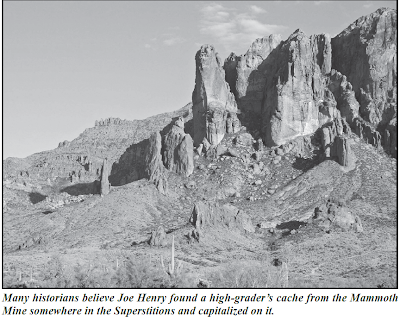 The following is a story that is on the side of myth, however one can still find substantiating facts that might support such a bizarre tale. The story goes something like this:

On a dark, cold January morning in the late 1920s Joe Henry (not his real name) was returning from Canyon Lake after an all night fishing trip. His luck had been bad and the continuous noise of the rough dirt road called the Apache Trail irritated him to no end. Near Government Well he blew a tire. As he stepped from his vehicle to survey the damage he realized his spare was also flat.

The Apache Trail was a lonely place to be 80 years ago. Joe Henry soon realized he had two choices; one was to remain with his vehicle and wait for help, or walk to George Curtiss’ place some 10 miles down the road. He looked at his watch; it read 5:45 a.m. Sunrise was still more than an hour away and there was little chance of hitching a ride before 10 a.m. Joe carefully fished out a pint of bootleg from his tackle box and began to walk toward Apache Junction. Near sunrise Joe Henry was almost frozen as he sat along the road resting. Around 6:30 a.m. the temperature had slipped down in the upper twenties. As he looked across the landscape toward Superstition Mountain’s northwest end he saw an unfamiliar glitter. After a couple snorts from his bottle he decided to check it out. He made his way toward the extreme northern end of Superstition Mountain. Resting momentarily near Silverlock and Malm’s old cabin, Joe could see in the distance a gleaming light that appeared to be a mirror.

As he hiked slowly up the slope of the mountain he could see a large mirror hanging from a Palo Verde tree. Nearing the base of the tree he could see a small opening in the ground. Joe Henry had always dreamed of finding a treasure, and a mixture of whiskey and a cold January morning had led him to the verge of making one of the most important discoveries of his life.

Joe Henry was a dirt-poor farm laborer who always worked for somebody else. Once a month he would go fishing up to Canyon Lake and hang one on. To make each of these fishing trip, Joe had to save every nickel and dime to do it.

It was January 1929, and times were good, but old Joe Henry had never succeeded at anything. Joe Henry had arrived in Arizona about 1922, shortly after World War I. He was an honest and dependable man except for one weekend a month. However, he always lacked the ability to find a good job.

Carefully, Joe Henry examined the hole in the ground that was 18 inches in diameter. Without any light, he couldn’t explore the hole, so he picked up the mirror and reflected the early morning sunlight into the hole. To his astonishment, he witnessed the dreams of many. There before him lay a treasure. Stacked neatly along the wall of the small cave were several rustic-appearing leather bags. He reached for the first one and pulled it from the cave. Excitedly, he opened the leather poke in the bag and poured its contents on the ground. Yes, Joe Henry had found a storehouse, a treasure of gold. There on the ground before him lay many gold nuggets, most very small. Quickly, Joe Henry gathered up four bags of the gold and headed for the Junction.

Some years later Joe Henry claimed there were some thirty bags in the cave filled with gold. Joe, on that January morning removed some 150 ounces of gold from the cave and packed it to Apache Junction. The  shortest route back to civilization was straight across the desert to Apache Junction. Once Joe reached the Apache Trail he was completely somber and hitched a ride into Apache Junction. He soon had his vehicle repaired. George Curtiss remembered taking Joe back to his vehicle and fixing his tire for him. Joe gave him a small nugget for his effort. Curtiss didn’t think much of it because a lot of the old timers would have small quantities of gold in nugget form. Joe Henry returned to his small cabin on the farm he worked at.

This may sound like the imaginative story of some treasure hunter however just after Joe Henry’s encounter with the glittering mirror and just before the Great Depression he was able to purchase a large farm in the Mesa area. Today Joe’s heirs are living in luxury from the fortune he found and turned into a successful farming operation. Many historians familiar with this story believed Joe found a Goldfield high-grader’s cache and capitalized on it.

Joe Henry claims he continued to search for the cache for twenty years periodically, but could never relocate it again. Until his death in 1974, he still possessed three of the largest nuggets from his find in 1929. Some old-timers did not believe the gold Joe had came from the Goldfields. Just maybe there is a gold cache located somewhere on the slopes of Superstition Mountain waiting to be discovered. There was plenty of high-grading (stealing of gold ore) in the Mammoth Mine during it hey day from 1893-1897.
Posted by Apache Junction Public Library at 10:40 AM