Read this post here.
Posted by Apache Junction Public Library at 12:00 AM

Fire Season in the Desert

Read this post here.
Posted by Apache Junction Public Library at 12:30 AM

The Charlebois petroglyphs site is probably the most maligned pre-historic rock-writing site in the Southwest. The site is located just upstream from the confluence of Charlebois and La Barge Canyons. Prior to the heavy pumping of the ground water in the Salt River Valley, the seeps and springs along La Barge Canyon were verdant oases for the early inhabitants of the region. The pre-historic Native Americans hunted Bighorn sheep, Mule deer, and other animals in the area. Archaeologists claimed it was the success of these hunts that were recorded on the canyon wall in La Barge.

Some time around the turn of the 19th Century prospectors and treasure hunters found their way into the Superstition Mountains. They cast their critical eyes upon on these figures carved in stone by the ancient hunters in La Barge Canyon and believed they had found an ancient Spanish treasure map. It wasn’t long before the petroglyphs were known as the Spanish Master Map. One man promoted this scenario more than any other individual. This man was John T. Clymenson (Barry Storm). Storm was not the only man to promote the Master Map in La Barge Canyon as Old Spanish rock writing. Oren Arnold used the Master Map in La Barge in some of his writings (1930-1972). Another man who never let the truth stand in the way of a good story was Barney Barnard. He called the petroglyphs a master map also. Most writers have included the stone writings in their books somehow.

I first visited the Inscription Rock, in 1954, with my father. Dad thought it was important to check it out. He studied the rock for a few minutes and was convinced it was nothing more than petroglyphs. I traveled to the site several times between 1954-1959. Each trip produced some new markings on the rock.

The petroglyphs in La Barge Canyon, known as Inscription Rock, require a nine-mile hike from First Water Trailhead. First Water Trailhead is located Northeast of Apache Junction on the edge of the Superstition Wilderness Area. Drive northeast on the Apache Trail (SR88) from Apache Junction 4.9 miles to First Water Trailhead Road (FS78). Turn right on First Water Road and drive to the parking lot, approximately 2.5 miles. Hike into the mountains on Dutchman’s Trail (104) to East Boulder Canyon, then over Bull’s Pass and down into Needle Canyon. Follow the Dutchman’s Trail (104) on into La Barge Canyon. Once you are in La Barge hike about 1.5 miles up canyon to the confluence of Charlebois and La Barge Canyons. The petroglyphs are located in La Barge about 200 yards up the canyon on a rocky outcrop on the left side of the canyon.


This is an eighteen-mile round-trip. Only those who are in excellent condition and experienced hikers should attempt this trip. The hike should only be made between the middle of November and the 1st of April. Always be sure to carry an ample supply of water. Charlebois Spring is an excellent area to camp and a good source of water year around. Please leave the petroglyphs as you found them. Only take photos of this Native American Inscription Rock.
Posted by Apache Junction Public Library at 1:00 AM

Just recently, a 67 year old man from California visiting the Mirage area was bitten by a Western Diamond Back rattlesnake when he was inspecting his RV. He had heard a strange noise under it.

A five-year-old girl was bitten by a Western Diamondback Rattlesnake in a dry wash along I-17 Highway north of Phoenix. She was rushed to the children hospital for treatment. This is a tragic way for us to be alerted to the dangers involving poison reptiles while we are in the outdoors during snake season. 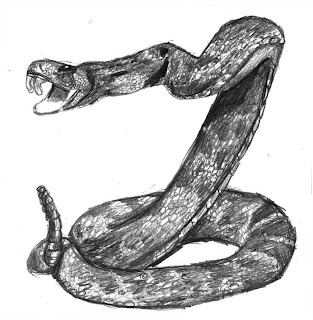 This year 2017, we are experiencing an extremely warm February and March. Rattlesnakes are out and moving about. Several sightings have been reported. The snakes like basking in the warm rays of the morning sun.

Reptiles, meaning most cold-blooded animals become very active when temperatures begin to rise into the mid-seventies and eighties. In the spring reptiles come out of hibernation and begin their search for food. August and September are traditionally the most active months for rattlesnakes on the Sonoran Desert at elevations below 4,000 feet. In late fall when temperatures drop below seventy-eight degrees reptiles begin to prepare for hibernation. I have lived in the Sonoran Desert for the past seventy years and I have encountered hundreds of rattlesnakes. If the truth were known, most of us who walk or hike in the desert will pass by ten snakes for every one we see. Under most conditions a rattlesnake is very difficult to spot unless it is disturbed and it moves. Rattlesnakes generally rattle before they move, but not always.

A rattlesnake can easily be identified by the triangular-shape of its head and the rattles on its tail. A closer examination will reveal an elliptical-shaped pupil in its eye. Believe me I don’t usually get that close to look! This trait is common to poisonous snakes of the Sonoran Desert. All rattlesnakes will have a pit organ near the nostril orifice. Rattlesnakes come in a variety of colors and patterns. Most rattlesnakes found in our area will have rings around their tails above the rattles. The color of these rings will alternate between black and white in various shades. The visibility of these rings will depend on the species. The Western Diamond Back rattler’s rings are very pronounced and stand out, where as the rings on an Arizona Black is not very visible because of the blending of the rings. Occasionally a rattlesnake will lose it rattlers; when this occurs, the difficulty of identification increases.

Rattlesnakes are ectothermic vertebrates (cold-blooded animals), meaning they lack an appropriate physiological mechanism for maintaining body temperature. All cold-blooded animals are at the mercy of their environment. The air and ground temperatures will dramatically affects all reptiles in their environment. This condition directly affects their daily rhythm of activity in their habitat.

There are six species of rattlesnakes in our area. They include the Western Diamond back (Crotalus atrox), Mohave (Crotalus scutulatus), Arizona Black (Crotalus vidiris), Black-Tailed (Crotalus molossos), Sidewinder (Crotalus cerastes), and the Tiger (Crotalus tigris). These animals have a very highly developed mechanism for injecting venom therefore making them very successful predators on the desert. A rattlesnake’s diet is composed of small rodents 82% to 85% of the time.

Reptiles, including rattlesnakes, like cool shady spots during the spring, summer and fall months. During the winter month’s, rattlesnakes generally go underground and hibernate. They usually choose caves and old mine tunnels. Occasionally dens of rattlesnakes have been accidentally uncovered by construction equipment and hundreds of rattlesnakes are found at one time.

You might say rattlesnake season is twelve months a year in the lower Sonoran Desert if temperatures rise above 72 degrees Fahrenheit in the winter months. Rattlesnakes are most commonly sighted from the first of April until about the middle of October. These animals are primarily nocturnal and prefer the hours after sundown and before sunrise. Most victims bitten by rattlesnakes are generally bitten ½ hour before sundown and up to two hours after sundown. It is estimated 72% of all bites occur during this period.

There are some interesting facts about rattlesnakes. The oldest known rattlesnake in captivity was 30 years and 7 months. This snake was a Western Diamond Back (Crotalus atrox). The largest rattlesnake officially recorded was an Eastern Diamond Back (Crotalus adamatus) at 7 feet 4 inches. The largest Western Diamondback was measured live at 6 feet 8 inches. There have been many wild claims about ten to fifteen-foot rattlesnakes, but usually these are snakes that were measured after death and their skin had been stretched. The average distance a rattlesnake can strike and effectively inject venom is approximately one-third of its body length.

How do you know a rattlesnake has actually bitten you and if the reptile injected venom? There are several signs and symptoms of envenomization. First there will be fang marks. These fang marks can be singular, dual or even a scratch. Fang marks are generally a very small puncture wound. A burning sensation usually follows the injection of venom by the reptile. A metallic or rubbery taste in the mouth often follows a bite, but not always. The tingling of the tongue or numbness can also occur. If a rattlesnake has injected venom into its victim, local swelling will occur within ten minutes. The amount of venom injected is generally indicated by the severity of edema or swelling at fang puncture site. Nausea and weakness is often associated with snakebite. Black or blue discoloration will generally appear near the site of the puncture wounds caused by the snake’s fangs after three to six hours. Every snakebite victim should be treated for shock. Shock is a greater threat to the victim’s survival then the actual venom of the snake.

The following is the recommended first aid for a rattlesnake bite. Call 911 immediately, snakebite is a medical emergency. If medical help is several hours away the following treatment is recommended. Calm and reassure the  victim and decrease the movement of the limb. Identify the snake if it is possible without further risk of another bite. It is not recommended to use a constricting band or tourniquet unless you are a medical professional. Many snakebite victims have come into emergency rooms with a constricting band, such as shoelace, completely obliterated by edema or swelling. It is extremely important to move the victim to a medical facility without delay.

The following are some things we can do to prevent rattlesnake bite.

When walking in the desert or in any area known for reptile habitation, always look where you step, or place your foot, or feet (Caution should always be used at night, late evening, and early morning). Always look where you are placing your hands or fingers. Use extreme caution before placing your hands where you can’t see what you are touching.  Always look before sitting down, especially around or near boulders or brush. Think before defecating or urinating in the outdoors. I have observed a variety of bites during the past fifty years that resulted from total lack of common sense. Small children must be closely supervised at all times in areas of possible snake infestation or inhabitation.

If you and your family observe these basic rules you should be safe from snakebite. Again, watch where you put your hands, feet and where you sit. As urbanization continues at the desert edge in Arizona the threat of snakebite is always a reality. Small children have become the tragic victims of snakebite in recent years because of little or no supervision by parents or responsible adults.

I have tried to be as thorough as I can with accurate information about rattlesnakes in Arizona. It is important to take note, the better understanding we have of reptiles, the better chance we have of not becoming a victim of snakebite.

Tom Kollenborn directed the Snake Alert program for the Apache Junction Unified School District for seventeen years. He attended workshops and worked closely with the University of Arizona Poison Control Center and Medical Center.
Posted by Apache Junction Public Library at 4:00 AM