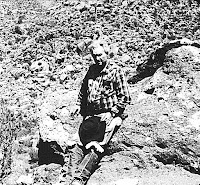 Read this week's article here.
Posted by Apache Junction Public Library at 6:00 AM

The first time I ever heard the story about the lynching of Starr Daley, it was from George “Brownie” Holmes. Holmes was a pioneer Arizonian. His father was born at Fort Whipple and his grandfather traveled along the Gila Trail in the late 1840’s. “Brownie” Holmes was a good friend of Nancy McCollough and Clay Worst. I am sure both of them heard the “Brownie’s” version of the hanging of Starr Daley along the old Roosevelt Road.

I was talking to “Brownie” one day. He mentioned that he was an eyewitness to the hanging of Starr Daley at 4 a.m. on Sunday, May 6, 1917. The hanging occurred along the old Roosevelt Road, just off the old Florence-Goldfield Road and four miles north of Dan Kleeman’s ranch in Pinal County.

“Brownie” went on to explain that Starr Daley, alias Van Ashmore, was 26 years old at the time he was lynched by a large group of citizen vigilantes. The story was interesting, so I continued to research it for several years.

I pieced together the following information from “Brownie’s” account, the New York Times article of May 6, 1917, and other information I was able to acquire:

James Roy and Florence Gibson were returning to Tucson on May 3, 1917, after visiting family in Globe. They were driving along the Apache Trail about 23 miles east of Mesa when they decided to camp for the night. They pulled onto the old Superior highway and drove for a few more miles before stopping.

Florence Gibson set about preparing supper, while James set up camp. Just at dark, a stranger rode in on a lathered-up horse. He was tired, and James Gibson offered him water. In return for this hospitality, Starr Daley shot James Roy Gibson in the back three or four times with a rifle. He then ordered Florence Gibson to disrobe, and if she didn’t obey, he would kill her also.

Starr Daley assaulted Florence repeatedly throughout the night. On Friday morning, May 4, Daley ordered Florence to feed him and load the car. Florence refused to load the car unless Daley would take her husband’s body to the funeral home for burial. Daley grudgingly agreed.

While driving toward Mesa, the car ran out of gas. Daley decided to walk to the nearest gas station, leaving Florence in the car with her dead husband. Florence flagged down the first person she saw and told them what had happened. The man she told was named Phelps. He reported the incident to Mesa’s Town Marshal Peyton. Peyton arrested Daley before he returned to the stalled car. Daley offered no resistance and was booked into jail on an open charge of murder and rape.

Friday evening, Daley wanted to talk. He told how he had acquired a rifle and murdered Roy James Gibson and raped his wife repeatedly. Six jurors had earlier found Daley responsible for Roy Gibson’s death. Florence Gibson was spared testifying about Daley’s assault on her. After the hearing, Maricopa County Sheriff Wilkey returned Daley to his cell.

Saturday, May 5, an angry crowd had formed in front of the Maricopa County Jail. By 10 p.m., the mob had grown to several hundred citizens. Sheriff Wilkey decided to transfer his prisoner to another jail. The sheriff loaded Daley into a car and started for Florence. The mob chased the Sheriff until they were able to overtake him. They were able to trap the sheriff near a bridge and take his prisoner at about 2 a.m. Sunday. They hauled Daley back to the scene of his crime, and there he would pay for his evil deed.

Starr Daley swung into oblivion from the back of a car at 6 a.m., May 6, 1917. At daybreak, his body still hung from the telephone pole of justice in the desert, just west of Superstition Mountain, along the old Roosevelt Road. A coroner’s jury from Florence held an inquest and ruled Daley’s death as “justifiable homicide, by hanging, at the hands of unknown parties.”

“Brownie” George Holmes later told me he drove one of Wes Hill’s stage line vehicles out to the lynching of Starr Daley. Was “Brownie” one of the actual participants of this hanging? I don’t know; he never said. But knowing “Brownie,” I doubt he would have physically participated in such a violent affair. This was officially the last lynching recorded in annals of Arizona history.

Caption: Starr Daley hanging from a telephone pole along the Roosevelt Road north of the Kleinman Ranch. The court ruled the hanging as a “justifiable homicide.”
Posted by Apache Junction Public Library at 8:21 AM