Christmas Eve at the Reavis Ranch

Read this post here.
Posted by Apache Junction Public Library at 5:00 AM

Educators in the Apache Junction Unified School District saw a need for an adult education program to enlighten local residents and winter visitors about Arizona’s history, culture, landmarks, people, and events. The area was experiencing a large growth in new residents and even a larger influx of winter visitors. The task of forming such a program was assigned to Tom Kollenborn, Community School Director, under Superintendent William F. Wright in spring of 1986.

The program was formulated and introduced in a series of six programs called the “Arizona Series” in October of 1986. The first series included six programs. The topics included “This is Arizona,” a geographical review of the state by Tom Kollenborn, “Arizona Archaeology” by Richard Hammon, “Arizona History” by Jim Swanson, “Arizona Fauna and Flora” by Jim Stipes, “Dangerous Animals of the Desert” by Dr. Marc Schmidt, and “Arizona’s Lost Gold” by John D. Wilburn. 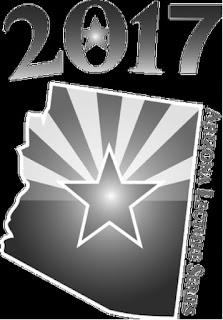 The first lecture series required registration and a ten-dollar fee for six lectures about Arizona. The series was originally designed to be a part of the district’s Community Adult Education program.

The community school had targeted a perfect market that was rapidly growing in the Apache Junction area. These new residents were extremely interested in Arizona history, places and events. This soon became a self-supporting program that was capable of funding scholarships and mini-grants to the classroom teachers and students.

The new Performing Arts Center could seat six hundred and fifty patrons. The total attendance for the entire series for the first year, 1992, in the auditorium was 3,267. During the years that followed we often had a full house at our lectures.

We contracted our speakers eighteen months ahead so we could develop sufficient advertising for the series. The series has contributed more than hundred thousand dollars to the high school scholarship fund during the past twenty-two years. The series has contributed close to fifty thousand dollars to the mini-grants for classroom teachers in our district. This successful program is dependent on volunteers who serve as ushers, tickets sales, and greeters.

Since 1986, more than 75,000 patrons have attended the Arizona Lecture Series in Apache Junction. Our patrons have strongly supported the series by purchasing 150 to 300 season tickets annually.

Today, attendance to the Arizona Lecture Series requires a five-dollar ticket or fifty dollars for a season ticket. The season ticket includes a minimum of thirteen programs.

I retired from the school district in August 2009 after thirty-five years. Linda Joyner took over the lectures series from 2010-2015. The Arizona Lecture Series continued to be successful during Ms. Joyner’s leadership. She moved to Michigan at the end of the 2016 season. Mr. Zach Lundquest will manage the 2017 Arizona Lecture Series.

Mr. Lundquest has a great season lined up for patrons of the 2017 lecture series. Season tickets are Fifty Dollars or $5.00 per show. Curtain call is 7:00 p.m. at the Apache Junction High School Performing Arts Center on campus at 2525 S. Ironwood Road. For information about the series call 480-982-1110 Ex. 2250. There will be twelve excellent programs this year.

My wife Sharon still faithfully attends the lectures and so do I on occasion. The Arizona Lecture Series and Public Events Series donates most of the money they raise to the scholarship program after expenses were taken out.

The Arizona Lecture Series at the Apache Junction High School is thirty-one year old and I am proud to have been a part of it.
Posted by Apache Junction Public Library at 5:00 AM