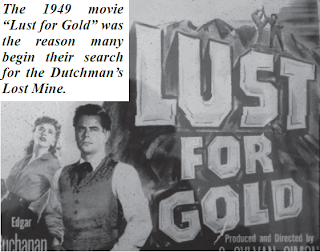 Early in 1947 Columbia Picture Corporation bought the rights for Barry Storm’s book “Thunder God’s Gold” with the intention of writing a screenplay and making the book into a motion picture. From the metamorphosis of a book to a motion picture considerable changes occurred. Ted Sherdeman and Richard English wrote the screenplay and the film was produced and directed by S. Sylvan Simon. The film was billed as the “true story of a secret treasure”. This film was meant to be Columbia’s competition against Republic’s film “Treasure of the Sierra Madres” starring Humphrey Bogart. “Lust of Gold” starred Glenn Ford, Ida Lupino, Gig Young, William Prince and Edgar Buchanan.

Portions of the motion picture were filmed on the studio lot, however a large percentage of the film was filmed on location along the Apache Trail. Many scenes were filmed in an area near the Salt River Project access road to Horse Mesa Dam.

The film opens with a spectacular scene of Superstition Mountain with an adventurer named Paul Buckley hiking toward the mountain. A narration describes how rugged the mountains are, how dangerous they are, and that many people had lost their lives in these mountains searching for gold. The film’s narrator talks about a cache of gold worth $20 million dollars hidden in these mountains. According to the story, the Apaches under the leadership of Cochise, killed the Peraltas and buried their gold.

The film then introduces a treasure hunter by the name of Floyd Buckley, who appears to know what he is talking about. Barry Storm is portrayed as the grandson of Jacob Waltz, the German prospector who had a rich gold mine in the Superstition Wilderness Area. Storm tries to talk Buckley into accepting him as a partner, but Buckley quickly brushes him off.

Buckley hikes off into the Superstition Mountains and is mysteriously murdered in an ambush. Storm had followed Buckley to the point where he was killed, but didn’t witness the shooting. He did hear the shot and found Buckley’s body. According to the film, Storm ran and walked 36 miles to Apache Junction to report the murder. Ironically, there is no place in the Superstition Wilderness, particularly the western portion that would be 36 miles from Apache Junction.

At this point in the film, Barry Storm begins his research about the infamous tale of the Lost Dutchman Mine. He travels to the pioneer’s home and finds out about Jacob Waltz. Here, the producer of the film inserts many of the stories about Waltz being a murderer. Storm found out at the Pioneer’s Home that the Lost Dutchman Mine and the Peralta Mine were all one in the same.

The film stresses the cactus marker with the stones in it as one of the key markers in locating the mine. This clue continues to surface today in a variety of stories about the Lost Dutchman Mine. The film also presents an interesting correlation between the sunburst, ORO, and snake on Black Top Mesa and the one in the film. According to the film Manuel, Pedro, and Ramon cached the gold somewhere in the Superstition Mountain where the moon shines through a window rock revealing its location.

Glenn Ford was far to young to portray Jacob Waltz who was 64 years old at the time. Waltz arrived in the territory from California in 1863 with the Peeples-Weaver Party and spent his first five years in the Prescott area before moving to the Salt River Valley in 1868. Most documents about Waltz indicate he was the opposite type of person the film portrays. Many sources reported Waltz as well liked and a kindly person. Records indicate he voted in every election after receiving his citizenship in 1861 in California. The film portrays Waltz as a vicious premeditated murderer.
This was absolutely not true. Every since I have been doing research on this subject some researchers have been constantly trying to prove Waltz was a murderer.

Much of this film is based on exactly what Barry Storm believed, but the problem is that Barry Storm’s research was not accurate. Barry, like a lot of researchers, developed facts that fit his own scenarios. 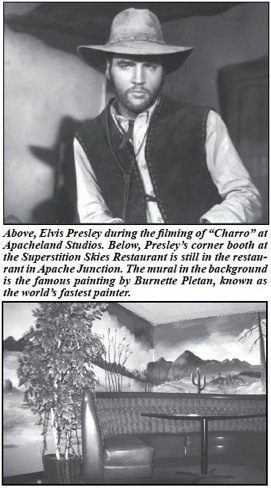 We found the band very upbeat and great to listen to. Once through the door we were introduced to some of the Superstition Skies past which is by all means a part of Apache Junction’s history. When I worked for the Barkley Cattle Company in the late 1950’s the “Skies” had just opened for business.

The “Skies” has a very interesting history. Some say a bordello operated out of the restaurant and bar in the late 1950s, however I cannot verify that statement nor was I a witness to such activity. The legacy of the “Skies” centers around two significant historical events. One was the many different Hollywood legends that visited the restaurant and bar during the filming of the many movies at Apacheland and the second was Burnette Pletan, known as the world’s fastest painter.

Stars like Ronald Reagan, Dean Martin, Jerry Lewis, Kenny Rogers and Marty Robbins ate at the Superstition Skies over the years. The “Skies” opened before the Superstition Ho Hotel, the Mining Camp and many other well-known establishments in Apache Junction. The “Skies” was open before the Apache Junction Dog Racing track on Main Street (Apache Trail).

The Superstition Skies is one of last real “honkytonks,” where it is not uncommon to see horses tied up at the hitching rail and cowboys with chaps and spurs standing at the bar, with country music being played by a jukebox or a live band.

Places throughout the Southwest such as the “Skies” are the heart and soul of America’s County Western music tradition. These restaurants and bars are the place were many great Country Western singers got their start. Men such as Marty Robbins, Hank Williams, Merle Haggard, and women such as Loretta Lynn and hundreds of more began their entertaining at the “honkytonks.”

Burnette Pletan was probably the world’s most prolific artist. He was certainly the fastest artist in the world with a paintbrush. Over the years I have marveled at his work. And his work has survived after his death. I had the pleasure of working with him when the school district sponsored the first Superstition Art Saga Fair in 1977. When my wife and I visited the “Skies” we were introduced to Pletan’s work again. If you have never seen his work, this is an excellent example of it at the Superstition Skies. This was Pletan’s last major project. He painted the walls all in one day, and the paintings are still there. Mr. Pletan was in “Ripley’s Believe It or Not” and “That’s Incredible.” He was certainly an incredible artist.

History and tradition are certainly a part of the “Superstition Skies’” menu in addition to good food. Take a little time out of your busy schedule and enjoy some genuine country-western music and good food. While you are at it take time to visit other great honkytonks and historic sites in Apache Junction such as the Mining Camp, Hitching Post, Mammoth, Filly’s, and Dirtwater Springs. They all have something special to offer in the nostalgia of old Apache Junction.
Posted by Apache Junction Public Library at 6:04 PM