Don Shade - A Man and His Dream 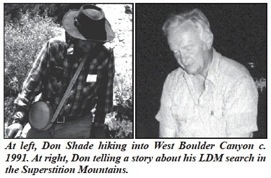 Since 1946 many individuals have played a significant role in the Superstition Mountain drama. One such person was Don Shade. Not everyone was close to Don and understood his love for the mountains. However, a casual conversation with him would definitely convince you of his love affair with the Superstition Wilderness and its many stories. I first met Don Shade in 1961. He was preparing to go into the Superstition Wilderness from the First Water trailhead. It was I who prompted our meeting. I could tell Don was a Dutch hunter just by the kind of gear he was packing into the mountains. We talked briefly and this began a friendship that lasted more than two decades. Don Shade was an old timer when it came to Dutch hunting. He began his search with men like Barry Storm in the early 1950s. Don considered Barry Storm a good friend. Don told me about how Barry moved the “Two Soldiers” story from the Mount Ord area to the Weaver’s Needle area. I recalled one time sitting on the porch of the Bluebird talking to Barry Storm and Don Shade. Don made a couple of trips with Barry to Arizona when he was selling books. I don’t recall what year these trips occurred, but I am guessing it was in the early 1960s.

Don Shade was a dedicated and systematic Dutch hunter. He was reluctant to share his information with anyone. The last several years of his life was spent at the O.K. Corral in Apache Junction. Don became a close friend of Ron and Jayne Feldman and he often helped out around the corral. When Don and I re-established our friendship Don talked about some of the more bizarre possibilities associated with the Superstition Mountains and lost treasure. He was always trying to solve the mysterious content on several maps, especially those with cryptic symbolism.

It was toward the end of 1980 Don Shade came across a cryptic map allegedly given to somebody by Marie Jones, the infamous adversary of Ed Piper’s near Weaver’s Needle. It was the same map Charles Kenworthy had analyzed by several different universities including UCLA, Harvard, MIT and Hebrew University in Israel because he believed the map was in some form of Hebrew. The origin of the map was and still remains unknown, however there were stories about its source. One story claims the map was originally found on a flat sheet of native copper. This sheet of copper had been rolled up and found buried in the Superstition Mountains at some undisclosed location. Kenworthy had worked on deciphering this map for several years.

Don Shade found the map extremely interesting. The origin of the map was never established, but Shade eventually pronounced the map authentic and placed it in his book, Esperanza on page 104. Don claimed to have located a worked out mine from the information he gathered from this map. The site of the mine was in a rugged tributary of Old West Boulder Canyon. Several years ago in late May I rode into the canyon and packed Don Shade and his camp out of this area. On this particular occasion Shade was really pleased to see me in his camp. It was getting hot, he was low on water and he needed to get out of the mountains. Don always kept sufficient supplies in camp. He always had lots of water hidden about his camp, however this had been a dry year. As I was packing his gear he said he could have lasted most of the summer if nobody had showed up to pack him out. He was seventy-six years old that spring.

Don Shade had some unusual methods that helped him to interpolate his ideas with other original information. It was this type of research that led Don to the site near Old West Boulder Canyon twenty- five years ago.

Don Shade never gave up his search for the Dutchman’s Mine. He did eventually publish his book, The World Famous Lost Dutchman Mine: Esperanza in 1994. Don Shade was an intelligent and interesting individual. You might find a copy of his book in the City of Apache Junction’s Library. He was a kind and honest person dedicated to history and legends of Superstition Mountain.

Donald Maurice Shade was born on August 28, 1915 in Hubbard, Iowa. Don was an outstanding athlete in high school. He was a four-year letterman in basketball and earned all-state honors as a shooting guard. Don attended college between 1935-1938 majoring in business law. Don Shade enlisted in the United States Army in 1940 and was discharged in 1946 as a Sergeant Major. Don fought in many of the major battles in Europe during World War II. Shade became fascinated with the Superstition Mountains and its many stories in early 1960’s. For more than thirty-five years Don Shade researched libraries and prospected the Superstition Mountains. Don passed away on November 3, 1996, ending an almost four decade quest for the Dutchman’s Lost Mine.
Posted by Apache Junction Public Library at 5:29 PM