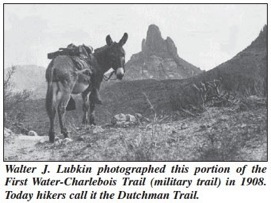 Since the early 1970’s there has been considerable research done about military trails through the Superstition Wilderness Area. First, before we discuss the topic of a “military trail,” we need to first define the term. When most individuals think of the term they think of a byway named and used by the military. Now the next question would be what military? Was it the Spanish Colonial, Mexican, Confederate or American army that named the trail?

If it were during the American Civil War we would have to consider both the Union and the Confederacy as a possible source. If a military group named the trail why did they do it? Was it a trail used to resupply a post or for marauding and raiding Native American camps in the Pinal, Mazatzal, or Superstition Mountains? If these questions can be properly answered then a designation of a military trail through the Superstition Mountain area could easily be assigned.

Many historians talk about a military trail from Fort Lowell in Tucson to Camp (Fort) McDowell on the Verde River through the Superstition Mountain region. This trail has been defined as going through Gonzales Pass up through Hewitt Canyon, then over Tortilla Pass and then north to the Salt River. This route has never made much sense because it is so rugged. The military could have remained on the flat desert with moderate changes in elevation all the way from Fort Lowell to Fort McDowell with only the Usury Mountains  between them and their destination. Even the Usury Mountains presented no problems for the military because they could have gone around them to the West or through a low saddle in the middle of the range.

Now, back to the question, was there a military trail through the Superstition Mountain region? If a researcher relied on military records he would have to say “yes.”

Between 1864-1868 during the Rancheria Campaign headquartered out of Camp McDowell there were many punitive expeditions in the Pinal and Superstition Mountains. Military sketch maps, basically hand drawn maps of each punitive expedition, accompanied all military reports made out by commanding officers.

Men like Capt. Bennett, Lt. DuBois, and Lt. Walker provided accurate and precise records and sketches of their campaigns against the hostiles. Many references on these maps mention variously named military trails used by the Army to subdue these marauding Native Americans. The most prominent trail was the trail that ran from the Salt River through the Goldfield Mountains coming out near Wolverine Pass across the Goldfield area to First Water then southeastward to Parker’s Pass, West Boulder Canyon, East Boulder Canyon, Bull Pass, down into Needle Canyon and over into La Barge Canyon to Charlebois Springs.

This area was often use by the military as staging area because of the water supply in the area. Also we must bear in mind these troops fought the Native American on foot. They were elements of the 14th, 22nd, 23rd Infantry Units, not mounted cavalry. The only mounted cavalry used in the Superstition Mountain area was when Major Brown led the 9th and 10th U.S. Army Cavalry. They were used in the campaign against the Apaches in 1872 and many of them were foot soldiers. There were several skirmishes around the Reavis Ranch Valley. The Apache often retreated to this area because of the permanent water supply along Reavis Creek.

Yes, there were military trails in the Superstition Wilderness Area, but most were only temporarily designated as such on military field sketch maps. Just about any trail used in the wilderness area during the Indian Wars could be referred to as a military trail. Most of the trails, but not all of them, were also used by the Native American long before the first white man arrived in this territory. The military basically used the Native American trails to subdue the hostile tribes.

This information should provide a little resolve for this question. The final analyses of this question still remains as to what you define as a military trail.
Posted by Apache Junction Public Library at 5:23 PM