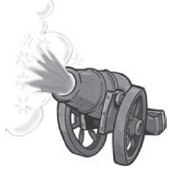 There are so many different stories and tales about the Superstition Mountains and the alleged gold mine that supposedly exist there. People’s imaginations have often been carried away because of what they think they see or read. Of course, interpretation has everything to do with the reality of a story. Our cognitive reasoning power is often put aside when it comes to lost gold and treasure stories. It is a lot like purchasing a lottery ticket. There is always that possibility of winning, but it is highly unlikely. The following story will give you an idea how the mind can play tricks on ones imagination and rearranges one’s common sense about reality and fantasy.

Some years ago a man who was well educated, but not necessarily rational, approached me in class I was teaching and told me a bizarre story about the Superstition Mountains and a solid gold cannon. He said the Spaniards had cast the cannon out of gold rather than bronze because the mine they had been working was so rich with bonanza gold. They had no bronze to cast a cannon according to the story teller. The Apaches, he said, continued to attack the Spaniards for several weeks so they hurriedly cast this “golden” cannon. I wanted to suggest to the gentlemen that a cannon, even a small cannon, would weigh more than a ton if cast of gold.

Let’s see... a cubic foot of gold weighs over 1400 pounds. Any cannon big enough to be effective would require at least a couple of cubic feet of metal, usually cast iron or bronze, depending on the period of time.

This is a good example how an intelligent person’s mind can be completely distorted by imagination. I had never before heard of a “golden” cannon being hidden in a cave in the Superstition Mountains. Some years later, while researching through periodicals in the Arizona Republic, I came across an article about a man who claimed to have discovered a “golden” cannon in a cave in La Barge Canyon. I read the article and checked the date. The article was written several years before I was approached by the man with the story about the “golden” cannon in the Superstition Mountains. I had believed this man had just dreamed the story up. But, when I found the article I thought it was strange that two different individuals dreamed up the same story.

Instinctively, I thought the man who approached me in class must have read the article and became enthralled by it. He figured out by himself the cannon was to heavy to move so the Spaniards just hid it in a cave. How unreasonable his judgement of the situation turned out to be. If the Spaniards had cast a cannon of gold that weighed around two tons, they could have recast it into gold bars then carried it back to Mexico City.

It never ceases to amaze me how many people will invest money in hair-brained schemes believing such outright lies which are nothing but the figment of somebody’s imagination. Over the years I have interviewed people who have lost their homes and their fortunes to unscrupulous con-artists. Although I will admit there are people who are not con-artists, but still believe these ridiculous stories.

It is difficult for us to comprehend how many people come to believe these distorted stories about the American Southwest. Many of these individuals claim legitimate historians are trying to hide all the treasure in the Southwest for the museums and archaeologists. Also the same individuals distort historical documents to fit their own stories and interpretation. When stories sound to good to be true, then you should really check out the documentation with some accredited source or university.

The tale of a Spanish “Golden” cannon in the Superstition Mountains still lingers around campfires being told by story tellers. I’ll never forget when the man said, “You can look up into this cave and see the barrel of this golden cannon sticking out.” He further indicated that nobody could climb the cliff to inspect the cannon. The cannon was at least 800 feet off the ground and probably 300 feet from the top of the cliff, a total of 1,100 feet. His imagination was working over-time. First, common sense would ask, how could anyone lift a twenty ton cannon to a height of 800 feet with hemp ropes? Next, there are few cliffs in the Superstition Wilderness Area over 1,100 feet in height. Just check out a good topographic map and see for yourself.

Common sense defeats this story except in the minds of the approving storytellers. Gold cannons are what dreams are made of...
Posted by Apache Junction Public Library at 5:25 PM