The Origin of the Lost Dutchman's Mine Story, Part 2 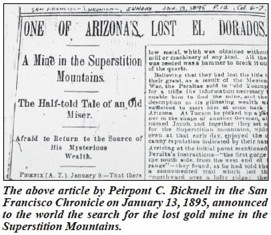 Spirits were high among the three very amateur adventurers searching for Waltz’ lost gold mine, but the tortuous summer heat and humidity soon took its toll. Toward the middle of the second week it was impossible to search accept in the very early morning or late evening. At the end of the third week the three explorers collapsed from exhaustion, lack of food and water. The search for Waltz’s mine was abandoned and the three returned to Phoenix exhausted, defeated and unsuccessful.

A local newspaper, the Arizona Weekly Gazette, noted the expedition with the following excerpt on September 1, 1892, “A Queer Quest, Another Lost Mine Being Hunted by a Woman.”

This prospecting venture reduced Julia Thomas to financial ruin. She and the Petrasches were destitute, having no source of income or a place to reside. Julia soon departed company with the Petrasches and married a farm laborer named Albert Schaffer on July 26, 1893.

At Schaffer’s encouragement Julia produced maps using what information she could remember. She became very resourceful and began producing excellent maps illustrating how to locate the lost gold mine of Jacob Waltz, her recent friend. These fraudulent sheets of paper were probably the first maps to the Dutchman’s Lost Mine. It is also quite apparent that Julia Thomas gave Peirpont C. Bicknell an interview about the Lost Dutchman Mine. Bicknell chronicled the mine in the San Francisco Chronicle in an article on January 13, 1895, making reference to most of Thomas’ clues. Now the story was out nationally that there was a lost gold mine in the Superstition Mountains.

The abandonment of the Petrasch brothers by Julia Thomas left them on their own. Rhinehart worked around Phoenix for awhile and eventually move up to Globe. He worked as a caretaker at an archaeological site in Globe for many years before committing suicide on February 5, 1943. Rhinehart was known as “Old Pete” around Globe and Miami. Herman had many odd jobs, first working as an apprentice blacksmith, then working for different cattlemen around the Superstition Mountain area. He was an excellent carpenter and worked at the old Reavis Ranch house for the Clemans Cattle Company in the 1930’s.

Hermann also repaired waterholes and windmills for the Clemans. He was seriously injured when a packhorse pulled his riding horse over backward along Hewitt Canyon in 1938. Hermann eventually settled near the bank of Queen Creek in the area of the Martin Ranch. The Martins looked after Hermann for many years. They would take Hermann to the dances in Superior where he would play his fiddle. Old Hermann had a host of friends, including my father. Newspaper reporters, authors, and magazine writers visited him from time to time and many articles were written about Hermann and his search for the old “Dutchman” mine.

My father and I visited old Hermann Petrasch on Queen Creek in October of 1952, during my freshman year in high school. I was more interested in baseball than I was lost gold mines at the time. He told us he was ailing a bit, but was still willing to talk with us. Hermann never complained about his aches and pains, he just endured. Herman Petrasch passed away on November 23, 1953.

I would like to clear something up about an old photograph taken of Hermann Petrasch in Queen Creek with a gold pan and shovel. The photograph appeared in Barney Barnard’s book, giving credit for the photograph to him. The person who actually took that photograph was Robert L. Garman, one of Hermann old friends.

The awful irony of the Petrasch- Thomas episode is that their journey into the Superstitions in the blistering hot days of August 1892 led them directly over the Black Queen and Mammoth mines that were discovered later that year. It was in April of 1893, four men discovered the famous Mammoth mine. That mine produced two million dollars in gold bullion when gold was worth only twenty dollars a troy ounce. Some historians believe the Bull Dog or Mammoth mine was the source of Waltz’s bonanza gold ore.

Julia Thomas and the Petrasch brothers were not successful in finding the Dutchman’s Lost gold, however, they initiated a legend that will likely endure forever.
Posted by Apache Junction Public Library at 5:28 PM