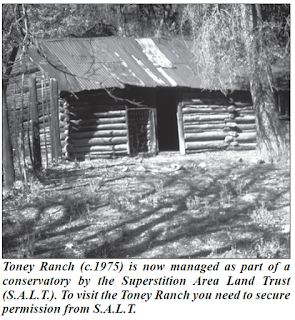 There is an old Indian story about Haunted Canyon. It’s a tale about where the sun introduces the sky to the wind. When the sun hides and the sky becomes dark, the wind blows through Haunted Canyon calling to the dead.

My friends, that is enough of a ghost story told to me by an old Apache many years ago while he was gathering Jojoba nuts in Haunted Canyon. The story convinced me Haunted Canyon was important to the Apache. Bear grass, agaves, jojoba, pinyon and acorns can all be found in the canyon. These were all staples for the Apache at certain times of the year.

Haunted Canyon has eroded down through a thick layer of limestone making the region susceptible to solution caves. These caves are often small and found high above the canyon floor. One large cave just below the old Toney Ranch goes deep into the mountain.

Many years ago a rancher found a skeleton of a bear in the cave. The cave was filled with stone arrowheads, again attesting to the use of the canyon by the Apache or other early inhabitants of the area.

We set camp about a hundred yards from the old Toney Ranch cabin. This chinked log cabin with its corrugated metal roof stood out among the sycamore trees in Haunted Canyon. At the time the old ranch was not occupied, but we chose not to stay in the house because of the mice, scorpions, black widow spiders and what ever else occupied the dwelling.

As the sun slowly fell below the western horizon the air began to cool. The sounds of the night filled the air. At first we heard the crickets; than an occasional frog, all of this was followed by a pair of serenading coyotes somewhere up the canyon from our campfire. We sat around the fire talking about chasing cattle and working on such a desolate ranch in the Superstition Mountain area.

We repeated the story of the “cave with a thousand eyes” and talked about how a man named Pete Moraga found this cave around 1900. We also told the story about another man named Perez who thought he found the Lost Dutchman Mine when he found the same cave in 1917.

Then there was the story of Modoc and his lost diamond mine in the Superstition Mountains. Modoc reported his find to the Mesa Journal-Tribune in mid 1930’s. The story was short-lived when everybody found out the diamonds were calcite crystals.

Many years ago the area was  filled with wild cattle and in 1968 there were still a few in the area. About the only way the old time cowboys could work cattle in this brushy nightmare of a range was with cow dogs. Years earlier I had ridden into this country with a friend looking for deer. After a couple of days riding the brushy tributaries of Haunted Canyon I was ready to return to the desert.

Cowboys who busted through this chaparral were called ‘brush whackers’. Cholla cacti are notorious on the desert, but Manzanita is worse. Broken Manzanita is brittle, very sharp and extremely hard. It is so hard it can easily pierce heavy work chaps, boots, even a horse’s hide or a cowboy’s leg.

Setting around a campfire helps conjure up ghost stories and tales about mysterious occurrences. This night was no exception around our campfire in Haunted Canyon. It wasn’t long before somebody was talking about the Apaches and some of those stories about Haunted Canyon. There was one story about an old prospector who was captured by the Apaches and hung upside down over a bed of hot coals just eight inches from the top of his head. This was one of the slowest and cruelest ways the Apaches killed their captives.

Time was always on the side of the Apache. As the old man dangled from a piece of rawhide he kept pulling his head from side to side trying to avoid the heat of the coals that were slowing baking his
skin and brains.

According to the storyteller, the sun introduced the sky to the wind. The wind soon brought heavy dark clouds. Lightning streaked through the sky and the thunder roared. Heavy rain began falling and the coals were soon extinguished. The sound of thunder, wind and rain made the Apaches abandon their helpless captive without further harm.

The rawhide began to loosen as moisture once again returned to it after the heavy rain. Somehow the old prospector was able to escape his bounds and return to Globe and tell his story.

Over the years I have returned to Haunted Canyon on several occasions and found the area undisturbed. I suppose the old ranch house has survived because of its isolation.

The last trip I made into Haunted Canyon was in the mid 1990s when I heard the area might be destroyed or impacted by a large open pit mining operation scheduled to begin operation in the area to the east.

I wouldn’t recommend trips into the area except from mid-October to the end of April. The summer months can be hot and water is extremely limited in the area.

Author’s note: There are articles about the Toney Ranch, the Cave of a Thousand Eyes, and Haunted Canyon, the Lost Modock Diamond Mine and others in years past. The Apache Junction City Library
may have copies of those stories available to read.
Posted by Apache Junction Public Library at 11:50 AM