The Search for Gold 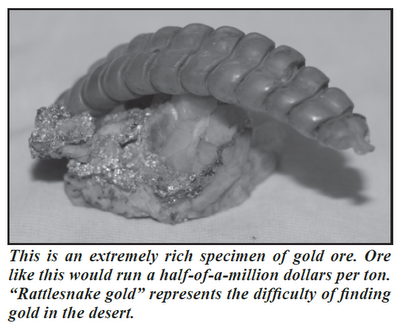 Man has searched for gold for thousands of years. It is a very soft and inert metal that is easy to work. Gold is also one of best conductors of electricity, explaining its use in electronics. One ounce of gold can be stretched into a fine wire some thirty-five miles long proving the extreme ductility of this metal. Gold can also be pounded into sheets so thin you can see through them again attesting to its malleability. This particular property allowed gold to be used for gilding over other materials such as stone, silver, lead, wood, clay, and many more. This property alone could explain huge gold statues that once existed in primitive civilizations or cultures.

The malleability of gold might explain the many tales of enormous golden statue in various civilizations of the world. Man continues to search for gold in the Superstition Wilderness Area believing the age-old stories of those who searched before them.

Seldom does a year go by that someone doesn’t claim they have found the Dutchman’s Lost Gold Mine in the Superstition Mountains. Of course nobody has produced any gold to substantiate these claims. The storyteller usually makes such claims as the gold had been removed before they found the site. Searching for gold in the Superstition Mountains has become primarily a solo vocation for those who are serious Dutch Hunters and not con artists.

We have our share of Dutch Hunters who continue to search for the Dutchman Lost Mine year around in this truly forbidding and sometimes dangerous land. The prospector or treasure hunter contends with completely different elements than the average adventurer or hiker.

The hiker travels on foot from one place to another. If they are a photographer they will always find a host of subjects to photograph in the Superstition Wilderness Area from landscape to wildlife. The prospector or treasure hunter is usually off the wellbeaten path looking for special clues that might lead to cache of gold, treasure or fit a special secret map. Most of them are trying to solve puzzles or riddles that have been created by those who have gone before them. They also study old and modern maps looking for clues that might guide them to their pot at the end of the rainbow.

Many prospectors and treasure hunters are somewhat paranoid about the dangers that lie ahead of them in the wilderness. They sometimes fear fellow prospectors or treasure hunter who might be following them to garnish information from their research.

Many prospectors and treasure hunters are heavily armed. They fall into three or four main categories. Prospectors are generally looking for placer gold or gold lode. They try to adhere to geological principles or apply common knowledge of known ore deposits in a given area. There are no known ore deposits within the Superstition Wilderness Area. Recent United States Geological Survey work indicates there might be deep-seated mineralized areas below 5,000 feet beneath the Superstition Wilderness Area.

There are also prospectors who believed Jacob Waltz, the alleged Dutchman, had a very rich gold mine located in the Superstition Wilderness Area. More than one hundred and fifty years of prospecting has not produced any substantial amount of gold. This in itself should be testimony enough that no rich gold veins lie near the surface within the wilderness. The continued search for the Dutchman’s Lost mine is total futility. The existence of a mine is the figment of many people’s imagination.

Now we must consider those who are constantly promoting ridiculous ideas that a rich gold deposit can be found if only the puzzles of several maps or the Peralta Stone Maps can be solved. We don’t want to disappoint you, but it’s apparent that most treasure hunters are in their own world. Most of the people who search for gold in the Superstition Wilderness Area enjoy an adventure. None have been successful in finding gold, but most have found beauty, peace, isolation and tranquility in the deep canyons and towering spires of this rugged mountain range.

There are a few people who search for gold who are paranoid and talk about Apaches that stalk prospectors and treasure hunters. They speak of Apaches that guard ancient ancestral burial sites. The Apaches have little real use for a place like the Superstition Wilderness Area. The only Apache I ever saw in the Superstition Wilderness Area between 1955-2010 were cowboys that once worked for Floyd Stone on the  Tortilla Allotment. Elmer Pope was an Apache cowboy from San Carlos, Ariz. He was only interested in horses, cows and payday.

To quote my dad, “Today’s memories were yesterday’s adventures.”
Posted by Apache Junction Public Library at 6:00 AM