The Wings of Santa Maria 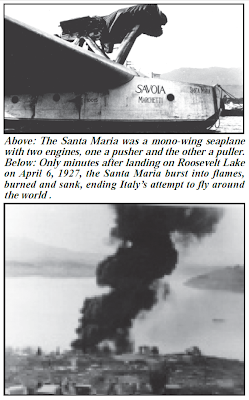 Colonel Francesco De Pinedo planned carefully for his flight around the world during the winter of 1926-27.
The Italian aviator would be flying a sea plane called the Santa Maria named after Christopher Columbus’ ship.

The Santa Maria was a mono-wing seaplane with two engines, one a pusher and the other a puller. The Franchini engines were water-cooled and the airplane was designed to lift a given amount of weight at sea level. This factor created a real problem for De Pinedo at Hall Lake in New Mexico because the lake was so much higher than sea level.

De Pinedo and his crew of three left Italy near the end of March 1927. His mechanic was Lt. S. Fachetti and Captain Carlo Del Prate served asco-pilot and meteorologist.

De Pinedo’s flight around the world carried him to North Africa, then across the Atlantic to the Amazon Basin then on to Colombia, across the Gulf of Mexico to New Orleans. From New Orleans De Pinedo flew across Texas to the Rio Grande Valley in New Mexico. He landed on Hall Lake, at Elephant Butte, New Mexico on April 5, 1927 at 3:15 p.m. MST.

Colonel De Pinedo had previously been presented the Grand Gold Medal by the Royal Geographic Society for his accomplishments in aviation. His crew was dedicated to him and Italy and this 1927 flight represented Italy’s first attempt to fly around the world.

In New Mexico, De Pinedo, a world famous aviator, presented one of the Santa Maria’s cracked propellers to Ettore Franchini, a representative of the Italian Colony known as the Colombo Society. The Colombo Society was an organization preserving the history of Christopher Columbus’ vovage to the New World. The presentation of the propeller was made on April 5, 1927, at Hot Springs.

Early on the morning of April 6, 1927, De Pinedo tried to lift the Santa Maria off Hall Lake. But, before he could become airborne he was forced to dump 250 gallons of fuel, tools and spare parts. The plan was to fly to Roosevelt Lake to refuel and then on to San Diego, California.

Colonel De Pinedo and his crew arrived at Roosevelt Lake about 11:50 a.m. on April 6, 1927. Only minutes later, Italy’s dream of having the first team to fly around the world was ended. By 12:15 p.m. the airplane was totally consumed by fire during refueling. A cigarette caused the fire that destroyed De Pinedo’s airplane and it sank below the surface of the lake within minutes.

The Franchini engines of De Pinedo’s plane were raised from the bottom of Roosevelt Lake on April 19, 1927. Members of the Christopher Columbus Society of Albuquerque, New Mexico recovered the engines. The three men most responsible for this achievement were Ettore Franchini, Tom Domenici and Pete Vichi.

A native Arizonian diver  named Charles Granger helped recover the Franchini engines from forty feet of water at Roosevelt Lake. The engines were eventually transported to New York and then shipped to Italy.

After World War II Ettore Franchini was awarded a gold medal by the Italian government for his part in helping return the engines. The engines were eventually used as a memorial to the De Pinedo flight around world that ended tragically at Roosevelt Lake.

When we look back on the accomplishments of this flight it was truly a monumental undertaking in 1927. Though the around the world attempt ended prematurely in Arizona, De Pinedo’s flight still recorded 16,000 miles across uncharted jungle, ocean and desert. This was quite an accomplishment for 1927 and only one month prior to Charles Lindbergh’s solo flight across the Atlantic.

General Francesco de Pinedo was killed in a fiery plane crash at the Floyd Bennett Field in New York while taking off to fly non-stop from New York to Bagdad on Saturday, September 2, 1933. He was one of this century’s greatest pioneer aviators.

Author’s Note: In 1993, I traveled to Albuquerque searching for information about De Pinedo and found a display and model of De Pinedo airplane at the Albuquerque Air Terminal. The display was maintained by an organization known as the Cavalcade of Wings. If ever you visit the Albuquerque Air Terminal you should look at this display. The search for more information about Francesco De Pinedo linked another part of the world to the Superstition Wilderness Area and Roosevelt Lake region.
Posted by Apache Junction Public Library at 3:00 AM