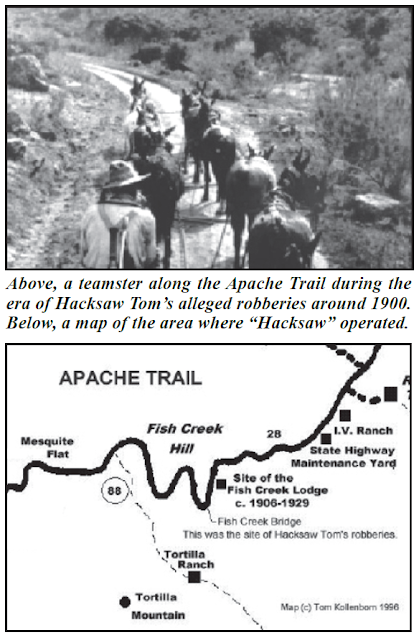 Stories can still be heard along the Apache Trail about the adventures of the legendary desperado “Hacksaw Tom.” It was after the turn of the 20th century this highwayman burned his name into the legends and lore of Superstition Mountain forever.

From remote hiding places near Fish Creek Canyon he preyed on the travelers of the Mesa-Roosevelt Road (Apache Trail). “Hacksaw Tom” robbed several of the teamsters who traveled the tortuous route between Mesa and the Roosevelt Dam site, according to legend.

At one point many teamsters felt they were paying a toll fee to cross the Fish Creek Bridge. Now, of course this is just legend, not fact. In all the years Hacksaw Tom preyed on the Apache Trail travelers, not one individual was injured or killed. As a matter of fact, not one individual can remember a shot being fired.

The real mystery of Hacksaw Tom was his identity. Some old timers claim he lived at the Silver King Mine in Superior and hiked across the mountains to make his periodical robberies at Fish Creek. Others thought maybe he was a local cowboy who supplemented his meager income with robbery.

An elderly retired lawman who was a friend of Jeff Adams thought Tom had a hidden camp deep in the Superstition Mountains, probably in Lost Dutch Canyon.

This canyon is a small tributary of Fish Creek that flows in above the Fish Creek Box. Several years ago two men explored a site in this canyon that appeared to be an old camp with metal detectors, but discovered nothing significant.

Whatever the case, Hacksaw Tom was never apprehended by the law. His camp, if he had one, still remains lost somewhere in the mountains. It is possible someday a lucky hiker or horsemen will stumble across Hacksaw Tom’s camp and discover his cache of loot taken from the many travelers of the Apache Trail. That is, provided he did not spend it all before his death.

There is not much documentation that supports this tale, however there were a couple of robberies along the Apache Trail that were unsolved and were noted in the Arizona Republican. The locations of the robberies have long since been forgotten, but it is apparent these old robberies may have given premise to the story of Hacksaw Tom.

Several years ago an Apache Junction resident discovered a cache along the Apache Trail that contained a hooded mask, saw-off shot gun, and other items. This discovery lead some people to believe Hacksaw Tom’s camp had been found and therefore documented his existence and exploits. These items are on display at the Superstition Mountain-Lost Dutchman Museum at Goldfield.

The tales of Hacksaw Tom continue to fascinate those interested in stories of the West. Several years ago a fine article appeared in the Arizona Highways about the legendary Hacksaw Tom.

The story of Hacksaw Tom s what legends are made of. They are tales that lie on that thin gray line between truth and fiction and become the folklore of Arizona history.
Posted by Apache Junction Public Library at 9:44 AM