Tribute to a Legend 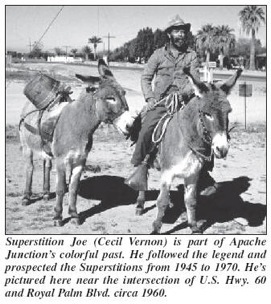 The legend and lore of Superstition Mountain has prompted a continuous search for hidden gold or lost treasure within the towering spires and deep canyons of this nationally known landmark for the past century. Men and women from all walks of life come to bid their luck against the elements and dangers of a mountain some men call “evil”.

A German immigrant named Jacob Waltz, supposedly started this contemporary search with clues about a rich gold mine that he allegedly hid within this mountain’s realm. These clues, after his demise, on October 25,1891, fired the imagination of the citizens of Phoenix and the surrounding countryside about lost gold in these mountains. These stories are centuries old now and they still tantalize the imagination of contemporary adventurers. A century of searching has passed since Waltz’s death and has produced no gold.

Only one other man has created such an interest and lust since Waltz’s death. This was Adolph Ruth. He did it by dying in the summer of 1931, alone in the heart of the Superstitions. Ruth’s sudden and violent death in mountains quickly replaced the headlines of “depression” news in major newspapers across the nation.

The list is endless of those men and women who have searched and died in this barren and rugged wasteland known as the Superstition Wilderness Area. Some threw their fortunes away just for an opportunity to search for this hidden wealth. All of them believed they would find that single solitary clue that would lead them to the golden cache, riches beyond the dreams of kings.

The Lost Dutchman’s mine is one of the most often found mines in the world, yet it is still lost. Since 1895, the mine has been found at least 150 times by a variety of individuals from all walks of life. The annual winter migrations of prospectors who descend upon the Superstition Wilderness Area only prove the interest that still exists in the mine today. This story is still America’s most popular lost mine story and continues to captivate the imagination of dreamers. This fanatic search for lost gold has driven some men to the brink of insanity and some even to suicide.

Some of these individuals have even organized complex corporations and implemented sophisticated electronic equipment to aid in their quest for the gold they believe is contained within the rocks of Superstition Mountain or its wilderness. Even with the advent of modern technology and the advancement of electronic metal detection equipment to aid in the quest for gold from the legendary Lost Dutchman’s mine continues to elude the prospector’s pick and shovel.

Hunting lost mines, in particular the legendary Lost Dutchman’s mine, is like chasing a rainbow, “so close yet so far away.” The search itself is a solo avocation among the most ethical and honest lost mine hunters.

These men and women share no information and ask nobody for assistance. Maybe it is not the finding that is so important to them, but the searching. It is a documented fact many an old-timer found pay dirt, only to sell it or lose it so he could return to his wander lust way of life. The source of gold and legends are where you find them, “out in the hills.”

The true Dutchman aficionados are definitely blessed with a certain amount of happiness and the rewards of adventure in the great outdoors. They spend countless hours, days, months and years around campfires speculating about the location of Superstition Mountain’s hidden wealth. As long as there are those who dream there will be Dutch Hunters and treasure hunters probing the towering spires and deep canyons of the Superstition Wilderness Area searching for lost gold and treasure.

Al Morrow spent nineteen years of his life living in Needle Canyon in the heart of the Superstition Wilderness searching for the Peralta Mines. He believed these mines and the Dutchman were one in the same. This man knew what happiness was and he most definitely knew the pain of loneliness among the towering escarpments of Needle Canyon. He found success in something that we are not able to measure, his was the simple everyday task of survival in this remote wilderness. Morrow chose this way of life so he could deal with nature firsthand and continue his life at this slow pace far removed from the complexities of urbanization.

He did this with great success and integrity. And he did it in an age where everything was based on material wealth.
It is difficult to imagine the likes of Al Morrow and other prospectors like him, who choose such a solo way of life despite the demands of modern society. Al Morrow marched to the ”beat of a different drummer.”

Superstition Mountain is a tribute to those people and their stories of hidden gold and the never-ending search for it. This mountain has become a fitting monument to these men and women who suffered the hardships of isolation, hard work and being different just to survive.

Maintaining a camp deep in the mountains required an enormous amount of work and the constant search for good water. However, the beauty and adventure associated with searching the lofty ridges and deep canyons for hidden wealth was well worth any exerted energy.

Just maybe someday a lucky man or woman will come forth with the gold of Superstition Mountain and forever end the tantalizing tales of lost gold within the boundaries of the Superstition Wilderness Area. The discovery will also vindicate all those who have believed in the legend. Jacob Waltz undoubtedly left behind the most lingering story ever told about lost gold in the American Southwest.

This is strictly a romantic view of the Superstition Wilderness Area and the life of early prospectors in the area, but as we face the future the significance and importance of the region will grow enormously.

Today the region serves more as a park than a true wilderness with more than 90,000 (estimated figures) people using the system trails this past year. The future and survival of the wilderness is totally dependent on the forest service’s management as the Phoenix metropolitan area grows. We will probably soon see the day access to the wilderness will be limited as more and more state trust lands are closed or developed.

Until this gold is found, the legend of Superstition Mountain is the stuff that dreams are made of. Dreams of hidden gold or personal enrichment it matters not because the opportunity to search has been worthwhile to the old timers.

While this legendary land of the old “Dutchman’s” lost mine has become a prime recreational resource for the Phoenix metropolitan area and old Superstition Mountain continues to remain as a tribute to a legend.
Posted by Apache Junction Public Library at 5:17 PM