From Dreams to Reality My father introduced me to one of the most important aspects of my life and that was historical preservation. Since those early days, I have been involved in a variety of community projects related to historical preservation. There was the historical designation of the Apache Trail, involvement with the Superstition Mountain Museum, the rededication of the Dutchman’s Monument in Apache Junction, and various publications over the years. My interest has always been associated with the Superstition Mountains; I’ve always tried to change dreams to reality.

I don’t recall the first time I hiked to the top of Bluff Springs Mountain, but it was with my father sometime in the late 1940s. I was attending Hill Street Elementary School in Globe, the spring my father and I climbed to the top of the mountain.

We drove out to the old Quarter Circle U Ranch and then hike up Bark Draw to the old Williams Camp then east toward Bluff Springs water trough and cabin. We started our ascent from the southeast end. I was worn out by the time we arrived at the base of Bluff Springs, but my dad wanted to climb to the top and into the interior of the mountain. My back pack was quite heavy, even though I was only carrying my bedroll, pillow and some water. Dad was carrying our food and other necessities.

We climbed over the southeastern end of Bluff Springs Mountain and hiked down into the canyon on top of the mountain. Dad wanted to camp near water so with hiked down into Bluff Springs Mountain Canyon and set camp near a pool of water. We had a small, two-man pup tent. Once camp was set, Dad rested for awhile then decided to do a little looking around. He suggested I stay in camp. However, in my spare time, I could gather of some wood for the fire. He also advised me to be very careful about snakes because it was spring time and they were out. 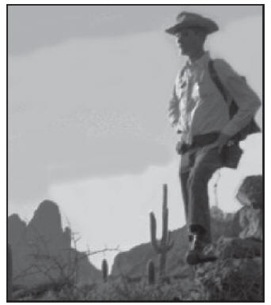 My father wanted to travel to Bluff Springs Mountain because he wanted to find something that was Spanish or Mexican. Something that would prove the Spanish or Mexicans were mining or prospecting in the area. Dad was checking out a story he was told by old Pete Petrasch who lived in Globe. According to Pete, he and his brother Hermann had a camp on Tortilla Mountain. Pete committed suicide about three or four years before our trip. Dad knew most of the old timers around Phoenix, Globe and Miami. He was always listening for another treasure story or tale that he could check out. Father loved to check out lost mine stories. It was his hobby and an opportunity for some recreation and outdoor fun.

I wandered around the camp site area searching for wood while dad hiked up toward the eastern facade of Bluff Springs Mountain. Petrasch had told father there were some steel rings embedded in the rock near the eastern edge of the mountain. When dad returned to camp, he said he found nothing that would confirm old Petrasch’s story. The next morning, we hiked down Bluff Springs Mountain Canyon toward the north end of the mountain. All I could think about was the long hike out of this country. We spent the morning hours looking around the north end of the mountain. We discovered some markings and maybe some very ancient petroglyph on an outcrop of black rock, probably basalt.

By 10, we were back in camp and packed up for the long walk out. Thank goodness I thought, most of our hike out would be downhill. We hiked down off the southeast end of the mountain to the Crystal Springs area then headed for Miner’s Summit. The hike from Miner’s Summit to the Quarter Circle U Ranch is a long walk, but most of it was downhill.

It was on hikes like these that I grew to love the desert. I was very fortunate to have a father who loved to take me into the hills and share his dreams and expectations with me. Dad never really believed the Dutchman’s mine existed, but he wasn’t going to leave anything up for grabs without checking it out. Basically this is how I was introduced to the tale of the Dutchman’s Lost Mine.

My father instilled in me the importance of historical preservation. He always said the cultural history of a region was worth preserving for future generations to explore and learn about. He constantly spoke about the many characters and their dreams of striking it rich. His dream certainly has been fulfilled with the construction and development of two museums in the Apache Junction area, especially two museums on the Apache Trail. I never forget the conversations he had with Jack Anderson before he died about someday having seeing museum in Apache Junction about our area. The Curtiss and Andersons in 1938 gave the Don’s Club of Arizona a perpetual easement on a piece of land they owned 50 feet by 100 feet to build their monument. One might say this was the beginning of the museum movement in Apache Junction. Yes, I agree this is stretching it quite a bit. Then again, maybe not! This was all started when I was born in 1938.

Today Apache Junction has two museums. One is located on the Apache Trail near Mountain View Road and the other is located in the Goldfield Ghost Town. Both organizations are preserving the unique history of Superstition Mountain and the surrounding region. I am sure your support of either or both of the fine organizations will help preserve the history of this area for future generations to enjoy.
Posted by Apache Junction Public Library at 5:14 PM