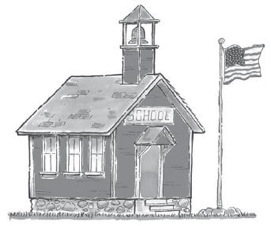 When people think of the first school in the Apache Junction area they instinctively think of Superstition Mountain Elementary School located on Broadway Road just east of Ironwood Drive. Construction began on this school in 1952, but Superstition Mountain Elementary School was not the first school or school district in the Apache Junction area.

The first school was established over one hundred years ago in the small gold mining community of Goldfield. The site of this once booming territorial town lies 4.4 miles northeast of Apache Junction on the Apache Trail (State Route 88).

The boomtown of Goldfield, Arizona Territory, appeared overnight after the discovery of gold along Goldfield Wash on April 14, 1893. This discovery of gold led to the development of the famous Mammoth Mine and Mill. The Mormon Stope, in the Mammoth Mine, produced more than 1.5 million dollars in gold bullion in two short years when gold was valued at $20 per troy ounce.

Goldfield grew rapidly. The town had three saloons, a hotel, mercantile store, butcher shop, boarding house, livery stable, barbershop, blacksmith shop and about three hundred residents. The one thing Goldfield did not have was a public school. Thirtyfour school age children lived in Goldfield by the middle of July 1893. The Phoenix Daily Gazette on September 12, 1893, reported Goldfield was in need of a school.

A request to form a school district was submitted to the Maricopa County Board of Supervisors to establish the Superstition Mountain School District. This request was delayed because of the controversy involving the political location of Goldfield. It was not known what county Gold- field was located in. This legal question had to be settled before a school district could be established.

Although the newspaper had reported thirty-four school age children resided in Goldfield, the board of supervisors did not act on the request for a school district. Mr. M. Lewis Spears open a private school in a small building constructed by the miners. Spears became the town’s first school teacher. He was shortly thereafter appointed Goldfield’s first Justice of the Peace.

The Pinal County Board of Supervisors apparently approved the school district by February 1, 1894 because the Mesa Free Press reported this date as the first day of school for thirty-six children in Goldfield. The Phoenix Daily Herald reported Mr. M. Lewis Spears as teacher at Goldfield School and stated he had twenty-one students in his class. According to the article, he was also serving as Justice of the Peace for Goldfield. Newspaper articles indicate Mr. Spears served as schoolteacher in Goldfield from September 18, 1893 until September 13, 1894. Spear’s private school served as an interim school until the Pinal County Board of Supervisors formed the Superstition Mountain School District in the Spring of 1894.

On June 16, 1895, Ms. Agnes Dobbie, Tempe Normal Class “95” was hired by the Superstition Mountain School District’s Board to teach the 1895-96 school year at Goldfield. Ms. Dobbie taught two years before resigning in June of 1897 to get married.

Ms. Holmesley was hired in June of 1897 for the 1897-1898 school year. It was during Ms. Holmesley’s tenure that the Goldfield Mines began to decline. When Ms. Holmesley dismissed school for Christmas vacation on December 22, 1897, only eight students were attending her classes. The real mass exodus of families from Goldfield had begun by December 20, 1897.

It was clear the mines had failed by January 3, 1898. When Ms. Holmesley reopened school on January 3, 1898, she had only nine students. The school board had resigned and moved away by the middle of January. The county school superintendent appointed Charles I. Hall and John Mechan to serve on the school board of trustees.

When the Richards family moved to Wickenburg on January 27, 1898, only seven school age children remained in the Goldfield School District. The Goldfield School closed it doors in May of 1898, never to open again to the voices of children learning and playing together.

Goldfield School served the needs of the early miners and their families at a time when Arizona was a territory of the United States.

It is interesting to note that public education played an important role in the lives of these people when gold was “king” at Goldfield. These hard working Americans realized the greatest resource our nation had was our children. They were willing to take that step forward and support education at the turn of the century. It is certainly no different today. We are all obligated to support public education today so we can prepare students for the future.
Posted by Apache Junction Public Library at 5:16 PM