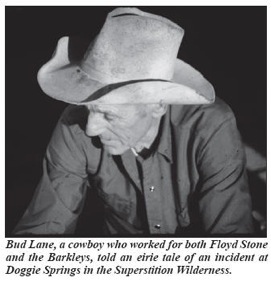 There are many interesting stories about the Superstition Wilderness Area. Some tales are believable and others are not. The following story was told to me by an old cowboy named Bud Lane many years ago. Bud had worked for both Floyd Stone and the Barkleys. One evening, some time in the late 1970’s I was riding with Bud over the Apache Trail.

We were headed for the IV Ranch where we were taking a group of riders to the Reavis Ranch from Floyd Stone’s IV Ranch. As we rounded Inspiration Point and looking into the vast emptiness of Fish Creek Canyon we saw a brilliant meteor tracking north to south across the sky near Castle Peak. The meteor was so bright the light was reflected by Castle Dome Peak. It was at this point Bud spoke up and told this story.

“Tom,” he said, “all the crazies around Apache Junction and the mountains are always talking about flying saucers. I am not going to tell you I believe in flying saucers, but this really happen to me. I’m going to tell you a true story, but I don’t want you to ever repeat it until after I am dead and gone. First, I want to tell you I have never seen a flying saucer drunk or sober, and if I had I wouldn’t admit it for fear people would think I am a lunatic.”

At this point, Bud cautioned me again never to tell this story until he was dead and gone. Bud continued the story something like this. He said he was working some stray Mexican steers for Floyd Stone near the upper end of Tortilla Canyon above Doggie Springs. He planned on riding until dusk then working his way back to the Tortilla ranch house. Close to dusk he said, “Tom, I heard this whining roar that was so loud it was deafening. It even vibrated my lungs. All of sudden back toward Doggie Springs I saw this object rise into the sky so fast I couldn’t recognize what it was. Actually I thought it was some kind of a volcanic eruption. The object was gone in a split second.”

Bud further explained he had ridden all around the area trying to confirm what had happen. He found nothing to support what he had seen. He told me he was not suffering from illusions and he didn’t have a hang-over that day. Bud said he continued looking around the area every chance he had when he was in the region. Some ten or twelve years later Bud said he was in the area and found an interesting formation on the ground. On the side of a sandy wash he found a ring of sandy glass about ten feet in diameter. He was convinced this sandy glass ring wasn’t a geological feature. He believed the glass ring was formed from extreme and sudden heat. The heat, he believed, was produced by a rocket launch or something similar. I had known Bud since 1965, and he had always been exceptionally truthful with me. However, Bud was known to tell dudes a few tall tales when he worked for Billy Crader’s Safari Wilderness Trips.

This was a very puzzling and intriguing story that would be impossible to prove unless the melted sand ring could be found. Bud indicated it was located somewhere about Doggie Springs. I have ridden into Doggie Spring several times over the years and found nothing. Tom Jarvis, Maricopa Deputy County Medical Examiner and I spent an entire day riding the area and searching for this melted sand ring.

Several years later a hiker tried to sell me a piece of melted sand, much like sand that has been melted by a lightning strike. When he told me it came from the Doggie Springs area I immediately became more curious. He said it appeared at one time this piece of melted sand and glass had been part of a large circular piece material. He further stated he didn’t really know what it was, but he was -quite convinced it was part of a lighting strike. He gave me directions to the site, but I never found it. I am quite sure the site had been damaged from flash flooding over the years which made it difficult to recognize.

The story still fascinates me because Bud was such truthful story teller; unless he was just joshing you around. But, he would always relent andlet me know he was just joking. He never relented and said he was just telling mea tall tale when it came tothis story about an unknown melted sand ring near Doggie Springs.

I am sure Bud probably told this story to others. There are numerous stories about unusual things occurring in the area. I still wonder if this is a true story about some unusual occurrence in the Superstition Wilderness Area or a powerful lightning strike caused by ground to cloud lightning.
Posted by Apache Junction Public Library at 5:13 PM