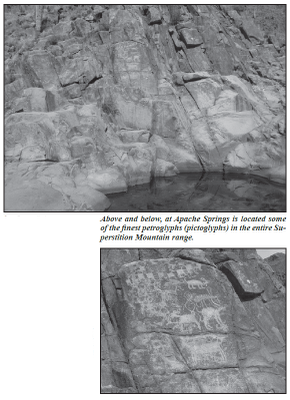 The Superstition Mountains have long been hunting grounds for a variety of Native Americans who wandered this region since the beginning of time. Their silent legacy remains today in rocky ruins, cliff dwellings, grind holes, and petroglyphs.

The deeply incised canyons of the Superstition Wilderness Area provided an ideal hunting ground for these Native Americans. A thousand years ago the climate could have been damper than it is today therefore providing an even wetter environment than we are familiar with today.

At Apache Springs, on the southwest end of Superstition Mountain, is located some of the finest petroglyphs  (pictoglyphs) in the entire Superstition Mountain range. The west wall of this canyon is covered with Antelope, sheep, deer, snakes, lizards and geometric patterns. Most of the images were composed of animals. They were significant in these early Native Americans’ diet and the geometric patterns probably had some kind of significant use in their religion.

Apache Springs is not the name most Superstition aficionados are familiar with. Apache Springs was changed to Hieroglyphic Springs shortly after the turn of the 20th century. Will Robinson referred to the original name of these springs as early as 1918 in his book, “History of Arizona.” Most early maps of the area do not attempt to identify the springs or canyons along the western façade of Superstition
Mountain. Whoever named Hieroglyphic Springs originally did not know the different between hieroglyphics and petroglyphs. Petroglyphs are indigenous to the American Southwest, while hieroglyphics are found only in Egypt. The name was colorful and added charm to this desert country near Dinosaur Mountain. The misnomer was very misleading to scholars of the Southwest and Egypt.

These petroglyphs are located about a mile and a half east of King’s Ranch Resort. Today there is a large paved parking lot at the east end of Cloud View for hikers. On some winter weekends the parking lot is filled to capacity.

The unique thing about these stone writings of Hieroglyphic Canyon they provide the visitor with a walk through an ancient art gallery created almost a thousand years ago. We must all protect and respect this unique gallery of those who have gone before us.
Posted by Apache Junction Public Library at 1:59 PM