All the Gold in Arizona 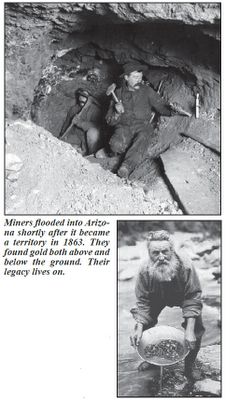 Arizona became a territory of the United States during the American Civil War when President Abraham Lincoln signed the Organic Act for territorial status on February 24, 1863. Prior to 1863, Arizona Territory was a part of New Mexico Territory. The Civil War between the North and South forced the formation of the territory because the Confederacy had drawn a boundary line east to west near the 108th  meridian forming a confederate territory in 1862.

The first gold prospectors arrived in Arizona Territory around 1863. Most of these men had traveled through  Arizona Territory on their way to California during the Great Gold Rush of 1849. It was under the leadership of John Walker that some of these men returned to the mountains of Arizona to search for gold. The conditions in Arizona Territory were dangerous and very primitive. The Apaches preyed on the prospectors and supplies were in short demand. These prospectors found several good gold deposits in the months that followed their arrival in the territory. Gold was discovered at Rich Hill, Wickenburg, and in the Bradshaw Mountains. Eventually prospecting parties were sent south toward the Rio Salinas (Salt River) and the Rio Gila.

The first prospecting parties to examine the rolling hills immediately west of Superstition Mountain was in the winter of 1864. John Montgomery and a man named Binkley found an outcrop of quartz filled with fine gold near the present site of the Bull Dog mine. Their find was short lived. The gold stringer soon played out and then they were attacked by a band of hostile Apaches. The ensuing battle convinced the two prospectors they were lucky to escape the area with their lives.

The loss of the small quartz vein near Superstition Mountain did not discourage these two hardy prospectors. They knew gold was much more plentiful in the Bradshaw Mountains near Fort Whipple. A year later (1865) Camp McDowell was established along the west bank of the Rio Verde. The United States Army, with the aid of the Pima Scouts, brought an uncertain peace to the area for five or six years.  Settlers began moving into the Salt River Valley by 1966. Many of these pioneers were farmers who wanted to acquire hay contracts from the Army at Fort McDowell.

The miners around Prescott and the Bradshaw Mountains were soliciting Territorial Gov. John P. Goodwin to raise a militia to protect the miners from the predatory raids of the hostile Native Americans in the area. When this protection finally came the gold production of the Bradshaw Mountain increased significantly.

The gold fields west of Superstition Mountain were ignored for several years because of the hostile Apaches. John Montgomery eventually moved to the Salt River Valley from Prescott and became a highly respected peace officer in the village of Phoenix. Montgomery’s partner, Binkley, wondered off into obscurity.

Some time after the Peralta mishap in 1879, three Mormon prospectors staked the Lucky Boy claim immediately west of Superstition Mountain. This claim was staked in 1881. The old Iron Horse claim just off First Water Road is the old Lucky Boy claim. The Lucky Boy was followed by many other claims over the years. The Black Queen was a rich deposit of gold. It was staked in November of 1892, but the bonanza of the gold fields was the Mammoth Mine staked in April of 1893. The fabulous Mammoth Mine was located and the rich Mormon Stope discovered. This hole produced approximately three million dollars in gold bullion between 1893-1897 when gold was worth $21 an ounce.

The mining history of Arizona was a fertile place for tales of lost gold and buried treasure to emerge. The territory was rugged and the Apaches were fierce. From this backdrop came prospectors and treasure hunters from around the nation and world.

No story of lost gold is complete without the tale of the Lost Dutchman mine. This old German immigrant, his burro, and Superstition Mountain have left a legacy that has become "all the gold in Arizona."
Posted by Apache Junction Public Library at 1:52 PM