The Other Side of the Mountain 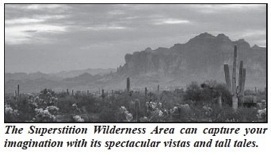 The Superstition Wilderness Area, like many other places in Arizona, can capture your imagination with its spectacular vistas and tall tales. There are stories about lost gold mines, secluded cabins, unexplored caverns, unknown archaeological sites and seldom-visited campsites.

National television has looked at the Superstition Mountains with hope of finding stories about ghosts or other unexplained phenomena. What they have found is nothing more than just stories. Legend and myth is a healthy ingredient of American folklore. Each American locale has its special stories and myths about the unknown and the unexplained.

Since childhood I have heard many stories about the unusual events occurring in the Superstition Wilderness Area. These tales range from “blue lights” to tremors in the ground. I was once told about a place in the mountains where molten lava could be seen through a small portal flowing deep beneath the surface of the Earth. Several years ago an old time cowboy of the area told me about a spot he found in the mountains where the sand in the wash had been turned to glass when it was superheated by something. He suggested a flying saucer could have taken off there. I have talked to men who claim to have seen UFO’s land; little green men got out; sampled the vegetation and soil.

I have been told about dinosaurs living in caves deep in canyons located in the mountains. I was also told about a tiger that lived in a cave behind a waterfall. Another interesting story was told about Bigfoot in the Superstition Wilderness Area near the Reavis Ranch. A man named Biscardi from California was convinced Bigfoot lived in the area around the Reavis Ranch in the 1980’s. I could go on, but I don’t believe it is necessary. Are all these stories just outright lies or is there something to some of them? Many of these stories are the basis of legend and myth.

I could never locate any “blue lights” in Trap Canyon even though I spent three nights there one time. I have felt and even heard “the tremors” on several occasions. I have always been told these tremors can be attributed to either seismographic activity or blasting the Pinto Valley Mining area.

I could never find the site of the “lava flow.” The story is feasible because the entire Superstition region is of volcanic origin. Some volcanic activity occurred as recently as three million years ago. The story the cowboy told me about the glass ring in a wash could have been caused by a lightning strike. At least lightning is a logical explanation for such phenomena.

Alcohol, prescription drugs or “whacky tabacky” are known to bring on illusions about UFO and dinosaurs. The tiger in the cave behind the waterfall is another type of illusion that haunts the human mind. Simply lying for attention could bring on many of these stories.

The man from California searching for the American Yeti was probably legit. He sincerely was misled by somebody he respected as knowledgeable on the topic of Bigfoot in the Superstitions. There are no Yetis in the Reavis Valley. Biscardi would have been hard pressed to even find an occasional Black bear in the region.

Many of these stories I have on tape. I find them an interesting experience with human nature and imagination. Most phenomena within the Superstition Wilderness can probably be explained by reasonable logic. Of course these days, who’s reasonable? We have tendency to believe the way we want to believe regardless of the facts. If only the facts were believed then there would be no legends or myths.

All these stories have been interesting whether truthful or just misinterpreted. I have enjoyed exploring the source of these stories and listening to them be told. Any campfire surrounded by old timers will produce a wide range of legends, myths, and stories about the Superstition Mountains. The topics will range from treasures, crystal skulls to lost underground cities. There is such a wide variety of topics to tell tales about. Many storytellers just make up the stories as they go along.

There are stories about the Black Legion, a group of militant Native Americans, who protect the sacred burial grounds on Peter’s Mesa. They are well trained in traditional Apache culture and their purpose is to prevent looting and robbing of their ancestor’s graves.

These sacred burial areas are within the confines of the Superstition Wilderness Area. Does the Black Legion actually exist? I do not know, but there are those who claim it does exist. Its sole purpose is to make the thieves of time responsible for their illegal actions. Some claim they leave rabbit fur and the feather of a raven to mark the area they are protecting. Again, my friends, this is just another story.

The Superstition Wilderness Area is a fascinating locale. Its legacy is filled with myth and folklore. All stories need to be taken with a grain of salt until proven objectively.

The granddaddy question of all is, does the Dutchman’s Lost Mine exist? I can honestly say I don’t know. I have been on many pack trips, expeditions, and hikes with known Dutch Hunters and listened to their ideas and thoughts about the mine’s existence.

A consensus of their ideas would indeed fill a book and maybe verify the mine’s existence. It is for this reason the mine is still part of folklore and myth. Nobody has been able to prove beyond a reasonable doubt the infamous Dutchman’s lost mine exist, however hundreds believe in this mythical lost mine. Maybe it is not a mythical lost mine after all!
Posted by Apache Junction Public Library at 5:57 PM