Wildlife in the Superstitions 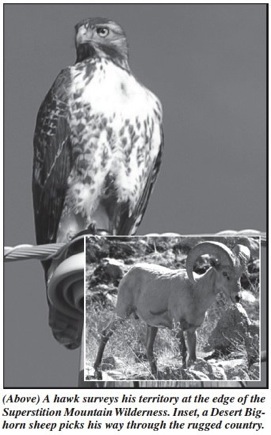 Prior to the turn of the 20th century, Desert Bighorn sheep and the Desert Antelope could be found in plentiful numbers around the base of Superstition Mountain. Today the antelope has disappeared. The Desert Bighorn sheep have been reintroduced to the Superstition Mountain area, but the numbers of sheep have dwindled considerably since their reintroduction.

The sheep’s greatest predator is the Mountain lion. When the sheep were numerous in the area, the sound of butting of their horns during rutting season could be heard throughout the canyons on the west face of Superstition Mountain. The early Native Americans who lived here, perhaps a 1,000 years ago, left remarkable images of the Desert Bighorn at Hieroglyphic Springs.

It is difficult to visualize giant rams bounding up and down the rugged cliffs of Superstition Mountain or Desert Antelope running across the flatlands south and west of the mountain. Old timers tell us the last Desert Bighorns were poached during the 1930’s. The last Desert Antelope reported killed in the area was in 1903. A limited number of Desert Bighorns were introduced into the area during the 1970’s. Last winter my wife and I stopped along the Apache Trail near Apache Gap and watched five Bighorns on the side of the hill grazing. Their presence created a traffic jam on the Apache Trail.

These two species were driven from their natural range by three major causes. One was over-hunting, two was the introduction of domesticated grazing animals, and three was encroachment of urbanization. Near the turn of the 20th century meat-hunters decimated the remaining animal populations in the area with modern long-range firearms using smokeless powder. Overgrazing by cattle destroy much of the land for native animal populations.

State and federal agencies attempted to manage game and range resources in the 1920’s and 1930’s. Their efforts in the beginning were feeble to say the least. The hunting and poaching of animals within the wilderness became somewhat controlled by game wardens. Even today there is insufficient human resources to manage the wildlife of the wilderness area. Beginning in 1909, when range management was first implemented it did help provide sufficient browse for domesticated stock and wildlife.

Controlled hunting seasons for Mule deer, White Tail deer, Peccary and other species of game animals insured a future for game hunting in the wilderness area. However, without game and range management in the early days there would have been a very dim future for wildlife in the region.

The Peccary (Javelina) is common to the desert uplands where the Prickley Pear cactus can be found in abundance. The Peccary, weighing between 35-45 pounds is one of the most sought after game animals in the region. Each February thousands of hunters take to the field in search of this elusive desert animal. The region near the Tortilla Ranch is an excellent range to spot a Peccary.

The remaining two large mammals of the Superstition are the Black bear and the Mountain lion. The Mountain lion ranges primarily in the eastern portion of the wilderness, but can be found through out the area. The Mountain lion is rarely spotted unless pursued by hunting hounds. Some claim the lion population has been dramatically reduced during the past three decades. Others will tell you there are more lions today then ever before.

The Coyote is one animal that continues to survive despite the efforts of man to destroy it. He has adapted well to urbanization around the fringes of the Superstition Wilderness. Coyote numbers continue to increase while their range is being inhabited more and more by man.

To the Native American, the Coyote is God’s dog. To the cattleman and sheep man the coyote is a ruthless killer of young calves and lambs. To the environmentalist he is the salvation from plague and Hanta virus infected rodents. The Coyote has numerous enemies and many friends. There are many pros and cons about the animal’s future control within our area. His lonely call continues to sound through the canyons and from towering spires of the Superstition Wilderness. I have been listening to the call of the Coyote for more than fifty years in and around Superstition Mountain. I still love to hear their mournful call on a full moonlight night.

The future of wildlife preservation in the Superstition Wilderness will depend largely on impact control and the education of the public. Today almost three million people are living in the Valley of the Sun or the greater Phoenix metropolitan area. The urban pressures created by this rapidly growing population forces more recreation eastward each year toward Apache Junction and the Superstition Wilderness Area. The wilderness is not an unlimited resource capable of withstanding the urban impact created by the greater Phoenix metropolitan area. Each year thousands of more people are looking for recreational area for the weekend. The Superstition Wilderness Area has become such an area.

Eventually the Department of Agriculture will have to closely regulate access into the wilderness. Without access control the wilderness and its wildlife will have a very dim future. After all, what is a wilderness experience? Isn’t it a place you can go to avoid crowds? To protect this wilderness the public must be educated about its care.
Posted by Apache Junction Public Library at 5:56 PM