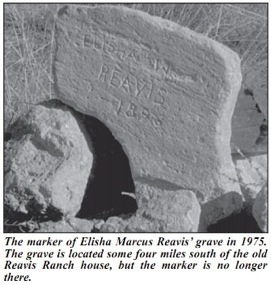 Grave markers or grave stones are quite rare within the boundaries of the Superstition Wilderness. I recall a few, but most of these have been totally obliterated. Fifty or sixty years ago there was a very primitive marker at the gravesite of old George Miller and his two partners. Twenty years ago all that remained of this marker was a steel fence post driven deep into the ground. I doubt this old steel fence post marker can be found today. Miller was buried in April of 1936.

Another very old marker lies near the old Kennedy Ranch on the eastern extreme edge of the wilderness area. According to stories, this was the grave of an old cowboy who wanted to be buried on the range he worked most of his life. I have heard this story from more than one old timer. Many of these gravesites are keep secret because friends or relatives do not want the sites vandalized or disturbed.

Probably one of the oldest markers was that of Elisha Marcus Reavis’ grave in what the forest service now calls Grave Canyon. Reavis’ grave is located some four miles south of the old Reavis Ranch house along the trail to Roger Trough Trail Head. The grave no longer exhibits a stone marker.

When I first visited the site in late 1960’s the stone marker was on Reavis’ grave. The marker read Elisha M. Reavis 1829-1896. Somebody had scratched this information into a stone. When I visited the site of the grave again in 1975, the stone marker was still in place. When I returned to the gravesite in the mid-1980’s I found no marker remaining on the grave. The last time I visited the gravesite in late 1990’s I found no marker on Elisha M. Reavis’ grave.

There are several stories about other unmarked graves in the wilderness area. Bud Lane, a local cowboy and packer, use to tell a story about an old Indian that was buried in the apple orchard at the Reavis Ranch. He had worked for the Cleman’s Cattle Company. According to Lane he was buried under his favorite apple tree sitting up. The old man had maintained and cared for the orchard for many years and had lived nearby the ranch. He was given food and other essentials in return for his help.

Another interesting story involves a prospector named James Kidd. He prospected the eastern edge of the Superstition Mountains for more thirty years. He worked the area around Pinto Creek, but never found what he was looking for. His partner Walter Beach said he and Kidd worked a claim in the mountains west of Globe but never staked it. Beach said Kidd never wanted anyone to know where he was working in the mountains. He was an extremely secretive individual. When his heart started failing him he wanted to be buried in mountains near his claim. Walter Beach told an old acquaintance of mine that James Kidd got his wish. If you ever discovered his burial site you would find his gold Elgin railroad watch. Beach said it was buried with him.

Several years after Kidd’s death, a fortune was discovered in his bank account. His bank account exceeded more than $500,000.00. The battle for this fortune between various groups lead to a book titled The Great Soul Trial. Kidd believed in ghosts and the hereafter. The group that could prove the existence of a spirit or the soul would receive his fortune.

Another interesting story about a burial site in the wilderness area is the alleged grave of Alfred Senner. There is little documentation that Senner actually existed, yet there is enough information about this man to believe he did indeed exist. A story is told about a burial site high up in Monument Canyon where Senner body supposedly came to a rest after plunging over a 2,000 foot ledge where he, his riding horse and pack animal went over the edge during a snow storm. Senner supposedly high-graded (stole) rich gold ore from the old Mammoth Mine and cached it somewhere on Superstition Mountain above Goldfield. The story was Senner fell while trying to retrieve his cache of high-grade gold ore from the top of Superstition Mountain. Is it fact or legend? Who knows for sure?

Buried in several different sites along the face of Superstition Mountain are the remains of Native Americans. Several residents in the Apache Junction area have found graves when they were excavated the foundations for the their homes near the base of the mountain. Some were very elaborate burials including several different kinds of artifacts ranging from turquoise jewelry to small ollas a (ceramic jars) filled with arrowheads.

Another interesting burial site lies in a very remote canyon in the heart of the Wilderness Area. Buried in this grave is man who wandered the mountain for five decades searching for a gold mine he believed existed. The story goes something like this. When he finally succumbed to pancreatic cancer he was deep in the mountain and begged his two friends to buried him rather than call out for a rescue crew. His friends knew how important it was to him for his remains to be left behind in the mountains. I have always doubted this story, but who knows for sure?

I am sure there is others buried within the wilderness area whereby no records or information exist about their burial sites. Especially during the period following the American Civil War when the first miners and ranchers entered this country in search of a new way of life. All my life I have heard stories about obscure burials within the wilderness of old prospectors who died, were cremated and interned somewhere in this vast wilderness; a practice that is technically illegal.

These prospectors and treasure hunters were true individualists and they were determined to have their way even in death.
Posted by Apache Junction Public Library at 5:54 PM