Eagle of the Superstition Mountain 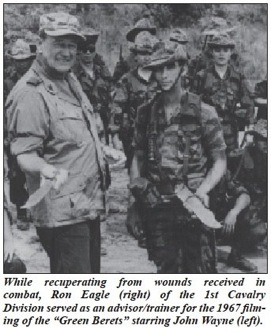 The stories of the Superstition Mountain and the Lost Dutchman Mine continue to conjure up tales of death, deception and greed. Yes, there are individuals who contribute to such stories. However, the majority of people who visit the Superstition Wilderness do it to enjoy the beauty and solitude of the region. There are those who search for gold and follow a dream, and some of these individuals are real American heroes. One such individual was Ronald A. Rousseau, better known as Ron Eagle de Andre II.

Born in Concord, New Hampshire, Ron Eagle arrived in the Apache Junction area in 1974. He had served as a member of the U.S. Army 1st Air Cavalry Division Medcap Unit in Vietnam and had been severely wounded. Ron wanted to forget the war in “Nam” and he immediately began to pursue the treasure legends of Superstition Mountain with a couple of his Vietnam buddies.

When I first met Ron Eagle he was exploring the area around Coffee Flat and Miner’s Needle in 1974. Clues and other information finally led him to the northwest end of Superstition Mountain by 1977. He established Camp Eagle on U.S. Forest Service land near the Lost Dutchman State Park. Ron and his friends searched, dreamed and thought about the weeks, months, and years that lay ahead. Ron organized ATLAREP Inc. a non-profit organization he called the Superstition Wilderness Research Foundation. The purpose of this organization was preserve all historical artifacts found for future generations of Americans to enjoy.

While conducting his research on antiquities and treasures in the Superstition Mountains, Ron also found time to be patriotic and support the role of veterans and service men throughout our state. He was involved with 187th ARCT (Airborne Regimental Combat Team) color guard with some of his friends. The unit has marched in dozens of parades since 1986. He has carried the plight of Vietnam veterans to all levels of government, which eventually lead to him becoming commander of the AmVets. He was actively involved in the fund raising for the Arizona Vietnam Memorial in Phoenix. He has worked diligently in many organizations to achieve equally for all veterans.

Ron is a very sincere, gregarious individual when it comes to the legends and stories of Superstition Mountain or the rights of Vietnam veterans. He served three tours of duty in Vietnam and received three Purple Hearts and numerous other decorations for his service to this country. While recuperating from wounds received in combat, he served as an advisor/ trainer for the filming of the “Green Berets” starring John Wayne. I recall sometime ago perusing a photograph of Ron standing next to John Wayne during the filming of this motion picture (see above). Ron helped train actors for the motion picture “Green Berets” at Fort Benning, Georgia, in 1967.

This story brings together the legend of the mountain and the life of a man filled with so much patriotism that we should be proud to know him. During the mid 1970’s Ron was known for his prospecting camps near Superstition Mountain where the American flag always flew high above his camp. Since I have known Ron, he has always advocated patriotism in some form or fashion whether it was popular or not. Ron Eagle has always flown his American Flag and proclaimed his love for the American way of life. I cannot judge how successful he has been with his advocacy for veterans, but I do know he has always been dedicated to veteran causes and he loves the stories and legends of Superstition Mountain.

Ron Eagle epitomizes those many men and women who are willing to sacrifice their lives for our freedom and safety. It is important we honor all veterans on Memorial Day and Armistice Day each year. Thank a veteran for all the rights you have in this wonderful country of ours. We must remember it takes all kinds of personalities to protect our rights and freedom from tyranny. God Bless our Veterans and America.
Posted by Apache Junction Public Library at 6:00 PM