White Water on the Salt River 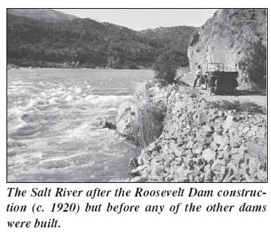 The passing of time slowly erodes one’s recollections of the past. Therefore much of our oral history is lost. Some of our history is lost among the dusty old newspaper files at the state archives. Several years ago I was perusing stories from the Phoenix Daily Herald and Tempe News from 1885-1895. I came across a very interesting article in one of these newspapers.

The Salt River had always be a challenge to Arizona pioneers. The search for fording sites along the river created small Arizona hamlets such as Marysville. The soldiers at Fort McDowell used the fording site at Marysville to pursue the Yavapais along the upper Salt River and into the Superstition Mountains.

The challenge to run this river was first answered in 1875, by two daring Arizona pioneers. This was just eleven years after the founding of Camp McDowell along the Verde River. These brave men’s names have been lost in the pages of Arizona History, however their heroic deed has not been forgotten. Ten years after their sojourn down the Salt River four other men accomplished this challenge.

William Burch and his three companions formed an expedition in June of 1885 to explore the Salt River from Tonto Creek to Phoenix. Burch’s companions also included John Meadows and Lew Robinson, They didn’t run the river for its recreational benefit, but to conduct a feasibility survey as to whether or not logs could be floated down the Salt River to Phoenix from the Sierra Anchas.

A Mesa City boat builder by the name Logan constructed Burch’s river-running cataract boat. The boat constructed by Logan was eighteen feet long and five feet wide. This well-designed boat survived the trip down the Salt River with little or no damage. The Phoenix Daily Herald headlined the accomplishment of William Burch and his three companions on June 3, 1885. Burch and his companions reported it was feasible to float logs down the river to Phoenix. The log transporting company on the river never became reality.

Burch’s run down the Salt River started at the Eddy’s Ranch above the mouth of Tonto Creek. The distance down the river was estimated to be 60 miles. The trip required four days. Burch and his party thought they were the first to make the trip, but later found out another group made the river run in 1875.

Today the lower Salt River from Stewart Mountain Dam (c. 1930) to Granite Reef Dam is one of the busiest rivers in the world for recreationist from late May until Labor Day. As we look at the lower Salt River today, it is difficult to visualize a raging river through narrow canyons filled with huge rapids.

These early river runners reported the narrow boxes of the Salt River as ideal sites for dam construction. These early reports and the information contained within them provided the ground work that eventually led to the construction of Roosevelt Dam, Horse Mesa Dam, Mormon Flat Dam and Stewart Mountain Dam.

These structures totally tamed the mighty Rio Salinas as it was know in those days.
Posted by Apache Junction Public Library at 3:40 PM