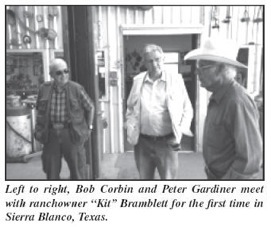 Dreams of finding a lost gold mine was in the minds of the “over-the-hill” prospecting gang from the “Land of Oz.” Please let me explain!

Peter Gardiner, 68, is a retired homicide detective and British Embassy Security Agent from England, Robert “Bob” K. Corbin, 80, a retired Arizona State Attorney General and, the third member of the gang, yours truly, age 71. Believe it or not we could all see the headlines as we drove from Apache Junction to West Texas. “Retired Attorney General of Arizona, Retired English Detective, Retired Educator and Cowboy Discover Rich West Texas Gold Mine.” Dreamers all we were as we drove across the barren and deserted desert land between Apache Junction and Van Horn, Texas.

This was Peter’s second trip to Apache Junction in search of gold. His first trip involved the Lost Dutchman State Park in 1981. He had pin-pointed a gold deposit in the area that was actually a vein associated with the old Mammoth Mine. The vein proved valueless in the end and Peter returned to England empty-handed. However, while here in Arizona for the first time, Peter made several trips into the Superstition Wilderness Area on horseback. This English detective was fascinated with the west and the many stories of lost gold mines. Peter was introduced to Bob Corbin and heard more interesting stories about the Lost Dutchman gold mine. Bob Corbin and I have spent close to twenty years roaming around the Superstition Wilderness Area on horseback looking for clues to the old Dutchman’s mine.

Interesting enough the Lost Dutchman mine brought the three of us together again some twenty-eight years later in the spring of 2009. Peter contacted me in January of that year about a lost gold ledge located in the Eagle Mountains of West Texas near the Rio Grande River and south of Sierra Blanco. The gold ledge was located on a Texas rancher’s land. It just happen the Texas rancher was also the county attorney of Hudspeth County, Texas. Peter called Mr. C. R. “Kit” Bramblett and introduced himself. He explained to Mr. Bramblett that he had located a rich gold ledge on his property and Mr. Bramblett agreed to allow Peter to visit his property and examine the site.

Peter drew up a legal agreement according to the laws of England, but Mr. Bramblett thought Peter should use the laws of the United States and Texas. Peter agreed and then asked him if he could bring two friends along. Those two friends Peter identified as Mr. Robert K. Corbin and Tom Kollenborn. “Kit,” as Mr. Bramblett liked to be called, said he had been riding this country on horseback for seventy years and couldn’t imagine missing such a gold ledge in this country or on his property. 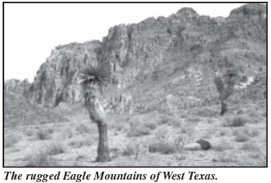 Mr. Bramblett’s statement did not deter Peter in any way. He was determined to search the top of Eagle Mountain for this rich gold vein he believed was there. When I first observed the area upon our arrival, the Eagle Mountains appeared to be marine limestone. We stopped along to the road to Kit’s ranch and the rock we found exposed was limestone and a lot of the debris along the road and in arroyos turned out to be limestone also. Kit said most of the mountain tops were formed of marine limestone with an occasional outcrop of basalt. Never the less Peter insisted we were going to climb this three thousand foot mountain to look on top.

Kit, Bob or I thought these were not good conditions for a gold prospect. After walking around and looking at the debris that had eroded down from these mountains there was little indication that this would be gold producing country. I was a real skeptic, as was Kit Bramblett. I believe Peter thought I had jumped ship. I was thinking all along, what were these three Superstition Mountain characters doing searching for gold in West Texas? You know that was a good question. From Apache Junction to Kit’s Ranch was 619 miles.

We continued our search based on an 1851 story of a railroad surveyor who went into these mountains southeast of Sierra Blanco and allegedly found a rich deposit of gold. Many of the locals thought he found his gold in the Eagle Mountains because of how rugged they were and inaccessible. These mountains were much like the Superstition Mountains of Arizona.

We continued our search for a couple of days and finally decided we were not properly prepared for such an undertaking. We were all over age seventy, except for Peter. As we departed West Texas and began our journey back to Apache Junction we realized how significant the trip really was. We made some wonderful friends in West Texas and heard a lot of wonderful stories of life along the Rio Grande River. The stories included cowboys, Texas Rangers, Native Americans and Mexican bandits. Yes, my friends we did find some real gold in West Texas in form of wonderful friendships.

We had all heard about Texas hospitality, but never realized how great it was until to met wonderful people like Kit and Jerry Bramblett of Sierra Blanco, Texas.
Posted by Apache Junction Public Library at 3:43 PM