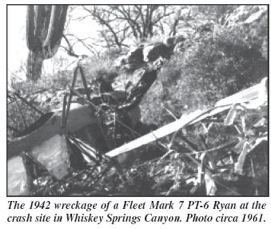 The Superstition Wilderness Area has yielded treasures other than gold, treasures such as archaeological sites, old mines and even vintage aircraft. The following is the story of one aircraft that went down in the wilderness some 67 years ago.

A Canadian pilot and an instructor took off from Falcon Field for a routine check flight on the morning of February 21, 1942. This routine flight turned out to be a miracle for the two Canadian military men when, high over the rugged Superstition Wilderness, the aircraft’s engine failed. With nothing but deep canyons and lofty mountain peaks below the pilot and student suddenly were confronted with a life and death crisis. If you were to pull out a 7.5 min. topographic quadrangle of the area where Whiskey Springs Canyon flows into La Barge Canyon you would find no available emergency landing sites of any kind.

I became involved with this story for the first time in the late fall of 1946. My father had heard about the airplane crashing in the Superstitions during the war and had decided to hike to the site. This was shortly after the end of the end of World War II when few people were interested in either the Superstitions or plane crashes.

William A. Barkley had told my dad exactly where the plane had crashed in Whiskey Springs Canyon. He told my dad the plane was in excellent condition and most of its instrumentation was still on board.

After hearing this information, my father and I drove out to the Quarter Circle U Ranch in Pinal County. We departed the ranch on the morning of November 15, 1948 and hiked up to Miner’s Needle Summit. We turned right, paralleling the ridge to the east. We then hiked up through another saddle and then down into the headwaters of Whiskey Springs Canyon.

As we came around a small bend in the canyon there, resting in the morning sun, was a Fleet Mark 7 PT-6 airplane in amazingly good condition. This particular aircraft was used as a primary trainer by the U.S. Army Air Corps and the Royal Canadian Air Force. The plane was a two-place tandem and all-fabric fuselage except for the cockpit area. It was powered with a five-cylinder radial, 125 horsepower Kinner engine.

There were only 15 of these aircraft constructed for the U.S. Army Corps during the war years 1940-1945 because the aircraft was dangerously under-powered and easy to stall. This particular aircraft was assembled in Ontario, Canada, and the information available on this aircraft indicates it was used for service by the Royal Canadian Air Force.

The Mark Fleet 7 PT-6 remained at its crash site until the spring of 1963. At which time it was packed out of the Superstitions piece by piece. The project was accomplished by a flying club in Tucson. The Tucson Aero-Club had originally planned to restore the aircraft to flying status once again. However, this proved to be too much of a financial burden for the club.

The club retained the aircraft for a year or so, then sold it to a local collector of vintage aircraft. In 1975 the plane was sold to another collector from the state of Washington. Recent information indicates the aircraft is once again flying.

I returned to the crash site in 1961 with an old friend named Joseph Roider. We spent the night camped at the old crash site, and the next morning we took numerous photographs of the plane and the area. I climbed to a ridge above the crash site and looked down. I could hardly keep from wondering what was on the minds of the pilots when they were searching for a place to set the airplane down. From a bird’s eye view, the only thing I could see were rocks, saguaros and deep canyons.

I’m sure the 2-man crew thought the end was near as the plane came crashing in for a landing. The plane impact on the top of a ridge and flipped, eventually coming to a rest on its wheels. The two pilots survived the impact. Faith and luck probably saved their lives. They walked out to the Quarter Circle U Ranch and once again returned to flying status. I returned to the site again in 1982 and found only a single tire from the airplane. Today it is difficult, if not impossible, to locate the exact site where the crash occurred in 1942. The miracle of that day is that two lives were spared.
Posted by Apache Junction Public Library at 3:42 PM