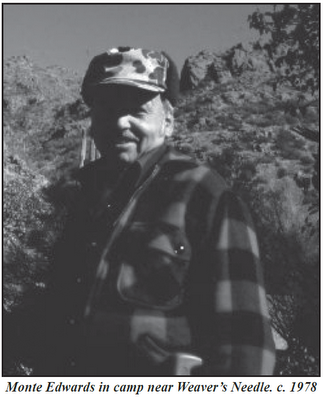 I have ridden the trails of the Superstition Wilderness Area for  more than 50 years and have been witness to a variety of unusual events. Sometime during the 1970s most of the livestock was removed from the wilderness lands in the Superstition Mountain region and the removal of livestock led to the brushing up of the trails. It wasn’t long before I started seeing trails that had been brushed out (cleared).

The trail I remember in particular was the old West Boulder Canyon Trail. I couldn’t imagine a sincere Dutch hunter doing such a thing. Brushing a trail would be like advertising exactly were one would be going in this rugged terrain. Someone had done an enormous amount of physical labor clearing this particular trail.

At the time I was convinced neither Baun nor Shade would have brushed out three miles of trail. It had to be someone who was far more ambitious then these two men and more physically adept.

Late in September of 1979 I was riding my horse “Crow” into West Boulder Canyon. I wanted to photograph the old stone corral in that canyon. As I rode along the trail I noticed it was brushed out quite well and easy to ride along without snagging cat claws or cactus. Someone had definitely cleared the trail and made riding much easier. Cattle going to and from water once kept the trails quite clear of brush and cactus. Since the cattle had been removed, the trails had become overgrown. This particular day was quite warm
and I was really surprised when I came upon a man cutting brush along the trail. He was wearing a yellow cap and red shirt. He was swinging a large military machete and cutting brush and cactus here
and there clearing the trail. I called out to him.

He was very friendly as I approached. Then I recognized the man to be Monte Edwards, an airline pilot, who was a part time Dutch hunter. He spent most of his spare time in the Superstition Mountains looking for the Lost Dutchman Mine.

Mr. Edwards was a command pilot for Delta Airlines. He flew international flights in the DC-1011 later in his career. At first I was amazed to see him out here in the mountains alone. He was totally self-sufficient. His backpack contained everything he needed. He told me his pack weighed 60 pounds. At the time Monte Edwards was in top physical shape. I soon learned he had been a major in the United States Marine Corps and flew F-86 Sabre Jets during the Korean PoliceAction in the early 1950’s.

Monte Edward hiked the trails of the Superstition Wilderness Area for more than thirty years. He spent a majority of his time photographing pictoglyphs and markings on rocks in the area. He had hundreds of photographs and precise GPS locations for all the markings he had found in the Superstition Wilderness Area. To this day nobody has duplicated his work. His work was a monumental task. He was always asking me about any markings or pictoglyphs within the Superstition Mountain area. I would give him some directions to a site he had never photographed. He would then go find it. He always surprised me with his tenacity to search out and find a marking or pictoglyph in the region.

One day Edwards and I were visiting and I asked him why he brushed the trails so much and worked so hard at it. He told me he sat for hours in a cockpit five days a week. He explained that he needed to get out and do some good hard manual labor to stay in shape. He told me cutting and clearing trail was good physical exercise for him. There was a logical explanation for the “Machete Man” after all.

I am certain his work will appear in some museum in the Southwest someday. His work was unique and special in annals of Southwest history.

Monte Edwards was born in Lewiston, Idaho on November 16, 1932 and attended Colorado Western College at Gunnison, Colorado. He searched the Superstition Mountain region from 1963 until 1989 and passed away on May 6, 1990.
Posted by Apache Junction Public Library at 5:00 PM