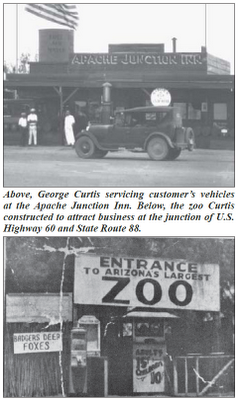 George Cleveland Curtis should be known as the founder of Apache Junction and his contemporary, Jack F. Anderson, as “The Father of “Apache Junction.”

Jack Anderson certainly speculated on the future growth of Apache Junction and would have succeeded if he had not passed away in his youth. It was Jack Anderson who dreamed Apache Junction would someday be a major community in the heartland of Arizona. However, it was Curtis who braved the uncertainty of success when he established a small business on a homestead some sixteen miles east of Mesa,
Arizona in 1923.

By late 1923 Curtis was well situated at the junction of State Route 88 and U.S. Highway 60-70. This was a time when cow trails and wagon tracks covered much of the Arizona desert. Cutis’ endeavor included pumping gasoline for the Union Oil Company, servicing automobiles, selling groceries, and lunches to the few customers that traveled the lonely desert roads. Curtis laid claim to 160 acres under the Homestead Act and local ranchers were quite apprehensive about his claims to the land he settled on.

When construction was approved on Mormon Flat Dam in late 1923, Curtis saw a slight boom in his business. This sudden prosperity provided the needed capital to expand his growing enterprise even more.

Curtis was a very clever entrepreneur who realized he had to draw the public to his business. This led to the construction of Arizona’s first licensed zoo. Curtis soon found problems in trying to gain title to his homestead land because of prior claim. He fought this case to the Supreme Court and finally
emerged the winner.

Curtis tangled with George U. Young about the naming of Apache Junction. Young had suggested the junction of SR 88 and U.S. Highway 60 be called Youngsberg Junction after the name of his mining interest at Youngsberg (Goldfield). Eventually the site was named Apache Junction from Curtis’ original suggestion.

Jack F. Anderson was an energetic man who visualized a future for Apache Junction. He recognized that this desert climate was well suited for tourism and retirees. By 1948 the first subdivisions of land were organized and lots sold. The future of Apache Junction looked very bright.

Always lingering in the shadows of the Superstitions was the legendary gold mine belonging to Jacob Waltz to attract people to the area. However, the attraction was not the legend, but the climate and magnificent scenery. It was the latter two that brought forth the multitudes who settled on the desert floor at the base of Superstition Mountain.

During the 1950s veterans were allowed to homestead parcels of land east of the junction of State Route 88 and U.S. Highway 60-70. This act converted a large section of public lands to private ownership permitting the eventual building of homes and an economic boom for Apache Junction. One of the earliest settlers of the area was Barney Barnard, well known for his tall tales about the Superstition Mountains.

The Lion Clubs was the leader of community affairs in those days. Anderson believed in the welfare of children and was instrumental in the organization of a Little League Baseball program in Apache Junction. His support of community projects earned him the respect of many people. His efforts helped create a modern community in the desert at the foot of Superstition Mountain.

Jack Anderson also wanted to support some kind of a community event through the Lion’s Club to attract people to the area. The Apache Junction Lion’s Club sponsored the first Burro Derby in February of 1958. The event was a big success.

On October 11, 1955, George Curtiss died. Just a year and  a half later on June 8, 1957, Jack Anderson died suddenly while vacationing in California. Both men were true pioneers in founding of Apache Junction. Both had gambled on the future of this land near the base of Superstition Mountain and had won.

Our community is a fitting monument to this kind of pioneering spirit. Sometimes we need to be reminded of our roots and how this community came about.
Posted by Apache Junction Public Library at 1:30 AM