The Legend of Jacob Waltz 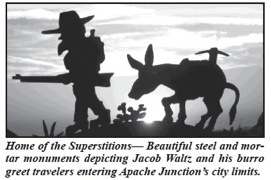 With Apache Junction’s Lost Dutchman Days celebration only a few weeks away, it’s most appropriate to re-tell the story of the man behind the legend.

Jacob Waltz unknowingly created one of the most popular legends of the American Southwest. Storytellers say he spun yarns and gave clues to his gold mine in the Superstition Mountains for two decades. These clues and stories attributed to Waltz continue to attract men and women from around the world to search for gold in these mountains.

The search for gold in the Superstitions is pure fantasy to most people. However, some believe this legendary gold mine is as real as the precious metal itself. Who was this man that left this lingering legacy of lost gold? The story of the Lost Dutchman’s mine remains the legacy of this old man.

Jacob Waltz was born near Oberschwandorf, Wurttenburg, Germany some time between 1808 and 1810. The precise date of his birth has not been documented with baptismal records. His childhood is quite obscure and few records remain about his early life in Germany. There is no information or documentation that indicates Jacob Waltz had any formal education. There is certainly no record that proves he was a graduated mining engineer as claimed by some writers. Helen Corbin published the manifest of the S.S. Obler in her book, The Bible on the Lost Dutchman Gold Mine and Jacob Waltz, Wolf Publishing Company, Prescott, Arizona, 2002. According to the document, on October 1,1839, Jacob Waltz sailed on the ship Obler from the Port of Bremen to America arriving at the Port of New Orleans on November 17, 1839. Waltz’s name appears 97th on the list and his age is given as 28. His hometown was Horb, Wurttenburg, Germany according to the ship’s manifest. The source of Helen Corbin’s information is said to be Kraig Roberts, the grand-son of Guidon Roberts. Guidon Roberts was at the bedside of Jacob Waltz just prior to his death in 1891.

Some researchers claim Waltz worked in the gold fields of Meadow Creek, North Carolina and Dohney, Georgia for awhile, but there are no records to support this claim. Jacob Waltz filed a letter of intent to become a citizen of the United States at the Adams County Courthouse in Natchez, Mississippi on November 12, 1848. This is one of the first actual documents Waltz’s name appears on in America.

It is believed Waltz traveled overland to California around 1850. He spent eleven years working in the gold fields of California. Waltz’s name appeared in some early California census records and he did file papers to become a citizen of the United States in the Los Angeles County Court House. He became a naturalized citizen of the United States on July 19, 1861, thirty years prior to his death in Phoenix. The events surrounding Waltz’s life during his twenty-seven years in Arizona Territory is what created his legacy.

Waltz traveled to Arizona Territory with the Peeples- Weaver Party in the May‘ of 1863. The Peeples Party discovered gold in the Bradshaw Mountains along Lynx Creek. While these early prospectors were busy staking out claims Waltz and three other men staked out a claim called the Gross Claim in the Walnut Mining District on September 21, 1863. Waltz would stake out two more claims in the Bradshaws before eventually moving down to Phoenix in 1868. Waltz gained much of his knowledge about prospecting and mining while working in California.

Waltz came to the Bradshaws as an experienced prospector and miner. While in the Bradshaws, he signed a petition to Territorial Governor Goodwin to raise a militia to stop the predatory raids of the local Native Americans. It is highly unlikely Waltz spent anytime around Wickenburg. He did settle on a homestead on the north bank of the Salt River, filing papers on a homestead in March 1868. Waltz farmed a little and raised a few chickens. He also prospected the surrounding mountains until about 1886. Some believe, if Waltz had a rich mine, he found it between 1868-1886.

There are so many stories about Waltz and his mine in the Superstition Mountains it is impossible to separate the truth from fiction. The old prospector had few friends, but Julia Thomas and Rhinehart Petrasch appear to be a couple of Waltz’s friends according to information that is available today. Julia Thomas traveled into the Superstition Mountains looking for Waltz’s mine in August of 1892, about ten months after Waltz’s death. She found nothing. It is believed by many Arizona historians that Thomas drew and sold maps to Waltz’s mine to help recoup her losses after selling her business and going on a wild goose chase in the Superstition Mountains looking for his mine.

If Waltz indeed had a mine, there are those who are totally convinced it was the old Bull Dog some two miles west of Superstition Mountain. The Bull Dog had an eighteen inch vein, a significant clue in the story of the Lost Dutchman Mine.

Did Waltz have a rich gold mine east of Phoenix? The gold Waltz had at the time of his death came from somewhere. It could have come from California, the Bradshaw Mountains, the Goldfield area or possibly the Superstition Mountains. The rich gold ore he has in a candle box under his bed helped create the legacy of the Lost Dutchman Mine.
Posted by Apache Junction Public Library at 5:43 PM