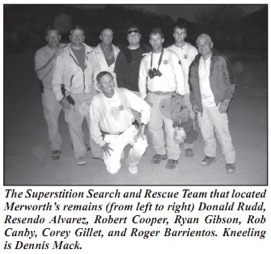 Gold and treasure have attracted men and women to the Superstition Mountain region for more than a century. Ironically, their quest for lost treasure or gold has often turned tragic. Searching for treasure in the summer months with little or no experience in the region can result in deadly consequences. The vision of riches has led many to their final resting place among the rocks and cacti of this unforgiving land known as the Superstition Wilderness Area.
In July, 2010, three men from Utah embarked upon a treasure-hunting quest that ended their lives tragically. Curtis Glenn Merworth, Malcolm Jerome Meeks and Adrean Charles headed for an unknown destination deep in the Superstition Wilderness Area. In the summer months the ground surface temperatures can heat up to 180*F. The darker the ground the hotter the temperatures can be. The air temperature was above 110*F and water was scare within the vastness of this mountain wilderness. A blind vision of golden riches drew these men into this internal hell like a magnet. The men were aware of the dangers apparently because they carried umbrellas to protect themselves from the burning rays of the sun. However, they failed to carry enough water to survive the stifling heat. The victims parked their car at First Water Trailhead around Tuesday, July 6, 2010. 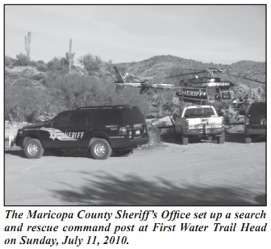 Soon after the men arrived they were reported missing. The Maricopa County Sheriff’s Office (MCSO) set up a search and rescue command post at First Water Trail Head on Sunday, July 11, 2010. The sheriff’s office had a helicopter transporting search crews to different points within the wilderness to conduct searches. The helicopter crew searched the area by air looking for any visible clues. Approximately a hundred people were searching the area on foot, horseback and by air.  All of this searching did not produce a single clue as to what happened to these men or where they had gone. The MCSO Search & Rescue Command Post was taken down on Sunday July 18, 2010.  Members of the MCSO, Pinal County Sheriff’s Office (PCSO), Superstition Search & Rescue, and other volunteers continued searching for the three missing men through December 2010. As of January 1, 2011, not one clue had been found associated with these three missing men. It was as if they had vanished from the face of the Earth.
Searching for hikers is one thing, but searching for treasure hunters is something entirely different. Hikers and horseman generally remain on wilderness system trails. However, treasure hunters (Dutch hunters) wander in all directions over the mountain’s vastness looking for clues to a lost gold cache. A clue might be a pictoglyph, a certain shaped rock, a cactus or maybe an old claim marker. These treasure hunters are usually far removed from system trails and often in extremely rugged country. I’m sure the MCSO and other search groups did everything possible to locate these missing men. These officers are dedicated men and women who are here to protect and serve us.
Once the officials scaled back their operations the volunteer groups began their search for the three missing men. I followed the activities of the Superstition Search & Rescue Teams during their searches. They are a very dedicated and highly trained group of young men and women who devote hours of volunteer time to help others. This team is a member of CERTS, a Community Emergency Response Team working with the Apache Junction Police Department and trained by the State of Arizona. We cannot fault anyone for not finding these men sooner because in the end they were far off any beaten path. They were in an area it was highly unlikely anyone would search.
Richard “Rick” Gwynn, author and prospector, was hiking in the Superstition Wilderness Area on Wednesday, January 5, 2011 trying to piece together clues about the lost gold of these mountains. Gwynn was about two miles east of First Water Trailhead when he made a gruesome discovery on the NNE slope of Yellow Peak. He found two skeletons fully dressed lying on loose steeply sloping black-basaltic rock talus about 150 feet wide and 1000 feet long. Nearby he found two umbrellas they had been using for shade. Near the bodies was a battery-powered lamp. Rick said it appeared the men had died of natural causes. They had no water. Summer temperature on the black basaltic rock probably reached an easy 180*F.  No human or animal would have lasted very long lying or crawling across that black rock.
Again the Maricopa County Sheriff’s Office helicopter and search teams began a search for the third victim. You must bear in mind this is extremely rough terrain, and again the search had no success.
After the MCSO was done searching, the Superstition Search and Rescue Team (SSAR) returned to the field. They began a search on Thursday, January 13, 2011, searching northward toward Black Mesa near the southeastern part of the mesa. About ¾ miles north of the first site that SSAR team found what appeared to be debris field that included a bone. They had no idea it was human, but thought it was fresh.
The team returned to area on Saturday, January 15, 2011 and found skeletal remains. Search Commander Robert Cooper immediately notified MCSO and a helicopter rescue team was called out under the direction of Deputies David Bremeton and Jesse Robinson. They supervised the removal of the third victim’s remains from the wilderness area.
This discovery and removal of the third and last body closed another sad chapter in the history of these mountains and the search for missing utah prospectors. The failure of these men to understand the dangers of the mountains in the summer months cost them their lives.
Finally the three Utah gold hunters had been found— ending one of the most difficult searches in Superstition Wilderness Area history. Their vision of lost gold had been a fatal attraction.
Posted by Apache Junction Public Library at 5:46 PM