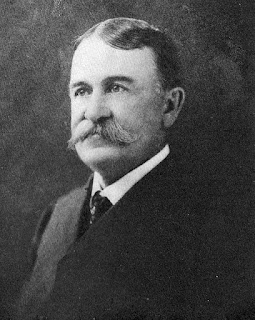 William M. Breakenridge was born on Christmas Day, 1846, in Watertown, Wisconsin. He traveled west in 1861 to the Pike’s Peak mining region. This was his immediate goal. He worked in that mining district until 1864. He then joined Company B, Third Colorado Cavalry for service in the Civil War.  He served at the Battle of Sand Creek and other skirmishes. It was around 1876 he headed for Arizona Territory.

William M. Breakenridge joined the Cochise Sheriff’s Office in 1880 under Sheriff John Behan. Breakenridge gained fame enforcing the law in Tombstone. He was appointed Deputy United States Marshal and held that position from 1880-1889. The commission allowed him the authority that he lacked as a deputy for Cochise County to enforce county and United States laws. According to several accounts many an outlaw’s dust lies in Boot Hill Cemetery because of the leadership of “Billy” Breakenridge.

According to James H. McClintock, Arizona historian, William “Billy” M. Breakenridge was an efficient peace officer, but not a killer. He never used a gun except as a last resort, and his courage was so well known that few outlaws challenged him to shoot. There is much controversy associated with Cochise County Sheriff Behan and the Tombstone Town Marshal’s office.  This was primarily the story about the Earps, Clantons and others at the O.K. Corral.

Several other early Arizona historians declared that Breakenridge was one of the most courteous and modest peace officers associated with the bloody days on Allen Street in Tombstone. Historians also said that, Billy Breakenridge was not a murderer, and he only enforced the laws of Cochise County and the United States.

After Tombstone, Billy Breakenridge accepted the position as surveyor for Maricopa County around 1888. He then made an exhaustive survey of potential dam sites along the Salt River. James McClintock, William J. Murphy and John R. Norton, a party from Phoenix, planned to examine the sites Breakenridge recommended.

The trip up the Salt River in July 1889 was made on horseback, and it required a week to reach Box Canyon, the present site of Roosevelt Dam. While the party traveled up the Salt River, James McClintock said that Billy Breakenridge pointed out that Mormon Flat and Horse Mesa dam sites did not offer much promise for a major storage and flood control dam. They would easily serve as secondary sites for later projects. Breakenridge insisted the only site that held real promise, was near the confluence of Tonto Creek and the Salt River in Box Canyon. He held to his recommendations with such tenacity, the federal government finally accepted his site selection. Actual construction on the dam was started on September 6, 1906.

Arizona pioneer William “Billy” M. Breakenridge was the first advocate for the Tonto Creek (Roosevelt Dam) site. His tenacity was the influence that located Roosevelt Dam where it stands today. He was one of the most famous peace officers of Tombstone’s rip-roaring days. According to McClintock, when the “smoke” of the original Helldorado Days cleared, the name of Billy Breakenridge stood out as the hero of Arizona’s most turbulent mining camp.

Colonel William “Billy” M. Breakenridge died in Tucson, AZ on January 31, 1931, at the age of eighty-four. He had made an enormous impact on Arizona history. It is also very interesting to learn, Billy Breakenridge, a town tamer from Tombstone’s rip-roaring days would be so involved with the future of the Salt River Valley.
Posted by Apache Junction Public Library at 12:00 AM