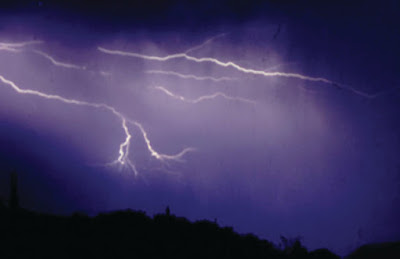 There are basically two types of storms that occur in our area. The first storm-type we experience brings the central mountain area of Arizona its winter rains. These winter storms result from the general cyclonic patterns that move across the United States every ten days or so during the winter months. These storms originate in the Aluetian Low in the Gulf of Alaska and can dump enormous amounts of precipitation on Arizona below the Mogollon Rim if their course is altered by the jet stream.

The storms will generally last four or five days with intermittent rainfall. This type of weather can be identified with the solid unbroken overcast resulting from Stratus clouds. These are what we call our winter storms and they are usually not violent in nature.

The second storm type is known as the Monsoons. These storms bring massive thunderstorms with heavy showers, lightning and sometime devastating winds called “microbursts.” During the summer months most of the storms over central Arizona and the eastern portion of the Superstition Mountain Wilderness result from warm moist air flowing in from the Gulf of Mexico and the Sea of Cortez. This air moves across Texas, New Mexico and Mexico.  Mountains force the moist warm air upward forming clouds. These clouds release their moisture as they rise and this is known as orographic lift.

The massive anvil-shaped thunderhead clouds that form over Superstition Mountain from July to September normally combine both from orographic lift and convectional activity.  The convectional storm clouds result from the rapidly rising and expanding of warm moist air and rapidly falling cold moist air. Uneven heating of the earth’s surface causes convectional activity in the atmosphere. This uneven heating of the earth’s surface is caused by the open cloud pattern in the atmosphere.

Lightning can be caused by the attraction of unlike electrical charges within a thunderhead. The rapid movement of ice and water molecules, going up then down in a thunderhead cell, creates friction that results in an enormous amount of static electricity being produced. A single lightning discharge can produce about 30 million volts at 125,000 amperes. A discharge can occur in less than 1/10 of a second. The results of a lightning strike can be horrific.

The rapid rising and falling of warm and cold moist air also creates violent bursts of energy. This type of activity results in microbursts. These microbursts can develop winds, momentarily, up to 200 mph. As the clouds build and combine they form massive anvil-shaped thunderheads called cumulonimbus clouds. These clouds are massive static electric generators dispersing lightning and creating turbulent winds. These summer thunderstorms are extremely violent and can be very dangerous.

Most Arizona monsoon storms are associated with two other dangerous factors. These factors are flash floods and dust. A Thunderstorm can dump three to five inches of rain over a small area in an hour and create a massive flashflood. A flashflood near Payson in the 1970’s claimed twenty-two campers along Christopher Creek. Many years ago I witnessed a four-foot wall of water that roared down Hewitt Canyon claiming a couple trucks, horse trailers and a couple animals. These flashfloods result from heavy isolated downpours of rain in the mountains. There is often very little rain at the site of a flashflood.

Huge dust clouds are often associated with Monsoon storms in the desert. Local weather reporters are often referring to Monsoon generated dust storms as Haboob. Egyptian dust storms that blow in from the Sahara or Sinai Deserts in North Africa are called Haboobs.

Dust storms are extremely dangerous to automotive traffic along our state’s highways and freeways. Extreme caution should be used during these storms. It is recommended during these storms to pull as far off the highway as possible and turn your lights off.  While waiting for the dust storm to blow over don’t rest your foot on the brake pedal.  Your taillights or brake lights might attract other drivers in the storm.

It is not difficult to see why the early Native Americans held Superstition Mountain in such awe. If you have ever witnessed a violent electrical storm over the mountain you can see why.  We can partially explain the phenomena today with modern science, but the early Native Americans could only look to their Gods for an explanation.  The storms were certainly caused by their “Thunder God” with all his might and fury. We, as late arrivals, should respect the awesome power of the “Thunder God.”
Posted by Apache Junction Public Library at 5:00 AM