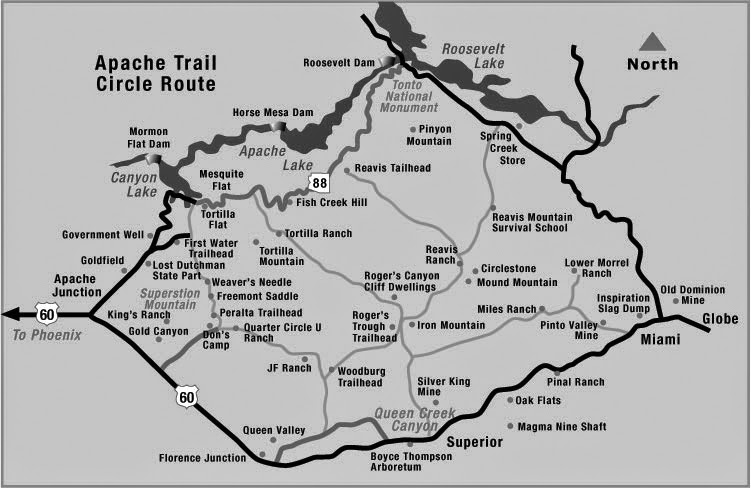 Since 1906, tourists have traveled the Apache Trail and marveled at the spectacular beauty along the way. The original Apache Trail began at a Mesa railhead and terminated sixty-two miles away at the Tonto (Roosevelt) Dam site on the Salt River.

After the construction of the dam the road served as a maintenance road. There were several change stations along the road used by teamsters.  These stations included Desert Wells, Weeks Station, Hall’s Station, Government Well, Mormon Flat, Tortilla Flat, Fish Creek Lodge and Snell’s Station.

The State of Arizona, under the leadership of Governor George P. Hunt, decided in 1919 to build a new transportation link between the cities of Phoenix and Globe.  Hunt considered the Apache Trail a very treacherous route for commerce.

The Apache Trail was narrow, rough and was often closed due to flooding and landslides.  Governor Hunt wanted to open the Globe-Miami copper industry to the Phoenix market.

The completion of the Phoenix-Globe Highway through Superior in May of 1922, opened commercial trade between the developing Salt River Valley and the copper rich central Arizona mountains.  This new highway completed the famous “Circle Route” that allowed drivers of automobiles to circumnavigate the entire Superstition Mountain region, a road-free region of some three to five hundred square miles.

If you want to take a trip over the famous “Circle Route” today, start in Apache Junction at the old “Dutchman’s Monument.” Drive northeast along State Route 88 (Apache Trail) about 4.1 miles and on the right side of the road you will find a stone entrance marker constructed on masonry rock from Roosevelt Dam. This 12.9-acre site is the home of the Superstition Mountain Museum.

As you continue up the Apache Trail the Bluebird Mine and Curio Shop is on the right side of the roadway.  This curio shop and pop stand has been operated continually since 1948, when “Red” Monigan first opened it.  Both the Bluebird and Goldfield are located in the Superstition Mining District.  A hundred years ago this was a booming gold mining district on the desert 23 miles east of Mesa, Arizona. The Mammoth Mine and Mill produced about three million dollars in gold bullion over a four-year period 1893-1897

Shortly after leaving Lost Dutchman State Park you will enter Tonto National Forest.  This national forest encompasses more than 3,000,000 acres of public multiuse land.  As you travel along the Apache Trail in the national forest you will notice a complete absence of billboards and advertising signs.  No commercial signing is permitted along the historic Apache Trail for the next forty miles.  The Apache Trail was designated Arizona’s first historic highway in 1988.

Some two and a half miles down the road from the Lost Dutchman State Park is the site of Government Well. This site was an important stage stop in the early days (1903-1917) for teamsters and their animals while traveling the Mesa-Roosevelt Road (Apache Trail).

The first automobile to travel the Apache Trail was on August 25, 1905. This car was a 1905 Knox built in Springfield, Mass. The car could carry seven passengers and had a twenty horsepower gasoline engine for power.  The automobile was used to carry passengers from Government Wells to Mesa, a distance of twenty-three miles. Holdren Brothers Stage Line was the first business to use motorized vehicles on the Apache Trail.

The drive from Government Wells to Canyon Lake is ten miles over a good asphalt road today. The volcanic rock formations along this portion of the route are spectacular. Most of the rocks are either ash or basalt in origin and were formed during the Tertiary Period of geologic time some 15-29 million years ago.  This is how most of the rocks in the western portion of the Superstition Wilderness Area were formed.
Posted by Apache Junction Public Library at 7:00 AM