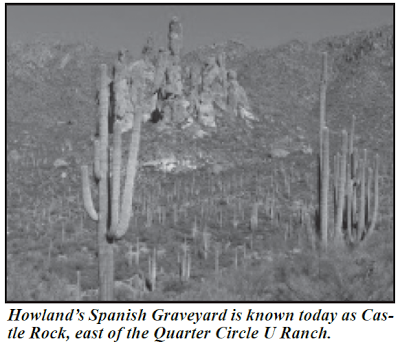 Raymond and Elizabeth Howland arrived on the Arizona scene shortly after World War I from their hometown of Detroit, Mich. Howland was an excellent automotive painter and soon set up shop in Phoenix in 1917. Ray and Liz had another reason for coming to Arizona, and that was to search for hidden Spanish treasure.

Shortly after Dr. Robert A. Aiton’s promotion of the Lost Dutchman Mine Corp. near Tortilla Flat in 1920, Ray and Liz Howland became very interested in the Superstition Mountains and Spanish treasure. Howland began roaming the Superstition Mountains early in the 1920s looking for clues to Spanish mining in the area. Around the middle of 1925, Howland claimed he had found several Spanish and Mexican artifacts in the Superstition Mountains. These artifacts ranged from spur rowels to ancient drilling steel. Most historian and old timers didn’t express much interest in Howland’s discoveries, but on June 20, 1927, the Mesa Journal-Tribune reported Howland claimed he found gold float assaying at $15,000 per ton. In this same article Howland was quoted as saying he “was close to discovering the Lost Dutchman Mine.”

The Mesa Journal-Tribune on July 28, 1927, reported Howland finding ancient Spanish corrals or dwellings deep in the Superstition Mountains. The article also reported Liz Howland helping her husband search for the Lost Dutchman Mine. Liz always verified what Ray Howland said. By mid-1927 Howland was playing a major role in the Lost Dutchman Mine scenario. You could say Ernest Douglas, a distinguished author of the period, gave Ray and Liz Howland their feeble credibility with a detailed story he wrote for the Los Angeles Times. In the article Douglas detailed the Howland search for the Peralta Mines and their claim the Dutchman’s Mine was one of these mines.

The Howlands called the mine the “La Mina de Sombrero” because it was alleged to have been near a hatshaped peak known as Picacho Aguila, Statue Mountain or Needle Rock. According to Howland, the rich ore from the mine was worked by 400 miners. The ore was then hauled down to the Rio Salinas and crushed in arrastres. When the Apaches finally attacked the Mexican miners, leather sacks of rich gold ore were hidden throughout the mountains, forming numerous caches. Howland believed Waltz found one of these rich Spanish caches. Ray Howland offered several rusty Mexican tools, spur rowels and drill steel as evidence to Spanish occupancy of the Superstition Mountains. His proof lacked provenience.

Howland became so involved with the Superstition Mountains he neglected his business. Al Henderson came over from California and took over the operation of Ray C. Howland’s Mesa Auto Painting and Duco Service Station on Feb. 13, 1928. Howland had moved his operation to Mesa in 1925. With Henderson in charge of his business, Howland returned to the Superstition Mountains.

By mid-August 1928, Howland had become known nationally because of Ernest Douglas’ articles. Howland’s fan mail increased at an unbelievable rate due to several magazine articles written about him and his search for the Lost Dutchman Mine. All of this publicity was in the pre-Adolph Ruth days. In October of 1928, the Fiction Writers of America held a convention in Mesa and they became very interested in stories about the Lost Dutchman Mine.

After selling his Mesa business, Howland and his wife returned to their cabin on the south side of Superstition Mountain. Howland made a claim in the early 1930s that he had found Spanish armor near a rock mass called the Spanish Graveyard east of the Quarter Circle U Ranch in Pinal County. Creditable authorities could never verify the Spanish crossbow dart and armor found by Howland.

Ray and Liz Howland continued their search for the Lost Dutchman Mine through out the 1930’s. Howland helped search for Adolph Ruth when he disappeared in the late spring of 1931. The Howlands created a fictitious foundation for an incredible story about lost gold in the Superstition Mountains. Landmark names such as Skeleton Ridge and the Spanish Graveyard on cryptic maps can be accredited to the Howlands. Today, Howland’s Spanish Graveyard is known as Castle Rock or Cathedral Rock. Ray and Liz Howland certainly left an impact on the mythology of this mountain wilderness. Years after Ray Howland’s death it was reported he purchased the Spanish artifacts he claimed to have found in the Superstition Mountain in New Mexico.

Howland’s fascination for the mountains turned into dreams and then just pure fiction and imagination. Yes, the Howlands did leave a legacy of myths that is certainly a part of the history of the Superstition Wilderness Area.
Posted by Apache Junction Public Library at 5:30 AM