FAQ About the Superstitions 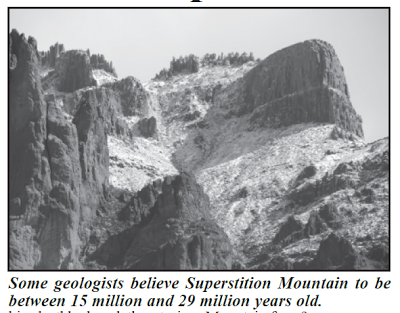 I taught a class about the history, geology, fauna, flora and legends of the Superstition Wilderness Area for more than twenty-five years in Apache Junction. These are the twenty most-commonly asked questions about the area.

2. Is there a Dutchman’s Lost Gold Mine?
Most Arizona historians believe there is little evidence to suggest the existence of a rich gold mine in the Superstition Wilderness Area. One can never forget the old adage, “Gold is where you find it.” Hundreds have searched for the old Dutchman’s mine over the past century and it still remains lost. Most geologists will tell you there is no gold in the Superstition Wilderness Area.

3. Who was the Dutchman?
Jacob Waltz indeed existed and prospected the mountains of Arizona from 1863-1891. According to early pioneers of Mesa and Tempe, Waltz made several trips into the Superstition Mountains. He was born in Germany in 1810 and died in Phoenix, Arizona Territory, October 25, 1891. Waltz had gold claims in Yavapai County and worked gold claims in California. He also homesteaded 160 acres of land along the north bank of the Salt River in Phoenix. Much of the legend about this old German immigrant resulted from the gold ore cache found beneath his death bed and the stories written by Pierpont Constable Bicknell as told to him by Julia Thomas, prior to the turn of the century.

4. How do I find Peralta Trailhead?
Drive southeast from Apache Junction on Highway 60 toward Florence Junction. Peralta Road is approximately 2.4  miles east of King’s Ranch Road. Turn east on Peralta Road and drive 8 miles to the Peralta Trailhead; an unimproved dirt road. A hike of Peralta Trail provides a spectacular view of Weaver’s Needle. This is a very strenuous 1.75 mile hike. Remember, this is a wilderness hike.

5. How do I find First Water Trailhead?
Drive northeast of Apache Junction on State Route 88 (Apache Trail) 4.9 miles. Turn right onto First Water Road. This road is dirt and can be a very rough 2.5 miles to the trail head.

6. Where is the Lost Dutchman State Park?
The Lost Dutchman State Park is located 4.7 miles northeast of Apache Junction, Arizona on State Route 88 (Apache Trail). The entrance to the park is on the right hand side of the road traveling northeast from Apache Junction. The various day-use and campsites have spectacular views of the northwestern façade of Superstition Mountain. The park now has overnight hookups for water and electricity.

10. Are there any roads into the Superstition Wilderness?
Roads are prohibited in a national wilderness area by law. Today, only one road actually penetrates the wilderness. This road is the Tortilla Ranch access corridor. The forest service plans on withdrawing this access corridor sometime in the future.

11. Are there any working gold mines in the Superstitions?
There are no working (profitable) gold mines operating within the boundaries of the Superstition Wilderness Area. The only gold mines that ever existed in the immediate area were the mines associated with the Superstition Mining District such as the  Mammoth, Bull Dog, and Black Queen, just west of Superstition Mountain proper. Visit the Goldfield Ghost Town to see the nostalgic remains of the old mining equipment and hear past stories about mining in the area.

12. What is a wilderness area?
A wilderness is a piece of public land set aside in its natural state and preserved for future generations to see and experience. The Superstition Wilderness Area encompasses some 159,780 acres of land in the Tonto National Forest.

13. Where can I see Weaver’s Needle from the highway?
Weaver’s Needle can be seen from both State Route 88 (Apache Trail) and U.S. Highway 60, approximately 7 miles northeast of Apache Junction at a new vista point. This is the best view of the “needle” from a paved highway.

15. What agency regulates the Superstition Wilderness Area?
The Tonto National Forest Ranger District under the supervision of the United States Department of Agriculture.

16. What is the easiest way to see the Superstition Wilderness?
The quickest and easiest way to see the Superstition Wilderness is by helicopter, but this method can be very expensive. The cheapest method is hiking the enormous trail system of the wilderness. To use the trail system you must be prepared to do a lot of hiking or horseback riding. The best time of the year to hike the wilderness is between November and April.