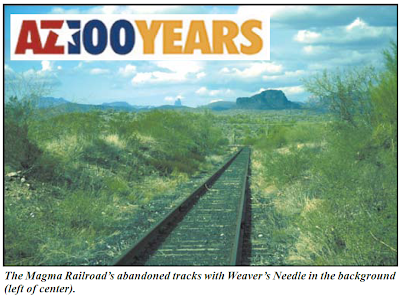 Arizona will be celebrating its centennial on February 14, 2012. The 48th Annual Lost Dutchman Days, Feb. 24-26, will honor the statewide celebration of Arizona’s 100th birthday by featuring a President  Theodore Roosevelt re-enactor as the Grand Marshall for the annual Lost Dutchman Days Parade (Feb. 25). After the parade he will drive to locations on the historic Apache Trail to speak about the building of the road to carry materials for the construction of the Roosevelt Dam.

This is the third in a special centennial series about Arizona by Tom Kollenborn.

Arizona’s transportation began on foot, then horseback, then by wagon, then the rail-roads, and finally a network of highways that crisscrossed the state. The history of the now abandoned Magma Railroad line shares Arizona’s rich transportation history.

Construction began on this short line two years after statehood in February of 1912.

Today, the abandoned Arizona Magma Railroad lies along the southern limits of the Superstition Wilderness Area. When this railroad was first constructed its purpose was to haul copper concentrates to the smelter in Hayden, Arizona. The development and construction of the railroad was an interesting part of early Arizona history.

The hauling of copper concentrates by team and wagon from Superior to Webster on the Southern Pacific railroad, some thirty-two miles away, was a costly undertaking for the Magma Company. The transportation of these concentrates required 20-32 mules harnessed to three ore wagons to accomplish the task. This method cost the company ten dollars per ton.

Two years after statehood the Magma Company in Superior was studying several alternative methods to reduce the cost of transporting copper concentrates to their smelter in Hayden. Hayden was located near the confluence of the Gila and San Pedro Rivers in Gila County. 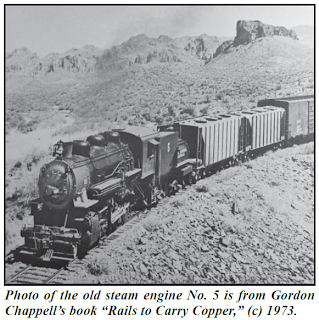 A variety of plans were suggested to reduce the cost, including the use of newly developed gasoline engine trucks. The idea had merit, but was shelved because trucks were not dependable at the time. Another  suggestion was the construction of an aerial tram between Miami and Superior, but his method was soon dropped for the lack of support. The primary objection was costly maintenance.

It was a young Pennsylvanian engineer named Edward G. Dentzer who convinced Magma Copper a railroad would be the most economic way to solve their transportation problem.

There were many obstacles in the beginning before any actual construction could begin on the railroad. First, the company had to decide on a narrow or standard gauge. Then came the problem of deciding whether to use gasoline, diesel or steam engines to work the short line. Even the size of rail to be used was heavily debated. The actual cost of construction was the ultimately deciding factor on just how the railroad would be built. The final decision was to use steam for power, and the steam engines operated on the line until 1971.

Dentzer completed a detailed survey, a mile by mile inspection and cost estimate of the narrow gauge railroad by August 20, 1914. The cost per mile would run about $4,600. The cost soared to $7,700 per mile by the time Dentzer completed his survey through the Pinal Mountain foothills crossing many intermittent streams. The crossing of streams required bridges and expensive grading.

Dentzer estimated the total cost of the railroad would be $197,281 to grade and the placing of 30.19 miles of narrow gauge track. Dentzer’s estimates for the narrow guage track were $9,000 less than the cost to build 15 miles of standard gauge railroad across flat desert land.

The original survey of the Magma Line had been initiated in 1912, the year Arizona became a state. The Southern Pacific Railroad had long considered the construction of a short line before the Magma Company. Southern Pacific rejected the project because their officials considered the Magma not capable of producing sufficient quantities of copper concentrate to warrant such a trunk line.

The Magma Arizona Railroad Company was officially organized on October 10, 1914. A construction crew moved into Webster on November 27, and the Webster Siding Camp was completed by December 1. The prime contractor had completed some 17.5 miles of track from Webster to a point two miles south of Hewitt Station on Queen Creek by February 6, 1915.

The narrow gauge railroad was completed to the concentrator near Superior and the end of the line by April 29, 1915, just over five months from the start date.

Rolling stock was moving along the railroad to Webster by May 1, 1915. The concentrates were transferred to the Southern Pacific standard cars at Webster then hauled to the smelter at Hayden for processing.

There was one major wreck in the history of the narrow gauge, which occurred on July 25, 1918, near the Silver King Siding. The narrow gauge served the Magma Copper Company well, but by the 1920’s the line was obsolete and not capable of keeping up with the increasing demands of the expanding operations at the Magma Mine.

The Magma Railroad Company approved the construction of a new standard gauge railroad on April 20, 1922. The narrow gauge remained parallel to the standard gauge until the latter was completed. The old narrow gauge continued to carry mail, passengers and freight until April 1, 1923.

Most of the old narrow gauge road equipment and rolling stock had been sold or taken out of service by early October, 1924. The era of the modern steam engine had been ushered in on the Magma Railroad.

When diesel-powered engines arrived on the Magma Line, steam engines began to retire. The arrival of dieselpowered locomotives ended the era of steam on railroads in America. The Magma Arizona
Line was the last line to use steam in the United States for its revenue runs. 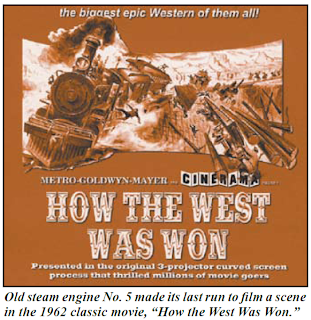 The first steam engine to retire was the “Little Mogul” Engine No. 6, on January 7, 1961. The first revenue run made by a diesel locomotive was on August 22, 1958. Engines No. 5 and No. 7 retired in 1967. Engine No. 5 was kept on standby status as diesel locomotives ended forever the era of steam on American short lines. As a standby, Engine No. 5 occasionally saw service. Old Engine No. 5 made its last run
performing for the cameras of Twentieth Century Fox on December 8th and 9th in 1971, in the filming of the movie classic “How the West Was Won.”

The Magma Arizona Railroad was the last industrial short-line railroad in the United States to use steam power.

The era of steam power had come to an end on American railroads, but its rich history still remains with us. Those old steam engines were a part of Arizona and Superstition Mountain nostalgia.
Posted by Apache Junction Public Library at 6:00 AM