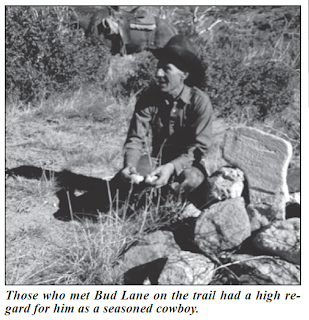 The following story is an appropriate story for this year’s “Day of the Cowboy” celebration  here in Apache Junction and Gold Canyon.

Richard A. “Bud” Lane touched many of our lives here in Apache Junction. His name was synonymous with cowboys and horses and his love for animals and the outdoors was shared with all those he knew.

Bud Lane was born on March 5, 1923, in Hanford, California. His life’s work was with horses and cattle. He served his country during World War II with honor. He was a navy diver and was on the USS Fanning near Pearl Harbor when it was bombed by the Japanese on December 7, 1941. He also served in the United States Air Force during the Korean Police Action. Bud worked as a cowboy on many of the ranches that dot the landscape of the American Southwest. He also was a part of the rodeo circuit for several years. His saddle bronc riding received a wide range of recognition and denoted the type of man he was.

Bud was an honest and proud man. His pride prevented him from accepting charity at anytime form others. He was so stubborn at times it was difficult for some to understand him, but those of us who really knew Bud understood why.

He knew who he was, what he was, and he wanted nothing else but to be a cowboy. He wanted to improve his place in life, but it had to be in the outdoors and with a horse. Bud Lane was born a hundred years too late. He dreamed of owning a couple of acres where he could have a horse and dog. Bud’s willingness to help others when he was down and out revealed the true character of this man. This desire to help others earned him a lot of respect in Apache Junction. A call for help to aid a person, injured horse, dog or other animal would always bring Bud on the run.

I will never forget the time my dog, Duke, was severely lacerated on his leg by a large piece of glass. I called Bud and he responded immediately to assist me with my injured dog. Within minutes he had stopped the bleeding and was stitching up the gaping wound on Duke’s leg. Duke walked a couple thousand miles in the Superstition Wilderness after that day attesting to Bud’s skill in doctoring animals.

Those who knew Bud respected and loved him despite his faults. There will be many “Bud Lane” stories that will emerge in the years ahead. These stories will be the legacy of a cowboy who never changed his way of in life to suit progress. Bud always tried to maintain a low profile. Stories about him and Superstition Mountain evolved from those who knew Bud best.

There were few people who knew the Superstition Wilderness as well as Bud Lane. Geographic place names such as Frankfurter Flats, Lane’s Short Cut Trail and many other names will be part of his legacy in this mountain country. Bud packed prospectors for Ron Feldman’s O.K. Corral, Crader’s Superstition Mountain Pack Outfit, and was half owner of the Peralta Stables with Everett “Arkie” Johnston. Those who met Bud on the trail had a high regard for him as a seasoned cowboy. I sometimes believe the song “My Heroes Have Always Been Cowboys” was written about and for Bud Lane.

Bud Lane touched the lives  of many of my students at the Apache Junction Jr. High School over the years. He and I sponsored numerous horseback trips into the Superstition Wilderness for the students of my classes. Bud and I guided these school trips for more than fifteen years together. On one trip we had sixty students and ten adult sponsors. Bud always said the children were his best “dudes” because they
took his advice about safety around the horses and also sought his knowledge about horses. I believe these were some of the happiest moments in this old cowboy’s life. Bud was very gruff toward adult customers, but his demeanor changed completely around children.

Bud Lane also taught classes on horse shoeing for Central Arizona College. He never dreamed he could get such a job. I talked to the dean of the college and he thought it was a great idea. Bud soon started teaching classes on Saturday at the old Quarter Circle U Ranch. These classes gave purpose to an old cowboy’s life. It was in these classes where he shared with his students the life he loved so much.

Richard Alexander “Bud” Lane was a proud man. He had his ups and down with life, but most important of all his integrity stood far above any of his faults. He was not a self-serving man nor was he self-centered. He was a man of his word and definitely a spirit of the Old West in Apache Junction. He was the cowboy in all us that we loved so much. Our friend Bud Lane passed away on Monday, June 1, 1987, at the Tucson Veteran’s Hospital in Tucson, Arizona.
Posted by Apache Junction Public Library at 1:46 PM