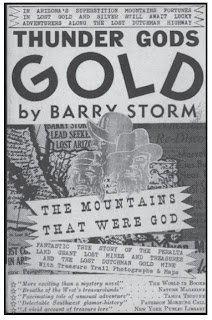 Barry Storm was born John Griffith Climenson in Seattle, Washington on June 4, 1910. He was the son of Sila Griffith and Clara Virginia (Brown) Climenson. Storm graduated from high school  in Seattle and became interested in mining, prospecting and writing. He turned to prospecting and treasure hunting during the Depression. There were no jobs he often said and he prospected in California, Arizona, New Mexico and Texas.

Storm arrived in Phoenix in the fall of 1937 with plans to search for the Peralta Mines in the Superstition Mountains east of Phoenix. He ended up at the YMCA Center in  Phoenix and was befriended by Art Webber, one of the founding members of the Don’s Club of Arizona. Storm advertised for adventurers in the local newspapers in January of 1937 to accompany him on a prospecting trip. This was Storm’s way of raising ventured capital for his prospecting adventures. He also wanted to author a small booklet with hopes of generating more income. Barry was successful at times attracting partners with substantial finances to support his expeditions into the Superstition Mountains.

Early in 1938, while prospecting near Aguila, he hurriedly put together a book titled Gold of the Superstitions which he published by the summer of that year. He had limited success with this booklet, but believed he could do a better job if he could find a backer who would support him for a future book.

Barry Storm just happened to enter the Goldwater’s Store in Phoenix in the late spring of  1938, and by accident he met Barry M. Goldwater. Goldwater was a young entrepreneur and an amateur photographer.  He was only twentyeight years old at the time. Storm talked Barry Goldwater into accompanying him on a hike into the  Superstition Mountains. He told his story to Goldwater and convinced him to finance his next book, On the Trail of the Lost Dutchman. Some old timers might have wondered why Goldwater would have supported Storm with his book writing venture. Just prior to Storm walking into Goldwater’s store, Goldwater had witnessed the success of Oren Arnold’s book advertised at the Korrick’s Department Store in down town Phoenix. “Why not,” he thought!

Goldwater also did all the photography for Storm’s book. Storm further convinced the Don’s Club through Art Webber to use his handsome gold currency covered book for their 1939  Superstition Mountain Gold Trek. The club thought it was a worthwhile  adventure and involved Barry Storm with their Superstition Mountain Trek for 1939. Senator Barry Goldwater once remarked, “The man borrowed my name and some money, but I enjoyed the experience with him in the mountains photographing his dreams.”

Soon after Storm’s experience with Goldwater he met a man named Fisher who had developed an electronic device for locating mineral deposits, but needed somebody to test it. Somehow Barry  Storm convinced Fisher he was his man. Storm took the M-Scope into the Superstition Mountains and tried it out. He claimed the Fisher Scope located the Peralta Land Grant Lost Mine in 1940. The publicity resulting from these claims launched Storm’s career as a mining expert and author. Storm was a so-called self-educated mining man. He had little or no actual underground mining experience. He had no formal geology  training, but he claimed to have enormous knowledge about ancient European mining (Spanish).

One of Storm’s best attempts at writing was his book Thunder God’s Gold in 1945. He wrote most of this book at Tortilla Flat after serving a short hitch in the United States Army Air Corps from 1943-1944.

The first time I heard the name Barry Storm I was a very young lad. My father and his friend Bill Cage were discussing the merits of Barry Storm’s book Superstition Gold in 1945, just before Storm’s book Thunder God’s Gold was published that same year. Prior to Storm’s book there were few publications that mentioned Jacob Waltz, the Peraltas or the Lost Dutchman Mine. The publications of Oren Arnold, Will Robinson, Mike Burns, Irwin Lively and a couple of other authors had tried to explain  the mystery of the Superstition Mountain and its alleged lost gold mine. These authors took a more romantic view of the Superstition Mountains, and Storm was the first to capture the story in an armchair adventure form. The reader could actually experience Storm’s excitement as he wrote about the Peraltas and the Lost Dutchman Mine. None of the other authors were as popular or as well circulated, other than Oren Arnold.

It was Storm’s Thunder God’s Gold that really took center stage when Columbia motion pictures decided to make a film based on the book in 1948. When Lust for Gold appeared in theaters the story of the Lost Dutchman Mine became part of the national spotlight. Not since the disappearance of Dr. Adolph Ruth in 1931 had the subject of this lost mine received such national interest. Storm wasn’t happy with how he was portrayed in the film. Columbia had portrayed him as the son of Jacob Waltz. Storm sued Columbia therefore delaying the release of the film for two years. The film still portrayed Storm as Waltz’s grandson when it was released in 1950.

Barry Storm was certainly one of “Coronado’s Children.” He continued to chase lost gold mines and treasures the rest of his life. He was a confirmed bachelor and always lived alone. Storm traveled annually to promote the sales and distribute his books.

Barry Storm spent most of his life chasing a dream and the latter years of his life were spent on a mining claim near Chiraco Summit, California. It was there he believed he would strike it rich with his Storm-Jade mine.

Storm was quite paranoid and believed somebody was out to kill him or steal his mine. He always carried a firearm. I visited Barry at his Jade mine in 1969. He  corresponded  with a variety of Dutch hunters around the country expounding his theories about lost gold in the Superstitions and other places around the country. Barry Storm was one of those ever lasting characters that legends were formed around. Barry impacted the Lost Dutchman Mine story more than any other person.

When I visited Barry at his mining claim I knew he was quite ill. The next thing I heard he had passed away in the Veteran’s Hospital in San Diego on January 5, 1971. This sage of lost gold and treasure history had passed on leaving a dramatic legacy on the stage of the American Southwest.

The last time I visited with him in the Superstition Wilderness area was at the Bluebird Mine and Curio Shopin 1967. We sat out front in some old chairs and talked about Superstition Mountain and the Lost Dutchman Mine, the Peralta Mine and even the mysterious stone maps. Barry still dominated the stage of western storytellers. He was just as dramatic about telling his story whether it was with one or fifty listeners. For the most part Barry Storm lived his life like a dream, always believing he would strike it rich in some way.
Posted by Apache Junction Public Library at 8:00 AM