Guide Books of the Superstitions 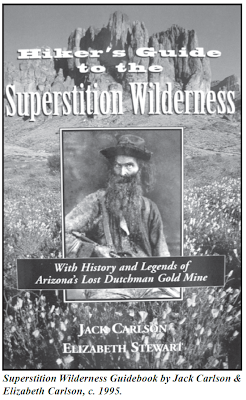 Dr. Sheridan’s book was followed by Dick and Sharon Nelson’s book titled Hiker’s Guide to the Superstition Mountains, published by the Telecote Press, Glenwood, NM, in 1979. Nelson’s book was a very popular guide book for many years. This fine book gave information about the trails and some of the interesting points along the trails. The book also presented a little of the history of the area, but primarily described the forest service trail system.

The Nelson’s book was followed by another book titled Hiker’s Guide to the Superstition Wilderness Area  by Jack Carlson and Elizabeth Stewart first published in 1995. The cover of this book includes a photograph of Elisha Marcus Reavis, known as the “Hermit of Superstition Mountain.” This three hundred and seventeen
page book provides excellent information on the history, trails, and terrain of the Superstition Wilderness Area. Reading this book would prepare the average outdoor person for the rigors of hiking the wilderness area. Carlson and Stewart provide preparatory material in their book on survival and other cautions one should take before embarking upon a wilderness experience.

Area search and rescue groups are constantly dealing with lost hikers and overdue hikers in the Superstition Wilderness Area. Presently there are four men missing in the Superstition Wilderness Area. One Colorado man has been missing since December 20, 2009, and three Utah men have been missing since July 6, 2010. All of them allegedly, according to family, planned their trips carefully for their trips into the Superstition Wilderness Area. The Colorado man, Jesse Capen, went into the mountains alone and basically just disappeared after setting up his camp above Kane Springs near the Peter’s Canyon Trail. The three Utah men parked their car at First Water and hiked into the mountains and vanished. I suppose the word “vanished” is a little strong, however that is exactly what they did. Not one single clue had been found that can be associated with these men.

I sincerely believed if they had use maps and guide maps properly and prepared themselves for the rigors of this mountain wilderness they would have been found a long time ago. Some people just wonder aimlessly about this vast wilderness with no maps or guidebooks. I sincerely believe maps and guidebooks are an important deterrent in preventing someone from becoming lost or disoriented.

Of course you can never overlook the importance of water. During the summer months when temperatures exceed 108 degrees a gallon a day is the very minimal amount you need to survive.

Jack Carlson and Elizabeth Stewart’s books are the best guidebooks available on the area. I would highly recommend them to anyone using the wilderness or interested in the history of the wilderness.
Posted by Apache Junction Public Library at 10:37 AM