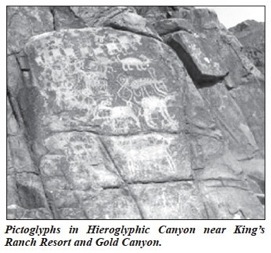 The Superstition Wilderness Area is a significant treasure trove of ancient archaeological sites belonging to the Hohokam and Salado cultures. Mixed among these cultures are the more contemporary Apaches and Yavapais.

It is difficult to estimate when early man first occupied these lands in what is known today as the Superstition Wilderness. Many archaeologists suggest ancient cultures were using the region for gathering and hunting subsistence as early as 350 B.C. There are lithics or stone tools that suggest a primitive hunting culture may have existence in this area 8,000 – 10,000 years ago. The Salado probably arrived on the scene around 800 A.D. These architects of mud and stone left several excellent examples of their work in the region. You might say their architectural ingenuity created structures that have survived the ravages of time.

More damage has occurred to the Salado cliff dwellings in Roger’s Canyon during the past thirty years then in the previous eight hundred years. This damage is the result of modern man’s ignorance to the fragility of these ancient structures. The ruins were in almost perfect shape at the turn of the century. When I first visited the site in 1948 with my father the ruins appeared as if the inhabitants had just moved out the day before.

Another interesting prehistoric ruin in the region is Circlestone. This 136- foot in diameter circular stone wall still defies complete explanation. The ruin is located on a grassy knoll 6, 010 feet above sea level. Knowledge of the ruin’s existences has been with us since the territorial days when the region was visited by early miners and cattlemen. Elisha M. Reavis was one of the first Anglo- Americans to mention Circlestone.

The theories associated with this structure are numerous; however actual explanations with supporting documentation are unavailable. Early visitors to the site believed Circlestone was a Spanish corral or fortress. Others believed the site was once used as an early U.S. Army’s heliograph station connecting the military post of Arizona Territory in the early 1870’s. Not until the 1970’s was the site accepted as an ancient Native American archaeological site. Today Circlestone remains as one of the major enigmas of the Superstition Wilderness Area.

The discovery of surface potsherds and fetishes has created interesting speculation about Circlestone. Mr. Sam Henderson, an earlier superintendent at Casa Grande National Monument, has suggested the site may have been used as a trading center or even a special ceremonial site. Other archaeologists have suggested the site may have been celestially oriented and used for ceremonial purposes.

Garden Valley was farmed by a small group of Hohokams probably a thousand years ago when the climatic conditions were more favorable. This large valley flat has more than 200 acres of arable land when there is a sufficient supply of water. Today mesquite and Chain Cholla are the climax vegetation in the area because cattle growers overgrazed the area. Cattle are no longer part of the setting and vegetation has climaxed over most of the valley.

A ruin was located in the center of the valley. This structure probably housed twenty-five to thirty individuals, while small caves on the fringe of the valley contained other families. Prior to 1930, the valley floor was literally covered with stone tools used by the ancient inhabitants who cultivated this special parcel of land.

Late in November of 1931, the Arizona Republican cosponsored an archaeological expedition into the region. The expedition was lead by the City of Phoenix archaeologist Odds Halseth. The expedition undertook selective collecting of surface artifacts and documented the location of each artifact before it was removed. Halseth, Harvey Mott and other members of the archaeological expedition made a cursory inventory of surface artifacts they did not collect. Several hundred lithics were inventoried on the surface, recorded, and left in place. Today, none of these lithics remain on the floor of Garden Valley. They all have been carried off by collectors during the past sixty-nine years. My father and I often walked through Garden Valley on our way to Second Water. Sometimes my father would take a side trip and show me the matates and manos. They were still quite numerous in the late 1940’s if you looked closely for them. The lithics and potsherds of Garden Valley were indicative of the Hohokam culture.

There is considerable evidence to suggest the Pimas gathered and foraged in the area long before 1500 A.D. The Pimas gathered the seeds of many plants common to the Superstition Mountain region including the cacti fruit and the seedpods of various legumes such as the Mesquite, Ironwood, Palo Verde and acacia. Another important plant was the Jojoba. The Apaches and Yavapais probably moved into these rugged mountains around 1500 A.D. They constructed temporary rancherias or farmsteads in locations such as Garden Valley, Frog Tanks, Dismal Valley, Rock Tanks, Reavis Valley, along Tortilla Creek and many of the tributaries draining into the Salt River.

Most of these rancherias or farmsteads were destroy during the U.S. military campaigns against the Apaches and Yavapais between 1864- 1868.

The Apaches and Yavapais used many of the caves and undercuts along Fish Creek Canyon, Tortilla Creek, La Barge and Boulder Canyon when they were pursued by the Army from Fort McDowell. The Native Americans often stole cattle, horses, sheep, goats, and mules and took them to the more accessible caves to be slaughtered for food. Bones of these animals have been found in caves along La Barge Canyon and Tortilla Canyons. It is estimated there are more than 2,500 archaeological sites within the boundaries of the Superstition Wilderness Area. During the past forty-five years I have recorded hundreds of sites on several maps.

The Superstition Wilderness Area is a fantastic artifact and heritage trove of ancient cultures that existed here for the past 1,000 years or so. It will take archaeologists a century or more to sift through the archaeological history of the Superstition Wilderness and develop a systematic history of the area. Until that time the National Wilderness Act will help to preserve this valuable resource for future archaeologist and scientist to study. Hopefully, visitors to the area will understand the importance of not disturbing these archaeological resources within the wilderness area. Educating the public about the significance of this resource is a very important mission of the Tonto National Forest.
Posted by Apache Junction Public Library at 5:51 PM