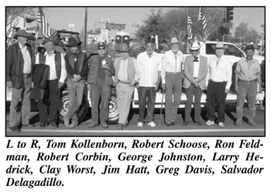 The Apache Junction’s Chamber of Commerce’s Lost Dutchman Days parade committee made an esteemed effort to preserve the history and legend in this manner. They assembled the largest group of local writers, historians, collectors, and builders of a legacy. Most of these individual have been involved with the tale of the Lost Dutchman Mine for more than forty years; some have been involved with the mountains for more than fifty years. It is for this reason the LDD Parade Committee picked ten Grand Marshals for the 2009 Lost Dutchman Day’s Parade. Congratulations to them for their foresight and planning for the future preservation of the history and legend of Superstition Mountain.

The Lost Dutchman Day’s Committee chose to put all these individuals on a single float. This challenge was answered with a 20 foot flat trailer and a row of hay bales in the center of the bed. Prior to our ride down Apache Trail we posed for a group photograph. I certainly want to share this photograph with you. Jayne Feldman took this photograph otherwise I couldn’t have been in it.

At precisely 10 a.m. Chris Hansing of Arnold’s Motors, did his volunteer duty for the day and pulled these ancient relics through Apache Junction on the old Apache Trail for 2009 Lost Dutchman Days Parade. Chris is a great outdoorsman and loves to drive his ATV. We warned him to take it easy or he might loose one these old Dutchman fossils along the Apache Trail.

I would like to write a little narrative about these individuals who rode on the Lost Dutchman Day’s Grand Marshal Float. Most of you know who I am from the many columns I have written for the Apache Junction News over the past ten years and I have lived in the area far to long. Some say over fifty years or more. I was the co-founder of the Superstition Mountain
Museum with Larry Hedrick and served on the board for twenty years.

Next to me is Robert Schoose, the founder of Goldfield Ghost Town. This is a man who moved to Arizona from California with a dream and followed through. First, he spent a little time in the early 1970’s looking for the Dutchman and found the pickings a bit lean. He and his wife LuAnn decided to build a Ghost Town along the Apache Trail in 1984. Today Bob and LuAnn’s achievement is a landmark along the Apache Trail northeast of Apache Junction.

Ron Feldman came over from California with a dream to discover the Dutchman’s Mine in 1966. He soon realized he needed income to search for gold so he opened a livery stable known as the OK Corral. He started this business with a burro named Phoenix. Today Ron and Jayne have one of the most successful stable operations in the Southwest.

Next is Robert K. Corbin. He moved to Arizona after law school in 1957, so he could hunt the Dutchman’s mine. He was Maricopa County Attorney and then the Attorney General of Arizona for twelve years, 1980-1992. Corbin has searched for the Lost Dutchman Mine since 1957.

George Johnston arrived here about 1952 and fell in love with the desert. He became involved with the Superstition Mountain Historical Society and served as President for several years. He was a columnist for the Mesa Tribune for several years.

Next to Larry Hedrick is Clay Worst. Clay has hunted for the Lost Dutchman Mine since the late 1940’s. He served as the first president of the Superstition Mountain Museum when it was first incorporated. Clay had dedicated much of his life to the museum and its goals.

Standing beside Clay Worst is Jim Hatt. Jim has dedicated more than twenty years to the search for gold in the Superstition Mountains. He has searched for the Dutchman and the Peralta lost mines. Jim served as director of the museum for a couple of years when the museum was located at Goldfield.

Another most interesting aficionado of the search for Coronado’s gold is Salvador Delagadillo. I first met Salvador in 1977 when he was working for a prospector in the mountains. Sal has been searching for the gold of Superstition Mountain for more than thirty years. Sal may never find the gold, but he has a heart of gold when it comes to helping others. Everyone knows about Sal’s willingness to help others.

Now you have the names of the ten Grand Marshals of the 2009 Lost Dutchman Days and parade.
Posted by Apache Junction Public Library at 1:47 PM