The Lost Dutchman Mine Store 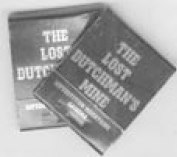 Two men had a dream of opening a small store and trailer park on the old Quarter Circle U Ranch road in the early 1980s. Ernie Provence and Tracy Hawkins wanted to fulfill a dream of living near Superstition Mountain and at the same time make a decent living.

Both men had searched the rugged Superstition Mountains for the Dutchman’s Lost Mine but the only thing they came away from their search with was knowledge of the area.

Their dream included building a business on their knowledge of the Superstition Mountains; hence the idea of the Lost Dutchman Mine Store and Trailer Park.

The spot they chose at Peralta Trail was really off the well-beaten path. The only available private land they could lease belonged to a Phoenix baker named Hill. Tracy and Ernie both invested their meager assets in the project.

Eventually, by 1984, they had a building up that could be used as a store. They sold a variety of things in the store including cold drinks. A store in the middle of nowhere was a challenge especially without electricity or water. They hauled all their water and generated their own electricity with an old one-cylinder diesel generator.

I will never forget the time Tracy took me on a tour of their power house. We opened the door, knocked down the spider webs, and watched a large rattlesnake slither away under the edge of the wall. It was certainly an interesting power house. The old one-cylinder diesel generator ran and ran for several years providing them with ample electricity to run a walk-in cooler, refrigerators, lights and cooling.

The Lost Dutchman Mine Store was the hub of action, you might say, in an area where there was no action. The proprietors of the store were always looking forward to a visit by customers. Ernie and Tracy offered a variety of interesting things for sale at their store. There were the usual Lost Dutchman Mine maps, treasure maps, a selection of antiques, different odds and ends, cold drinks and groceries on a very limited basis.

Ernie was proud of his free give-away match books. The match books were black with “Lost Dutchman Mine” printed in gold on their covers. These match covers were in demand by many collectors. The owners, operators and neighbors at the Quarter Circle U Ranch were the most common visitors to the store. Few people drove in from Peralta Road in the beginning. I visited the store for the first time shortly after Tracy and Ernie announced they were going build it. I must admit they really worked hard at building their dream in the beginning. It took them almost a year and a half to get the first building up, the generator in place and a water tower built so they could have water pressure.

Once the most needed amenities were in place Tracy and Ernie moved their families out to the site. They lived in mobile homes under quite primitive conditions.

By 1985 the store was becoming a novelty and several people did drive off the well-beaten path to Peralta Trailhead and visited the store near the Quarter Circle U Ranch. Ernie acquired a beer license from the State of Arizona and this helped business considerably.

The major problem with the idea of building a store and trailer park was finding water. They drilled a well near the store to over two hundred feet, but found no water. They then tried drilling a well near a small hill east of the store, but found no water at that site. These two projects devastated their investor’s money. Once it was decided there would be no wells in the area and it cost far too much money to run power into the area, the store began to decline. Ernie and Tracey couldn’t find any more investors after that. The word had gotten out.

After 1985 you could always find a crowd at the little store on weekends and hear a lot of stories about the Lost Dutchman Mine. A lot of the old-time Dutch hunters visited or hung out at the store and told their stories. Characters such as Chuck Crawford, Bob Ward, Lloyd Sutton, Dutch Holland and many others stopped in on occasion and told their stories.

Ironically, as the store grew more popular it began to suffer a tremendous financial loss. Operational cost of the store far exceeded the revenue the store generated. Ernie and Tracey both put their own money into the store to keep it going until the end of 1987. The final straw that destroyed the project was the lack of water. Every attempt to drill a well and find water failed. These drilling endeavors required all the capital Ernie and Tracey could round up. The survival of the store was dependent on the development of a small trailer park. It wasn’t meant to be. Soon the store was abandoned and everyone moved on

I have visited the little store several times over the years and watched it slowly deteriorate back into the desert. Like so many dreams on the desert the little store of Ernie’s and Tracey’s failed to generate a profit that would have insured its survival.

Recently my wife and I visited the little store to take some photos. Dreams still emerge on the landscape. A sudden rainstorm produced a beautiful rainbow that ended near the old Lost Dutchman Mine Store. The store had finally become a pot of gold at the end of a rainbow. Ironically this pot of gold would not save the old store from its state of deterioration.

As we drove away my wife and I thought about the many tales that still linger around that old Lost Dutchman Mine Store.
Posted by Apache Junction Public Library at 9:43 AM