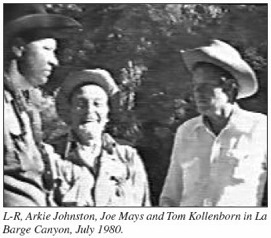 Probably one the more bizarre searches I have ever been involved in occurred in the summer of 1980. Like my friend Bob Corbin, I had sworn to stay out of the Superstition Mountains in the summertime. The extreme heat was dangerous, rattlesnakes were quite common, and not to mention water was at a premium. On July 2, 1980, a man named Joe Mays contacted me and wanted me to help him hunt for a crystal skull buried in the Superstition Mountains. I tried to laugh off his request, but I had this curious desire to hear his story out.

At first he sounded somewhat reasonable, but when he said he wanted to pack into the Superstition Mountain on July 6th I certainly had second thoughts. The temperatures were hovering around 110 degrees and the monsoons were late that year. So far there had been no relief from the heat.

I met with Joe Mays, Everett Johnston and three of Mays’ men at Cobb’s Restaurant in Apache Junction on July 5th. Joe explained to me that he had contracted Johnston, owner and operator of Peralta Stables on South Meridian Road, to pack him into the mountains for three weeks. Joe looked at me and said he wanted to hire me as a consultant in the mountains. He said I would only need to go into the mountain for a couple of days. Again I thought he was joking, but when he offered me six crisp new one hundred dollar bills to help him I soon changed my mind. Summers were always a lean period for me because I only worked nine months a year as a teacher in those days... but this consultant job was one I lived to regret.

At 4:30 a.m. on July 6th we loaded up the horses and gear at Peralta Stables on Meridian Road and drove out to First Water Trail Head. The rays of the sun were shining on us before we were saddled and packed up ready for our trip into a burning hell.

As we rode along the trail down toward Garden Valley and Second Water it started getting warm. We rode up East Boulder Canyon and then picked up the trail over to La Barge Canyon. Johnston was sure we would find water in La Barge Canyon above the Lower Box. Riding down La Barge about 11 a.m., again I realized I had made a big mistake. But it was too late to turn back at this point.

We found good water for the stock and ourselves in La Barge Canyon. We packed in all of our drinking water. Johnston planned on somebody going to town every day and hauling ice and drinks back to camp. Once at the site, the wranglers set up a large fly for a shade to eat and rest under. We had plenty of good food and lots of cold drinks. Once camp was set up I didn’t think it was going to be so bad after all even with temperatures above 109 degrees.

That evening when it cooled down a little we hiked down La Barge Canyon toward the Upper Box looking for the site where the crystal skull was supposedly hidden. Joe wandered up and down several small side canyons until he came to a spot where there was a very deep vertical crack in the rock. He peered into the crack a hundred feet or so and declared this was the spot. He immediately put his crew of three guys to work trying to break the rock. What an effort in futility!

These guys must have believed there was a ton of gold buried behind the crack the way they were trying to break the rock. Within 30 minutes or so Joe Mays determined we would need an explosive expert. I informed Joe it was against the law to blast in the wilderness without a federal permit. This permit soon became a point of contention between Mays and I. After a couple of really hot days of digging and scraping, Joe Mays abandoned the site and said he had been wrong. We started looking for another site.
It wasn’t long before Joe came up with another site. This was the day before my birthday, July 9th. I absolutely refused to leave camp on my birthday and ride or walk in the blazing hot sun. I planned to sit under the shade all day and drink Pepsi to celebrate my birthday. On the evening of my birthday it was decided that early the next morning I would go out with the pack horse and send Auggie, a wrangler, back in with ice and supplies. My time in the mountain was over... I thought.

I learned a lot on that trip. First of all, I couldn’t believe the money Joe was spending on this adventure in the Superstition Mountains. It wasn’t long before I found out Joe was spending an investor’s money on this whole operation. Furthermore, I couldn’t believe anyone would invest money in such a wild tale as a crystal skull hidden in the Superstition Mountains by the Aztecs 500 years ago.

I later found out Joe was using an ancient book as collateral for his adventure. When Joe’s stories began not to prove out, his investors told him stories about guys who were thrown in the Atlantic Ocean with concrete shoes. It was at this point he convinced his investors they should make a video documentary of this entire adventure. Believe it or not the investors thought this was a great idea.

Joe almost begged me to accompany them and help with technical information for the documentary. He told me if I didn’t he might end up in the Atlantic Ocean. I guess I took pity on his soul and continued with them until they completed the project at the end of July. Like so many things about the Superstition Mountains there was no Crystal Skull. I really think it was a figment of Joe’s imagination that he transposed from another story or legend.

Johnston and his crew ended up packing Joe and his group all over the Superstition Wilderness Area while they were filming a documentary that was never produced. They spent a week at the Reavis Ranch were it was much cooler. I rented a high quality video camera from Troxell Communications for this project.

Some twelve hours of tape was shot on the Superstition Wilderness Area. Before this operation was over Joe had spent more than $20,000 of his investor’s money. To this day, I don’t know what happened to the tape, but I did make a VHS copy of it and it is still in my files.

I swore at the end of July that I would never work in those mountains during the summer months again. Basically I have adhered to that rule for obvious reasons. Over the years many people have succumbed to the heat of the desert. It can really be dangerous if you are not properly hydrated.

The search for the Crystal Skull still remains as one of the most interesting and bizarre expeditions I have ever joined.
Posted by Apache Junction Public Library at 9:37 AM