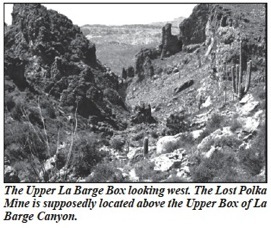 There has been a lot said about lost gold in the Superstition Mountains and the involvement of native Americans. The following is a story that supposedly occurred in 1960 in Milwaukee, Wisconsin and first began with a letter written by John Kochera to Robert Simpson Jacob on April 4, 1974. John Kochera wrote the following:

“With this letter I am enclosing a copy of the assays I had made on the ore we found. They are not too impressive. Just thought you might care to know. Also enclosed is a map that I will detail to you. I don’t have the money to search for it. I am a darn good prospector but a poor salesman. I can’t get any man with money to sponsor me in a search. So I am giving it to you. You seem to be an honest person and since you have about all the maps available I would like you to have these also. I hope you find it and if you do remember me in some small way.

“In 1960 I met an Apache Indian named Haywood. He was from the Verde River country in Arizona. He was in Milwaukee going to vocational school, which the government sent him to along with some others. We became good friends and one night he was over at my house and we had been drinking heavy. I started talking about finding gold in Mexico and then he told me this story.

“He said in the Spring of 1942, he and fourteen other men went on horses up the Salt River to La Barge Canyon then up La Barge Canyon to Squaw Box Canyon. They passed by the box canyon, than passed on the north side of three red hills. Then turned north about one mile and turned west to a hill north of the box canyon. There is a tunnel at the south side base of the hill, with brush and small trees nearly hiding it. They then went to the top of the hill and uncovered a pit. They took out about $50,000 in gold. When they finished they covered the pit again. The vein of gold is in a soft black rock and on both sides of the black vein is red rock.

“Haywood was thirty-seven years old when I met him. He believes strongly that something bad would happen if he told a white man, but since I am part Indian. He thought it would be all right. In July 1960, he and another guy died in a head-on crash with a tractor-trailer.

“For fourteen years I’ve kept this to myself and you are now the only person I’ve told this to. I hope it does some good for you. I personally believe this is the Dutchman’s mine. I wish I could search for it, but just don’t see how I can.

“I would appreciate hearing from you on what you think of this. I’ll close for now and if you have any questions I’ll be glad to help you out. I believe you are the person all this was pre-destined for.

Good luck and best wishes, Johnny Kochera.” This letter to Robert Simpson Jacob from Johnny Kochera is interesting and certainly a different kind of perspective on a story about lost gold in the Superstition Mountain region. Many of our readers are familiar with Robert Simpson Jacob and his operation in Squaw Box Canyon and on Peter’s Mesa for more than a decade. Johnny Kochera reported he heard many of his stories about the Superstition Mountain from Silas Haywood. According to Kochera he met Haywood when he was attending school in Milwaukee, Wisconsin.

Another man spoke about Silas Haywood on several occasions and said he actually met a man who worked with Haywood and heard the same story about the rock that was formed by alternating layers of red and black material. This same rock was filled with gold.

Stories often get confused over the years. The J.J. Polka story is very similar to the Haywood story, except it occurred in the area above the upper box of La Barge Canyon. The rock in the Polka story is almost identical to the rock in the Kochera story. There are several maps associated with these two stories.

Jim Butler, who knew Chuck Aylor, Roy Bradford and Abe Reid, spent a considerable amount of time searching for the ore associated with alternating layers of red and black rock filled with fine gold. Butler was familiar with the Polka story and the man named Silas Haywood. I don’t dare try to figure out the exact relationships between these individuals and how much they knew about the Haywood story. As far as I know most of the knowledgeable “Dutch” hunters knew something about this story. There were many simple and some complex versions of this story.

The Kochera letter of April 1974 did shed a little light on the subject of the lost gold ore in the Superstition Wilderness Area and the origin of the story. When Kochera talks about Silas Haywood and fourteen other men making a trip up the Salt River in 1942, I find it difficult to believe they rode up La Barge Canyon from the Salt River. There were enorThere were enormous obstacles to overcome with such a route. First and most important there is a large lake in the way. Possibly Haywood and the fourteen men were hauled with their horses to a point just east of Boulder Canyon and rode south into La Barge Canyon. Many individuals believe all stories of lost gold must be checked out thoroughly.

I first heard about this story while working on the Quarter Circle U Ranch in 1955. Jim Butler was still active in the mountains with Chuck Aylor and others. Butler stopped by the Quarter Circle U Ranch hoping to acquire access to the region east of the ranch. He asked for permission to use the road going through the ranch. I told him he would have to talk to Bill Barkley. Butler then told me a little about the mine he had been looking for. I believe he called it the Lost Polka Mine at the time.

It could be Haywood and Kochera were talking about two entirely different locations. Only time will prove it out. To this day I have doubted the existence of Silas Haywood and furthermore, neither I nor my research associates have found any documentation to support the concept that Johnny Kochera was part Native American. Searching for the truth often makes stories very complex and sometime difficult to accept, except as legend.

Author’s note: It is difficult to document or prove the existence of Silas Haywood. Could it be Johnny Kochera used the name to kept his story safe from those who might research thoroughly the background of Silas Haywood? Could this be the reason for the deception on Kochera’s part? Only research will prove or disprove the existence of Sila Haywood.  Tom Kollenborn
Posted by Apache Junction Public Library at 5:36 PM