A Word of Caution About Gold 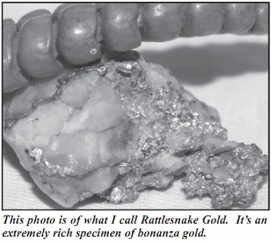 The price of gold is sky rocketing above thirteen hundred dollars an ounce, but buying gold can be a very risky business because of fraud and a variety of investment schemes. As the value of gold continues to escalate the fascination for finding lost gold and buried treasures also escalates. The gold market goes up and continues to drive the interest of prospectors and mine promoters to search for new deposits.

The search for lost gold deposits and new deposits has intrigued and fascinated the average person for decades. Large mining companies continue searching and drilling for gold deposits with the increasing value of gold.

We often think of lost gold mines in terms of maps and clues. A serious lost mine hunter will begin his or her research with a thorough investigation of available records associated with a given area or story. These documents will include records from vital statistics, census, probates, taxes and real estate ownership. If all of these records are exhausted and there is still no mention of the person involved with the lost mine or treasure it is often presumed at this point the story is nothing but an unsubstantiated tale (or to be more exact a myth).

When no proof exists of the main character’s involvement, it is then apparent the story is nothing but a legend based on hear-say. These stories often amaze objective historans. Why do treasure hunters and lost gold mine searchers place so much value on what they believe to be truth based on weak subjective stories accredited to faith or belief in another individual’s story to be factual or true?  Often intelligent wealthy professional men or women fall prey to such rhetoric and dogmatic story telling.
Robert Simpson Jacob was a man who could sell any idea if given the proper opportunity and setting. Jacob was known as the man with the golden tongue, not silver. Long before Robert “Crazy Jake” Jacob arrived on the infamous Dutchman’s Lost Mine stage there were men like Dr. Robert A. Aiton, Dr. Rolf Alexander, and many more who had acted before him.

Jacob was unique because of his success at accumulating  a fortune in just eight years. He was a master of deception. He told investors what they wanted to hear. The Arizona Attorney General’s Office estimated Jacob accumulated more than thirty million dollars during a five-year period, however they could account for only nine million dollars with documents.

To this day there is no sound explanation or accounting for that money or what happen to it. Robert Simpson Jacob passed away in the summer of 1993 leaving no information or a confession as to what happen to the nine million dollars he had accumulated. The reason for this paragraph was to explain the ability of some to raise money honestly or dishonestly.

There are men who came to these mountains to hunt for gold, lost mines and treasure who were reputable and honest individuals. Richard Peck, Alva Reser, Robert Corbin, Walter Gassler, Ron Feldman, and many more searched based on their integrity and honesty. Treasure hunters who really believe in their search for riches usually don’t want any partners. Their avocation is a solo practice. They are often very secretive about their information. Local historians and prospectors will always tell you a true “Dutch hunter” is a very solo and secretive individual. I am redundant here purposely to make a point.

Since Jacob Waltz died in 1891, there have been many attempts to defraud people with stories of lost gold mines in the Superstition Mountain area. You can prevent yourself from being a victim, and here are some hints. Don’t give anyone cash for an investment that sounds far too good to be true unless you have a witness and a signed contract.  Don’t make any deals without a witness who can back you up, if need be in court.

Many years ago a handicapped man approached me in a class I was teaching and asked me to help him get an investment back. He explained to me the federal, state, county and city authorities would not assist him. I soon found out why. He had given a local prospector (con artist) five thousand dollars in a paper sack. He had no witnesses or proof of the transaction. What he thought he was purchasing was gold bullion half the price. Of course the local prospector didn’t deliver and the man demanded his money back. The prospector said he never gave him any money. In the final analysis, what this boiled down to was one man’s word against another. There was no contract, no check and no witnesses. The authorities had nothing to build a case on. Sadly to say the gentlemen lost his five thousand dollars. A lesson hopefully well learned.

Most people laugh and say this can’t happen to them. I agree it can’t, however when someone produces a considerable amount of gold and claims they have a rich mine in the Superstitions, then they further claim the government won’t let them mine it legally, but they will secretly sell their gold at half of spot with cash up front. Such a proposal like this can be quite tempting. Most intelligent people will immediately spot red flags on such a deal. This happens in the Apache Junction area a couple times a year.

My advice is to be very cautious about giving any cash to anyone for any kind of a gold deal. I would contact the state fraud division or the local police and report suchactivity. Any time you can buy gold bullion for half the spot price it is too good to be true. Anything that is too good to be true is generally a fraud of some kind. If you suspect some kind of fraudulent deal you should report it to the authorities before somebody loses their life savings or money they can’t afford to lose.

Arizona, New Mexico, California, Utah and Colorado suffer from more gold mine and treasure fraud then any other states. The reading public is fascinated with the American Southwest and all the tales of lost gold and treasure.

Hundreds of books have been written on the topic and people continue to believe hidden gold lies out there waiting for them if they can just put certain clues together. Golden riches is the bait these con artists use to separate their victims from their life savings.

Again, any kind of gold deal should be carefully scrutinized by knowledgeable individuals in the area of investment or banking before you invest your hard earned dollars into gold or the precious metal market.
Posted by Apache Junction Public Library at 5:38 PM