A Letter from the Past 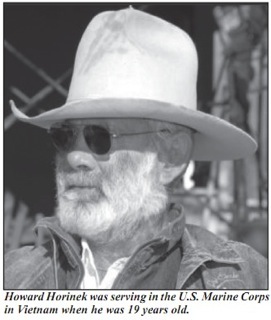 Recently I received an e-mail from Karen Rath from near Melbourne, Australia. She was inquiring as to whether Howard Horinek, a cowboy I had written about in one of my columns (AJ News, pg A4. Col. 3-6, 03/10/2008) was actually the person she corresponded with more than thirty years ago as a pen pal.

She wrote in her e-mail when she was a teenager she enjoyed writing letters to young men in the military. At the time Howard Horinek was serving in the U.S. Marine Corps in Vietnam. He was 19 years old and he was in the middle of a war he didn’t fully understand. This was almost 40 years ago. Karen asked me in her e-mail if this Arizona cowboy I wrote about had the middle initials H.H. She had lost track of Howard after the Vietnam war, but she did tell me she sent him some photographs of herself.

The following weekend I drove out to the Quarter Circle U Ranch and looked Howard up. I found him feeding and working on a gate. I walked up to him and said some lady in Australia read the Chronicles article about you. She believed you were her pen pal some years ago. Her name was Karen Rath. I didn’t recall Mrs. Rath’s maiden name, but the minute I explained the details of the e-mail Howard he recognized her as one of his pen pals while in Vietnam. He said he still had photographs of her she sent him. Her photographs and letters were very comforting during this very violent period of his life.

I asked Howard for his address and told him I was going to e-mail it to Mrs. Rath in Australia. I told him she and her entire family was excited about this link to the past. She had now been married 30 years and has two grown sons. They raise and train champion quarter horses in Australia. Interesting enough Howard has done nothing but cowboy for the last 40 years on ranches throughout the southwest.
What are the odds a distant Australian would be reading one of my columns and spot a pen pal from the Vietnam War era. Actually I was almost overwhelmed with emotion when I realized this was actually happening. When Howard said, “Yes I remember her and I have a photograph of her still.,” — what a wonderful feeling I had about the AJ News bringing them together again after all these years and also realizing Howard had survived a very brutal and deadly war.

Believe me this is one of my proud moments writing these columns. I have known Howard for about 10 years and have visited with him on many occasions. The Rath family is looking forward to hearing from Howard. It wouldn’t surprise if Howard makes a trip to Australia for a visit.

How about a real American cowboy in Australia at the Rath Quarter Horse Ranch?
Posted by Apache Junction Public Library at 5:41 PM