The memory and dreams of major league baseball in Apache Junction faded when Geronimo Park was dismantled and the materials sold to the Mesa Unified School District in 1969. Geronimo Park (where the Apache Junction Moose Lodge stands today) had been the winter home of the Houston Colt 45s (now Astros) some forty-eight years ago.

The Colt 45s were an expansion team in 1962, the same year the New York Mets made their major league debut. There are not too many of us around today who remember the Colts being here for winter training, but I recall Jerry Burgess being a batboy for the team. Jerry later graduated from Apache Junction High School and went on to serve on the Apache Junction City Council after the city was incorporated in 1978.

When the ballpark was planned and construction started in the fall of 1961 the project was the “talk of the town.” A group known as The Lost Dutchman’s Baseball Association financially backed the project. The association contracted PG&R Engineering Co. of Phoenix to build the park for an estimated cost of $20,000. During construction there were weekly reports in the newspapers about the park’s progress. Even the length of the grass (turf) and the date it was first cut was reported in the news. By mid November 1961 the park was rapidly taking shape. It was at this time it was discovered the park had no name. 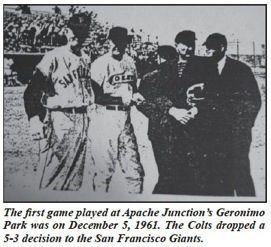 Gene Chambers, president of The Lost Dutchman’s Baseball Association started a contest to name the park and offered two season tickets to the winner. A name was not chosen until mid-January when the “Name the park contest” ended. Victoria Vala of Riverside, Ill. entered the winning name for the park. Her nomination, “Geronimo Park” was selected.

The first game was played in the park on December 5, 1961. The Colts dropped a 5-3 decision to San Francisco in winter league play. On December 15, 1961, manager Paul Richards announced the Colts would officially start spring training at Geronimo Park on March 10, 1962.

The new park was almost completed and named when it ran into financial difficulty. Members of The Lost Dutchman’s Baseball Association put out a call for funding and support from local merchants. The local support came through and the park was completed. 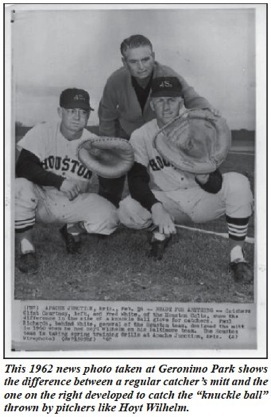 Bill Giles, traveling secretary for the Houston Colt 45s, announced that Apache Junction was destined for fame with baseball as a headliner. Giles further announced arrangements had been made to broadcast all of the team’s spring training games over the network of sixteen stations covering Texas, Louisiana and Arkansas.

It was a big day on March 12, 1962, when William W. Creighton, president of Lost Dutchman Baseball Association tossed out the first ball. He was a substitute for Governor Paul Fannin who had originally been scheduled for the event.

After six weeks of Cactus League play the Colt 45s left Apache Junction short of the $24,000 they had been guaranteed at the gate, but vowed to return the next year for spring training.

Yes, they did return in the spring of 1963, however after March of that year baseball’s spring training was over in Apache Junction. Geronimo Park was a long trip from the rest of the Valley and there was no Superstition Freeway in those days. Unfortunately, Apache Junction (with a population of around 3,000) did not meet the Houston Colt 45s expectations as far as attendance at their games.

So, by 1964, no longer could you hear the crack of a bat or the cheers of the fans in Geronimo Park. The treasure of major league baseball had slipped away from Apache Junction.
Posted by Apache Junction Public Library at 5:34 PM