The Legend of the White Stallion 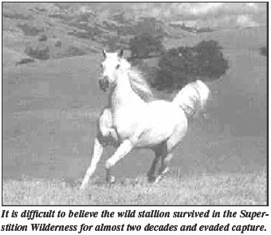 Several years ago an old friend of mine, Dan Hopper, told me a story about a white stallion he and his father often observed in the Superstition Mountains during the 1960’s. Dan talked about one particular trip he and his father had made down into Second Water Canyon. As they hiked through Black Gap at the northeast end of Garden Valley they saw a beautiful white stallion on the skyline to the south. Dan’s father took a picture of the stallion as it stood cautiously and watched them pass by.

Dan quizzed me as to the origin of this beautiful stallion. I found his story extremely difficult to believe for several reasons, however I knew Dan did not just make up stories. I respected his opinion and story about the white stallion in the Superstition Wilderness Area.

I decided to investigate the story by talking to several people I knew who had spent a lot of time in the Superstition Mountains between 1965-1995, a period of thirty years. On a cool December morning I rode into Needle Canyon to visit with Edwin Buckwitz. I asked Edwin if he had ever observed a white horse in the Superstition Mountains. He looked at me in an inquisitive manner and said, “Of course I have seen that great white stallion.”

Edwin had searched for the Peralta gold off and on since 1965. He was a very honest individual and never really lied to me about anything over the years. If he said he saw the white stallion, I could believe him. I continued to pursue the story of the white stallion.

I worked for the Barkley Cattle Company in the late 1950’s and I knew Barkley would have never allowed wild horses on his range. Any livestock other than the units allotted on his grazing permit cost him money. Barkley may have allowed a few of his own horses on his range, but never a stallion. Most of the horses owned by Barkley were geldings and I don’t recall him owning a mare. Gelding’s are less problems on a cattle ranch.

Another possible source of the white stallion was the Indian Reservation across the Salt River. Indian horses were known to cross the Salt River near the confluence of the Verde and then make their way up the Salt then into the Goldfield Mountains and across the Apache Trail into the Superstition Wilderness Area. The Indians had a lot of broomtail stallions on the reservation, and this could explain a white stallion in the Superstition Wilderness Area.

As I continued to search for possible answers, Dan finally produced a picture of his father had taken the white stallion standing on a ridge near Garden Valley. There was no question the horse was a stallion. I had not doubted Dan’s story, but I did want to collaborate it. I talked to another old friend of Chuck Aylor. He had also observed the stallion in the Second Water-Garden Valley area. Al Reser, an old timer prospector, also told me about seeing the stallion on several occasions. I was now convinced the white stallion existed.

I worked for the Barkley Cattle Company until June of 1959, and did not know of any horses that had been turned out on to the Barkley range. When William Thomas Barkley was no longer capable of managing the ranch because of health problems, I wondered if he might have turned his old horse out on the ranch. “Champ” wasn’t a true white, but a gray. Monte Edwards, a prospector and airline pilot, told me he saw the horse several times the winter of 1966-67. I must confess I had never observed the white stallion of Superstition Mountain, but I had seen signs of him.

Several years ago I found out the truth about the White stallion near Second Water. This beautiful animal had belonged to an old cowboy who lived in eastern part of the Salt River Valley. He was diagnosed with a terminal disease and decided to release his horse in the wild. I just can’t imagine an old cowboy releasing a horse in the Superstition Wilderness Area knowing the rules and regulations the forest service has pertaining to unassigned livestock on Taylor graze. Secondly, it is difficult to believe the horse survived for almost two decades and evaded capture. The man who told me this story would not reveal the name of the man who released the horse.

From what I have been told the horse roamed the Superstition Wilderness Area for almost two decades. The white stallion had been observed from one end of the wilderness to the other. I was told the horse died of natural cause near the Tortilla Ranch in 1984. This wild, white stallion could be the source of the name Whispering Horse Canyon near the Apache Trail about three miles east of Tortilla Flat.

The spirit of that white stallion still roams the rugged Superstition Wilderness Area in the minds of those who love to wander this endless and pristine region thinking about its’ legend and lore.
Posted by Apache Junction Public Library at 10:46 AM