The Camera is My Ticket to the World 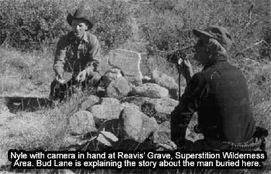 I recently attended a friend’s funeral in Mesa. He was a wonderful father, husband, and friend. He had four children. They were Alan, Robert, David and Susan. He was a world renowned photographer. His photos have appeared in major magazines world-wide. Several years ago he retired from the Arizona Republic & Gazette after thirty-two years. But he never did lay his camera down. The camera was his ticket to seeing the world.

I first met this man and his wife while hiking the Superstition Mountains in the late1940’s or early 1950’s with my father. We met again on a trip down the Colorado River from Lee’s Ferry to Lake Mead. Nyle was doing a photo story for the Arizona Republic about rafting on the Colorado River.

I was teaching an introduction course to the Geology of the Grand Canyon with Jim Palmer for Arizona State University. Shortly after this trip Nyle Leatham made several trips into the Superstition Wilderness on photo assignments for the Arizona Republic.

Nyle Burnham Leatham was born in Mesa, Arizona on July 27, 1930. He grew up in Mesa and attended Mesa Public Schools.  He was a life-long member of The Church of Jesus Christ of Latter Day Saints. Nyle and his lovely wife Carol met at Mesa High School and began dating when they where sophomores. He was already interested in photography. Nyle and Carol graduated in June of 1948 and were married in the Arizona Temple on September 17 of that same year. Nyle and Carol spent much their leisure time hiking in the Superstition Mountains, camping, fishing and taking lots of pictures. 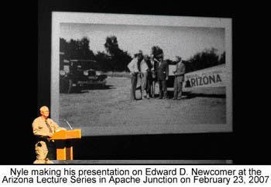 Nyle’s introduction to professional photography came when he entered the United State Air Force. He attended aerial photography school in Colorado. He was then transferred to California were he studied still photography. He traveled to North Africa, Japan and other exotic places around the world as a military photographer. Nyle loved Japan and his many flights over the Orient. He saw many unique and interesting places. He even climbed the world famous Mount Fuji in Japan!

Upon his return from the Far East, he and his wife Carol traveled around the Western part of the United States. They stopped in Montana to visit their old friends Clay and Muriel Worst. Nyle and Carol had met Clay along the trail between First Water and Aylor’s Camp in East Boulder Canyon in the Superstition Wilderness Area east of Apache Junction. The four have been friends for more than sixty years. After his military career Nyle went to work for the Arizona Republic as a photojournalist. He loved his work. He photographed countless people, places, and events. He photographed the rich, the poor, the famous and the not so famous.  He was published in many major national and international magazines and books. His photographs of the Superstition Mountain area and Arizona have appeared in the pages of the Arizona Highways on several occasions.

Nyle retired from the Arizona Republic after thirty-two years. He then started another career photographing shooting matches. Nyle called his camera his “Magic Carpet to the World,” and the camera has certainly served that purpose for him. He has photographed from hot air balloons, airplanes, helicopters, trains and ships. He has taken his cameras into operating rooms, forest fires, mountain tops, deep mines, scuba diving, and mountain climbing.

Nyle made many trips into the Superstition Wilderness Area with me over the years because of his love for the area.

He traveled to and photographed Circlestone and Roger’s Canyon for the Arizona Republic. He photographed several of my classroom horseback trips in the Superstition Wilderness Area. He enjoyed working with children. One of his classic photographs was a photo of Kendra McKinney, 12 years old and Sammy Marquez, 13 years old both of Apache Junction, on a horseback trip in the mountains in 1975.  At the time they were students at the Apache Junction Jr. High School known today as Desert Shadows Middle School.

Early in December 1975, Nyle accompanied a group of horsemen into the Superstition Mountains to visit the old Reavis Ranch. The group experienced a blizzard that dumped about ten inches of snow in the area. The plan was to return to Apache Junction in five days, but the group was delayed because of deep snow drifts and dangerous trail conditions.  This caused a bit of concern among families members that knew the group was in the mountains. The weather was extreme, however they were prepared. The tired riders finally arrived at Tortilla Ranch on the six day and rode out the following day to the Apache Trail. Nyle’s photographs of this trip recorded the anxiety of several riders that made this trip.  Nyle’s photographs of the pack trip were featured in a special Arizona Republic tabloid called the Arizona Adventure.

The Arizona Republic followed this article up with a spectacular display of Nyle’s photos of Roger’s Canyon Cliff Dwellings. His photos emphasized detail rather than dimension. Shortly after this trip Nyle Leatham rode to the top of Superstition Mountain with me. I believe, at first, he had his doubt about how a horse could make it to the top of Summit 5024. After that ride Nyle told me he would never doubt me again. I warned him we were lucky this time. Shortly after the ride to the top of the mountain we hiked up Monument Canyon with his sons Allan and Rob to inspect an old AT-6 plane crash.  Nyle and I discussed a variety of project over the years that were important to the preservation of Arizona history. I have always respected his knowledge of Arizona History and its preservation. Early in October of 2006 I invited Nyle to be a speaker for the Arizona Lecture Series. I knew without a doubt who he would like to talk about. He put together an excellent program on Edward David Newcomer, the first photojournalist for the Arizona Republican. He made that presentation on February 23, 2007. The Arizona Republican was the forerunner of the Arizona Republic.

From the rapids of the Colorado, to the mountain tops of Japan, to the trails of the Superstition Wilderness Area, to national shooting competitions, or lecturing on his favorite topic Nyle Leatham was a scholar, an intellect, a man of integrity, a man of his word and most of all a wonderful human being that anyone should be proud to have known. His photographs and his face were known by many in the Apache Junction area.  Nyle thanks for introducing me, so long ago, to the world of photography and its importance in preserving history.

I would like to thank Nyle’s wife Carol for her assistance with this story.
Posted by Apache Junction Public Library at 10:43 AM