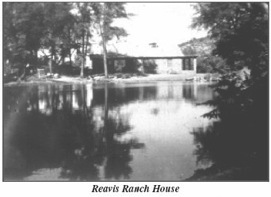 A clap of thunder, a flash of lightning and the threat of rain made the old Reavis Ranch house a haven to weary hikers, horsemen and cattlemen who rode or walked the trails of the eastern portion of the Superstition Wilderness Area for almost three decades. This old skeleton of a ranch house survived almost thirty years alone in the heart of the Superstition Wilderness Area with little or no maintenance. Many friends of the old Reavis Ranch house tried desperately to help the old ranch house limp into the Twenty-first Century.

The Friends of the Reavis Ranch cleaned, cleared, hauled trash off and repaired the old ranch house for more than a decade. Their effort was a labor of love, nothing more. We all understood the character and spirit of this old house after spending a few days in it. The roar of the fire place, the clanging of the tin roof, the wind blowing through the breeze way and the attic, the squeaking of a door hinge were sounds all of us were familiar with. The beauty and solitude of this valley has made it a popular destination for hikers and horseman.

Since 1956, I have traveled to and from the Reavis Ranch on foot, horseback and by vehicle on many different occasions. I can recall the old road and how rough it was between Castle Dome Corral, up through Windy Gap and on to Plow Saddle. I can remember the friendly smile of Alice Stone and the strong hand shake of Floyd “Stoney” Stone when welcomed to their mountain ranch. I can recall the closing of the road and Mary Leonard’s article in the Arizona Republic about the old ranch in 1967. Only those who have spent a weekend or a month at the old ranch in Reavis Valley know what we have lost. The Reavis Valley is a pristine ecological niche of the Upper Sonoran Desert with the old ranch serving as a window for human kind.

The Reavis Ranch house burned down sometime around Thanksgiving 1991. The old ranch house has been gone for more than sixteen years. The old house was constructed about 1937. The ranch was patented by the Clemans Cattle Company in 1919. William J. Clemans purchased the ranch from John J. Fraser in 1909. Fraser had acquired the ranch shortly after the death of the old hermit “Elisha” Marcus Reavis in 1896.

Clemans and his two sons, Earl and Mark Twain ran the ranch from 1910-1946. Billy Martin Sr. served as foreman of the Clemans Cattle Company from 1915-1946. Prior to Martin, William “Billy” Knight served as foreman from 1891-1915. Still to this day there are old catch pens deep in the forest made entirely of wood, not one nail or a piece of wire was used in their construction. The range was so brushy the Clemans’ cowboys had to trap a lot of their cattle.

The Reavis Ranch road was started in 1910 by a group of Mesa promoters who wanted to sell lots in the pines south of the Reavis Ranch. They never completed the road. Bacon and Upton purchased the ranch from the Clemans Cattle Company around 1946. The road was completed by Bacon and Upton in 1948. Floyd Stone, Bacon’s son-in-law, and Kenneth Lockwood purchased the ranch in 1955 from John A. Bacon and Upton. Stone and Lockwood sold the ranch to the United States Department of Agriculture in 1966 for $80,000 and twenty acres of patented land near the Apache Trail.

Shortly after the government purchased the Reavis Ranch they closed the access corridor. The reason for the closure of the road was the extreme maintenance cost and the danger to vehicular travel. After the road was closed in 1967 only hikers and horseman were able to access the Reavis Valley and the ranch.

When news of the Reavis Ranch fire spread among those who had visited the old ranch over the years a sort of sadness prevailed. I suppose many of the wilderness purists believed the fire was a blessing to the wilderness concept. Many hikers and backpackers were disappointed to find their severe weather haven destroyed by fire. Now outfitters and packers will have to carry more gear and take more animals to provide adequate service to their customers.

Many will just miss the old ranch house because of the nostalgia associated with it. I must admit I really enjoyed being a part of this history. The destruction of the old Reavis Ranch house ended an era in the history of the Superstition Wilderness Area. Settlers and cattlemen have lived in the valley since 1874.

The Reavis Valley had served as the first Camp Geronimo for the Boy Scouts in 1920, before the Spade Ranch north of Payson became their permanent home. Arizona’s Governor Campbell rode horseback to the Reavis Ranch in 1920s to visit with the Boy Scouts at Camp Geronimo (Reavis Ranch) and tell them stories around a campfire. Even post cards told the story of the idyllic Reavis Valley.

I visited the Reavis Valley in 1994, not for the last time, but to see the old ranch house once more. The walls were still standing and the chimney towered above the old house like a monument to the past.

I returned to the site of the old Reavis Ranch in October of 2000. None of the walls of the old ranch were standing. All that remained was the concrete slab the old ranch house was constructed on. I was amazed how obliterated the site was. All human history had just about been removed and the valley had been almost returned to its pure state.

Like all man-made things, the Reavis Ranch was just a temporary fixture on the landscape destined to be destroyed someday. Those who knew the old house undoubtedly had a better understanding of man’s mark on the wilderness and the value of this place.
Posted by Apache Junction Public Library at 10:42 AM